Malaysian hair experts share their tips on how to cut your hair and ideas on what to do with your hair during MCO.

Hair growth is something we cannot control during this extended movement control order (MCO), so as your hair is getting out of control from longer fringes to out of shape hair that is just ruining your already ruined day(s), here's something you can really do, with the help of hair experts.

Now that the Government has reversed the decision to allow hair salons and optometrists to reopen, Malaysians will probably have to resort to cutting their own hair at home now.

To tackle unruly hair and for those who need to look presentable while they are working from home and are doing Zoom video conferencing or taking WhatsApp video calls, here are some tips from hair experts - all of whom opted not to open their hair salons as the safest option, even though the Government had initially allowed them to.

Poh worked on a male and a female model, giving simple hair cutting tips on what to focus on and how to cut hair at home during this MCO.

“For those who are not confident of cutting their own hair or don’t have someone to help them cut at home, then for guys they can use hair products such as a gel, clay, mousse or hairspray to comb the hair upwards nicely for a tidy look. For women, they can use a hair cream to neaten the hair, and tie up their hair so they can look presentable in video calls, ” Poh says. Shawn Loong, founder of Shawn Cutler and L’Oreal Professionnel Artistic ambassdor, says, “Keeping your hair clean is most important especially during MCO. Hair will start dropping when it’s not kept clean or from the use of wrong hair products, ” says Loong.

“For men, there are a lot of DIY hair clippers available online. For a safe haircut at home, men can just use an appropriate clipper (Clippers come in numbers denoting the amount of hair length that is left when used) to just shave off their hair on the sides as a temporary haircut. If you’re an expert you can use a number one clipper, number two clipper is the common one, while number three clipper is for longer hair or when you want to shave bald.”

He points out that it’s so much easier now with DIY haircutting tutorials online so check these out first before you start cutting your own hair. Before cutting your hair at home, Shawn Loong says there are many DIY haircutting tutorials online so check these out first and the most important is to keep your hair clean with the right hair products. -- Shawn Loong/Shawn Cutler

For women, Loong says their hairstyles can generally last longer than men’s and for long hair they can just tie it up.

“The problem for women would mainly be their fringe. For now, they can use a hair clip to keep their longer fringe away from their face and eyes. If it’s a thin fringe, then use a scissors to slowly trim its length. Thicker fringes will need some expert cutting skills otherwise you will end up with a bad haircut, and when women have a bad haircut there will not be any peace!" Loong says.

Albert Nico, founder of Albert Nico Boutique Salon and L’Oreal Professionnel Artistic ambassador, says, “Most people don't have the tools available to get a salon-worthy haircut at home. When it comes to at-home haircuts, it's best to stick with a simple trim -- leave the complicated stuff to the professionals".

“For men’s hairline ends, I would highly recommend the person cutting the hair to use a clipper or scissors, and do each part at least two times.” Albert Nico says when it comes to at-home haircuts, it's best to stick with a simple trim and to leave the complicated stuff to the professionals. -- Vision Studio

Aside from a clipper or trimmer for men, Nico says the tools needed for men and women, are a big or medium sized mirror, hair clips, hairdressing scissors thinning scissors, cutting comb, spray bottle and a hair dryer.

“Honestly, it’s not easy for someone who has never cut their own haircut to do it themselves. Instead of cutting their own hair, maybe take this time during MCO to embrace change and think about a different hairstyle, ” says Datin Winnie Loo, founder of A Cut Above Salons and Academy, and MHA Honorary president. Instead of cutting your hair during this MCO, Datin Winnie Loo suggests embracing change and maybe thinking of paving the way for a new hairstyle, by leaving your hair longer now. -- ART CHEN/The Star

“For women with short hair, instead of cutting it as it will be harder for short styles, try growing out your hair so that in two to three month’s time when the salons reopen there will be extra inches of hair for the hairstylist to restyle it for you. This is especially for those who are not confident of cutting their own hair and possibly getting it messed up at home.”

For those bold enough, Loo says to try point cutting. Lift hair up and don’t cut in a straight line. Instead, do pointy cutting so it will end up looking as though you have a bit of a shaggy layer with some movement. This applies for the fringe as well.

“If you have a bit of knowledge on creative haircuts, those with longer hair can comb your hair, bring hair over and to the front of your head, tie it into a ponytail and cut off the lengths in a straight line as this will give you a long layered look once you let go of the hair. There are many YouTube tutorials on achieving this.”

Loo says it’s easier for women who can put their hair up in a ponytail or braid it, and it need not be about cutting hair but more styling their hair to look presentable.

“For men, they can use a clipper to clip off the sides. As long as the sides are nice and neat, they can overcome the top being longer. Get a family member to help shave off the longer ends at the back of the head. Work with a good hair product like a moulding mud, gel or good spray to keep hair in place. A slightly longer look would be nice for a younger man, so they have another look during lockdown.”

For older men, it may not be so easy as they tend to have concerns over what look they should have, says Loo.

“For now, more mature men could just keep it nice and neat, and rely on products to slick longer hair back. Not many men would want to shave it all off. But, for those who have invested in clippers, they can use attachments of number three or six, depending on how close or short you want to cut, ” Loo advises.

Cutting your hair at home? Clipper brand Wahl has these tips

Guys, cut your own hair at home with these pro tips 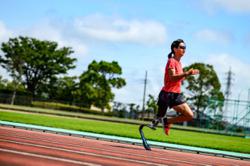 Why the Paralympics mean so more than medals