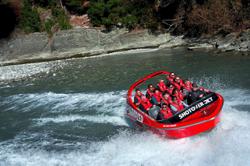 When Ross Hall started to think about his will over 15 years ago, he had an epiphany. "Suddenly I was absolutely sure that I didn't want to be cremated or buried in a simple brown box. My life has just been too special," the 64-year-old New Zealander says.

Thus was born the idea for Dying Art.

His company manufactures individual, often colourful coffins that represent the preferences and passions of the person within.

From dolphin lovers to space nerds and amateur divers, Hall and his team can put just about anything on a coffin – which has made saying goodbye easier for thousands of relatives and friends.

"The message behind it is: Let it be a celebration of life rather than the mourning of death," he tells dpa.

Hall's voice is soft, and he takes care to speak respectfully about the dead. He won't talk about some of his customers who had demanded absolute discretion.

Among the more extravagant requests were a coffin made of oversized Lego bricks, a yacht casket, a fire engine – and a cream-filled doughnut. A yacht coffin made by Hall's company.

"Before his death, this gentleman had specifically asked to be buried in a casket in the shape of a cream doughnut, as he had a real passion for them. He was a true connoisseur," says Hall.

Building the yacht was difficult, Hall explains, because the mast and keel had to be easily disassembled after the funeral service.

However, many New Zealanders prefer to be cremated, he says, which is why Dying Art also offers urns modelled after the cremated coffins.

In the case of the Lego coffin, for example, the urn was a simple red Lego brick.

Hall's main job is leading a design company called Big Ideas, which has helped with the design of Team New Zealand's boat for the America’s Cup.

Making personalised coffins is more of a personal passion and was born from the desire to help mourners say goodbye. "This is why we try to offer our caskets as cheap as possible," he explains.

And Hall's idea has met with wide appeal – as shown by the many emotional letters and pictures of the funeral service his customers have sent him. "I get the most amazing letters. People are writing how much easier the casket had made the day for them."

"It was a very beautiful casket and reflected this woman's life and personality perfectly," one customer is quoted as saying on the Dying Arts website. The Auckland company Dying Art makes unique, customised coffins to reflect the people who will later lie in them, be it a love of fire engines, a cream doughnut or Lego.

However, things didn't go smoothly in the beginning. Most funeral directors had looked puzzled when he first presented them with his idea of Dying Art.

"In the first year we only sold one or two caskets," Hall remembers.

But mourning culture in New Zealand has undergone a radical change over the past five years, he says.

"Now we sell around 150 to 200 pieces per year – and 50% are now specifically designed and not even from our existing range."

Flower patterns are extremely popular, Hall explains, particularly sunflowers and climbing roses. But customers can also choose from a wide range of animals, such as dogs, cats, butterflies, native birds or tigers, or from a selection of hobby-themed designs, like pianos, motorcycles and golf courses.

No matter how extravagant the choice,"so far we were able to complete everyone's dreams", Hall says.

The fire engine casket for a former superintendent of the fire department even had wheels so it could be wheeled to the funeral instead of being carried.

Dying Art has become a personal mission for Hall. "I love that I can help mourning people and do my little contribution," he says.

But the daily confrontation with death has also changed him personally. "Every day I wake up and try to make the absolute most of it," Hall says. "Life has become so precious, but also so fragile. When it's over, it's done." – dpa