Malaysian para athlete continues to serve the needy during the MCO

Tan Kok Ming may have cerebral palsy, but that has not deterred the 42-year-old para athlete from achieving his dreams in life.

“Three of my passions are charity work, volunteering and badminton, ” says the group brand marketing and communications assistant manager for corporate social responsibility and events at Sunway Group.

“My work includes liaising with NGOs and other parties to help the less fortunate, ” says Tan, who has been with the group for 13 years.

During the movement control order (MCO), he has been helping to identify NGOs to channel funds to, which go toward helping B40 communities whose livelihood or lives are at stake.

"No matter what the role, it's always an honour to be able to play a part in helping the less fortunate," Tan says.

His company has set up an avenue for them to support frontliners and B40 communities during the Covid-19 pandemic through the #Sunwayforgood fund, which Tan has personally donated to.

"While my team and I have distributed goods personally to B40 communities in the past, we are now distributing the items through essential services personnel during the MCO."

Like most people in Malaysia, Tan has been staying home and working remotely.

“Covid-19 and the MCO impacts everyone – whether regularly- or differently-abled – and we are all in this together. 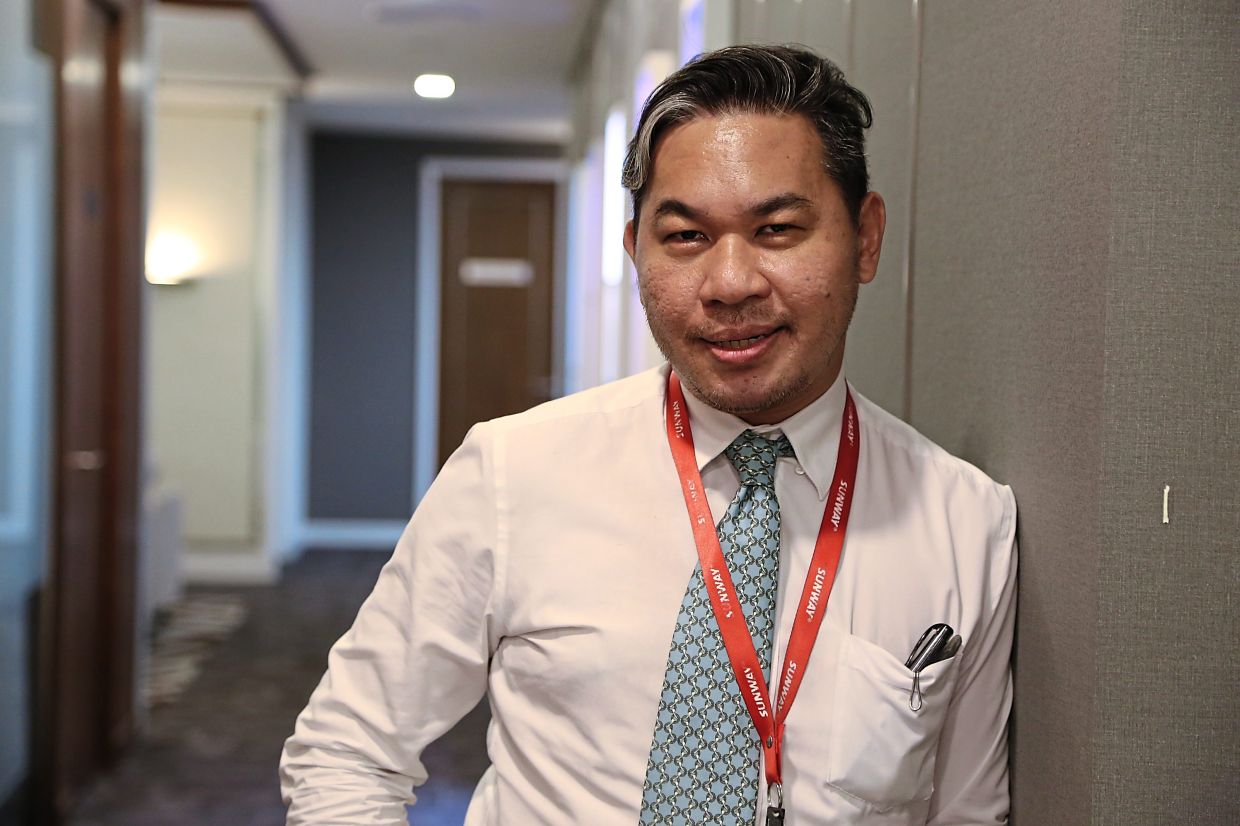 Tan believes that everyone can contribute to society, regardless of whether they are regularly- or differently-abled.

“The MCO has allowed me to spend more quality time with my family and children, ” says the Petaling Jaya-based father of two.

“We’ve been doing more things together – learning to cook, carrying out household chores and reading books, ” he says, adding that he and his wife also home tutor their kids.

But even though his daily life is no different from a regular working dad now, it was a struggle for him during his early years. His condition meant he has less strength and control on the left side of his body.

“From young, I realised other people could run and move smoothly, but I could only use one side of my body, ” he explains.

Having parents who believed in him and supported him helped.

“My parents taught me life skills from young because they wanted me to be independent when I grew up, ” he says.

They also sent him for acupuncture, which he describes as “extremely painful”.

Tan believes his parents' love and support contributed to who he is today. 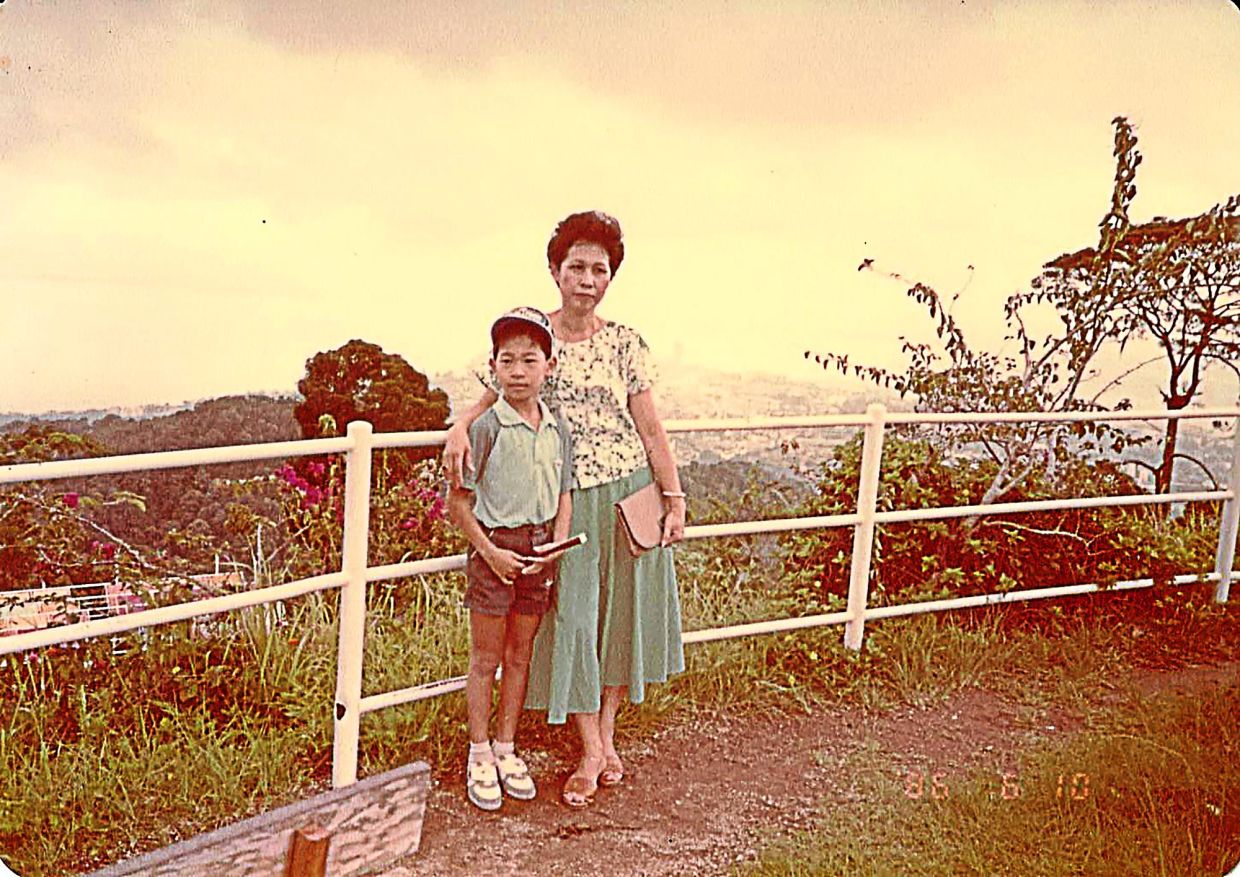 When he was young, Tan's mother sent him for many classes, including swimming, hoping that it would help improve his coordination and movement.

But he still needs to pace himself and take small breaks whenever he gets tired because of his condition.

“I may take more time with certain tasks but I’m definitely able to do what others can, ” he declares.

For things that most people take for granted, he has to carry out with greater effort.

“At work, I use my right hand to type on the computer keyboard, and I’ve trained my forefinger on the left hand to use the shift key, ” he cites as an example. “It may sound simple, but it took me years just to train my left hand.”

At times, he still has trouble turning thoughts in his mind into words.

“But I get by just fine. I pause between sentences and I’m able to get my message across when talking to people, ” he explains.

But Tan does more than just get by.

Seven years ago, the avid hiker successfully climbed Mount Kinabalu when he joined the company-organised event.

“I wanted to challenge myself and determined that if I could conquer the peak of Mount Kinabalu, then I can achieve much more in life too.”

He admits that it was not easy because of his condition, although his stamina and determination enabled him to withstand the low temperature, high altitude and physical exertion.

The climb took him three days and two nights to complete and he was with two colleagues who encouraged him along the way.

“Whenever I go trekking with my friends, I may often be the last one to finish the trail, but I’m satisfied to be able to complete it in the first place, ” he says. 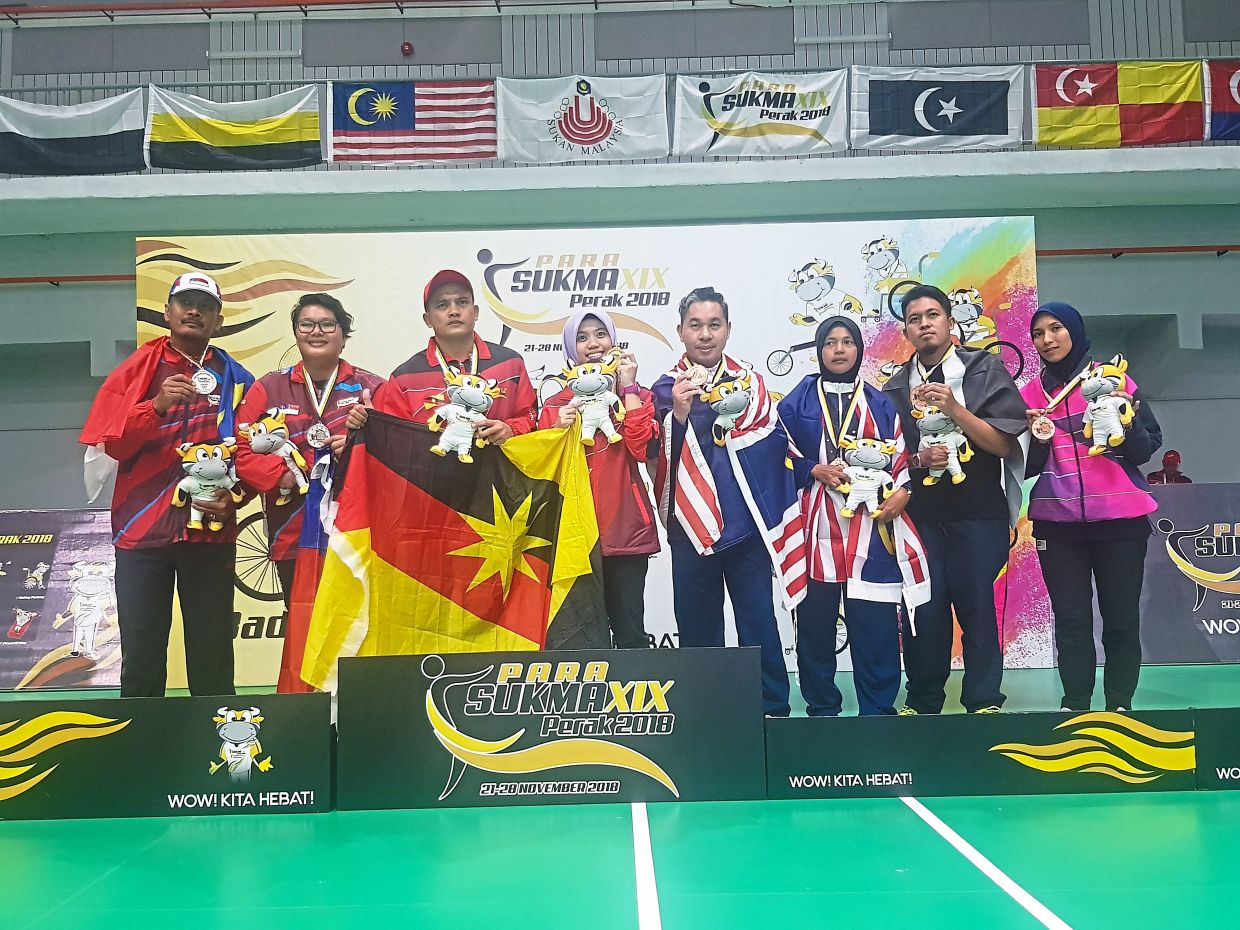 Tan (fifth from left) bagged the bronze medal in the Men’s Single and Mixed Doubles categories at Para Sukma 2018.

Tan’s interest in badminton started when he was nine.

“I played with my cousin and a neighbour at an open space near my house, ” he recounts.

At that time, he did not realise he was actually good at the sport.

It was only in secondary school when he started playing with others that he found his talent and joined the badminton club.

But he had to put in more effort compared to others.

“While others trained two days a week, I trained five, ” says Tan, who was the only differently-abled person in the team.

When Tan started working, he continued participating in tournaments.

At one of the tournaments, he met former Melaka state player Jeremy Ng who told him about the Para Games and encouraged him to pursue his dream.

Tan qualified as a para shuttler in 2018. His first match was in November that year and Tan was nervous because all the players were young (below 35) and he was the oldest at 41.

"When I made it to the Para Sukma Games, I was so excited. It was an experience of a lifetime, ” shares Tan, who also plays football and cycles using a custom-made four-wheel bicycle.

One of Tan's role models is Singaporean neuroscientist and Paralympian Dr William Tan. Despite being paralysed from the waist down and a stage four leukaemia survivor, he was the first person to complete a marathon at the North Pole by wheelchair, and has raised money for charity through such events.

“He’s a great inspiration and example of how anyone can contribute to society, regardless of differences in ability, ” Tan says.

“When opportunities are given to all equally, it motivates us to do good and we can contribute just as much, ” he concludes. 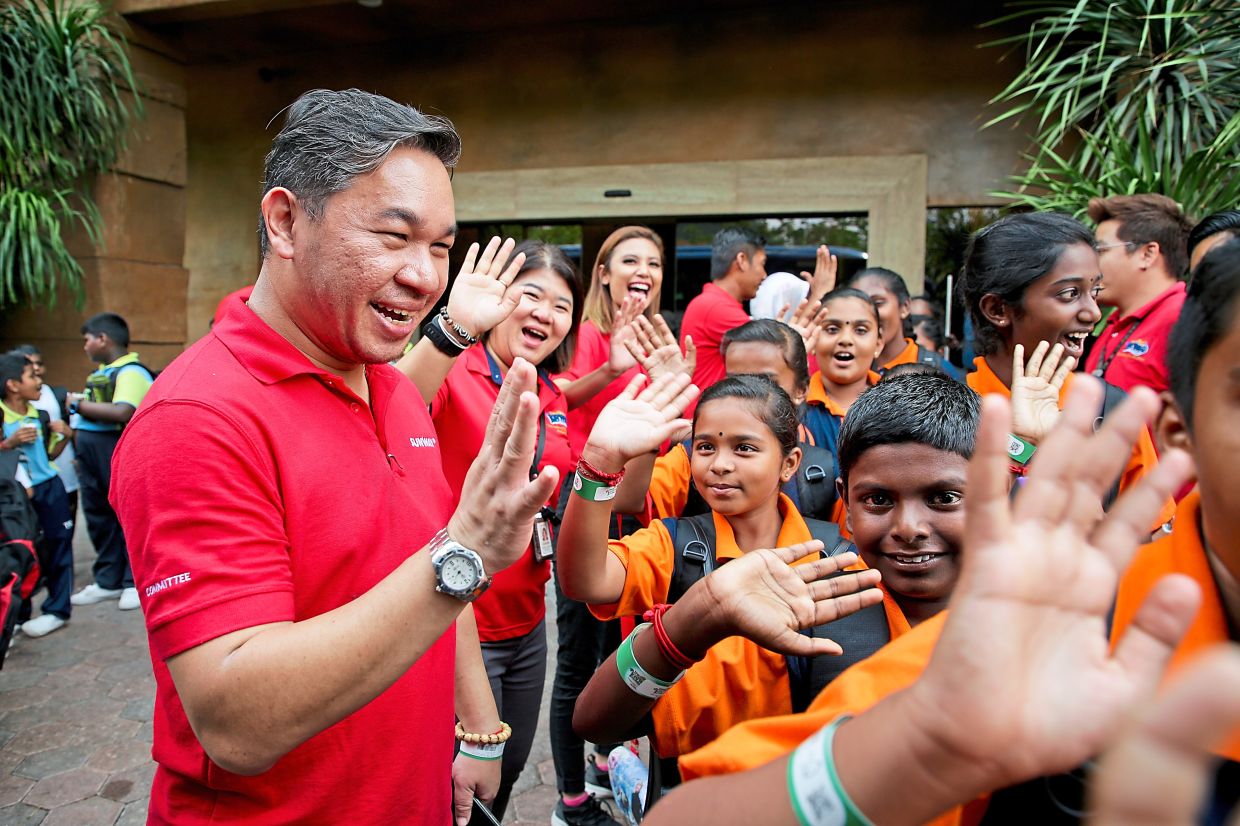 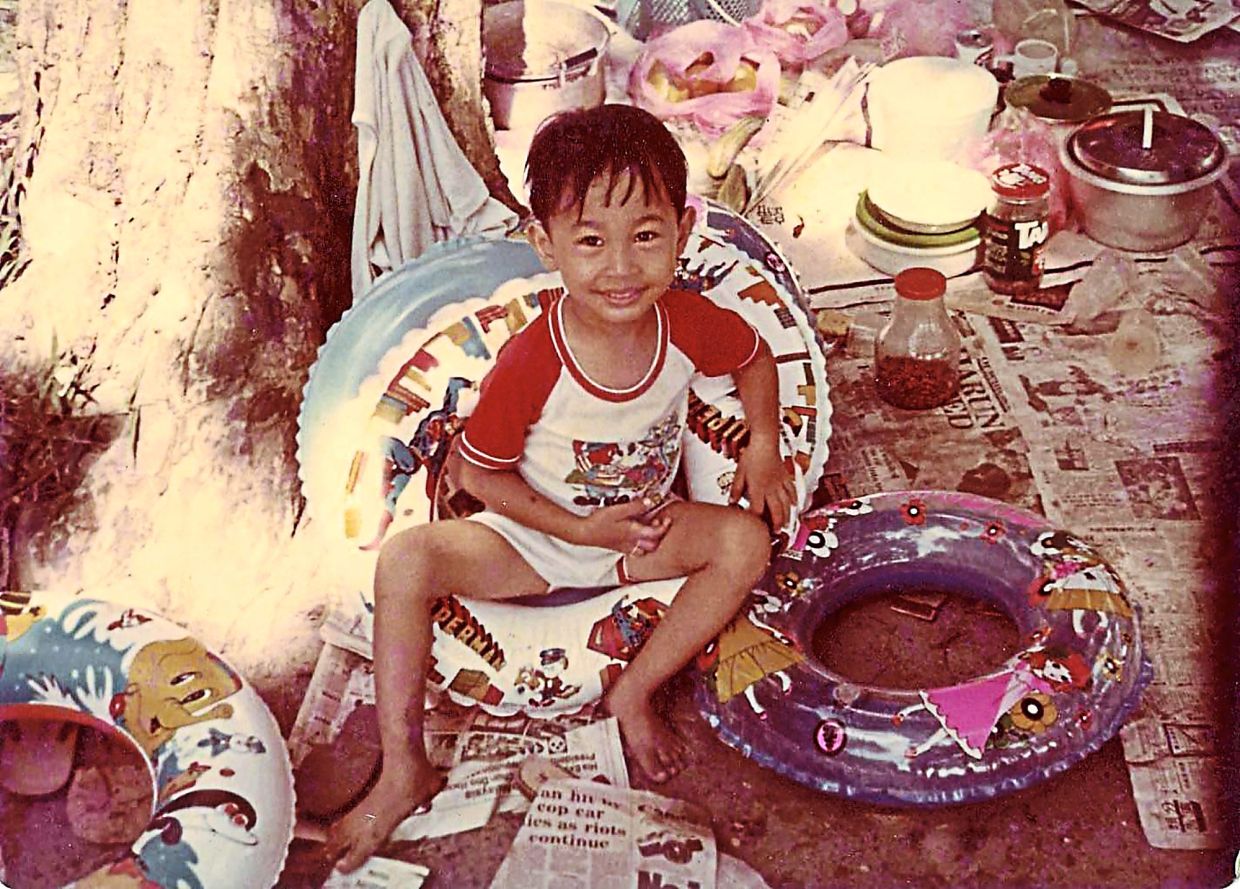 Tan (fifth from left) bagged the bronze medal in the Men’s Single and Mixed Doubles categories at Para Sukma 2018.

Growing up in Port Dickson, Negri Sembilan, Tan credits his independence to his upbringing.

As a child, Tan's mother sent him for many classes, including swimming, hoping that it would help improve his coordination and movement.

Tan won the bronze in the Men's Singles and Doubles at the Para Badminton Malaysia Sirkit 2 2019.

Tan believes that everyone can contribute to society, regardless of whether they are regularly- or differently-abled.