Families that make music together, stay together

Vernon and Rodney Steele have a riot performing together. The father-son team enjoy listening to the oldies. Photos: Art Chen/ The Star

UPDATE (14/3): The Musicians For Musicians Benefit Concert that was scheduled to be held on March 15 has been postponed indefinitely.

About 100-odd musicians will be involved in the concert, and they are more than a close-knit community... in fact, many of them are family. Here are the stories of some of these musical families.

Father and son Vernon and Rodney Steele perform in a band together. In fact, on Sunday, they will be singing and playing guitar for the 1970s Malaysian band Strollers, at the Musicians For Musicians Benefit Concert.

You’d think that performing with a family member is challenging but Vernon and Rodney Steele say that’s not the case at all.

“We have more of a friendship than father-son type relationship, ” Rodney, 39, says with a chuckle.

Vernon says that Rodney guides him and will be the first to play critic. “But we never hold any grudges or ill feelings towards each other. We’ve just always been that way.”

There was always music at home, both the La Salle Brickfields boys attest.

Vernon says: “My mum and my uncles would listen to the radiogram, and I guess the music just rubbed off on me first, then on him.”

Vernon and Rodney aren’t the only performers at the benefit concert who are related to each other.

Like the Osmonds, the BeeGees and Pointer Sisters, the 100-odd musicians are more than a close-knit community... many of them are family. 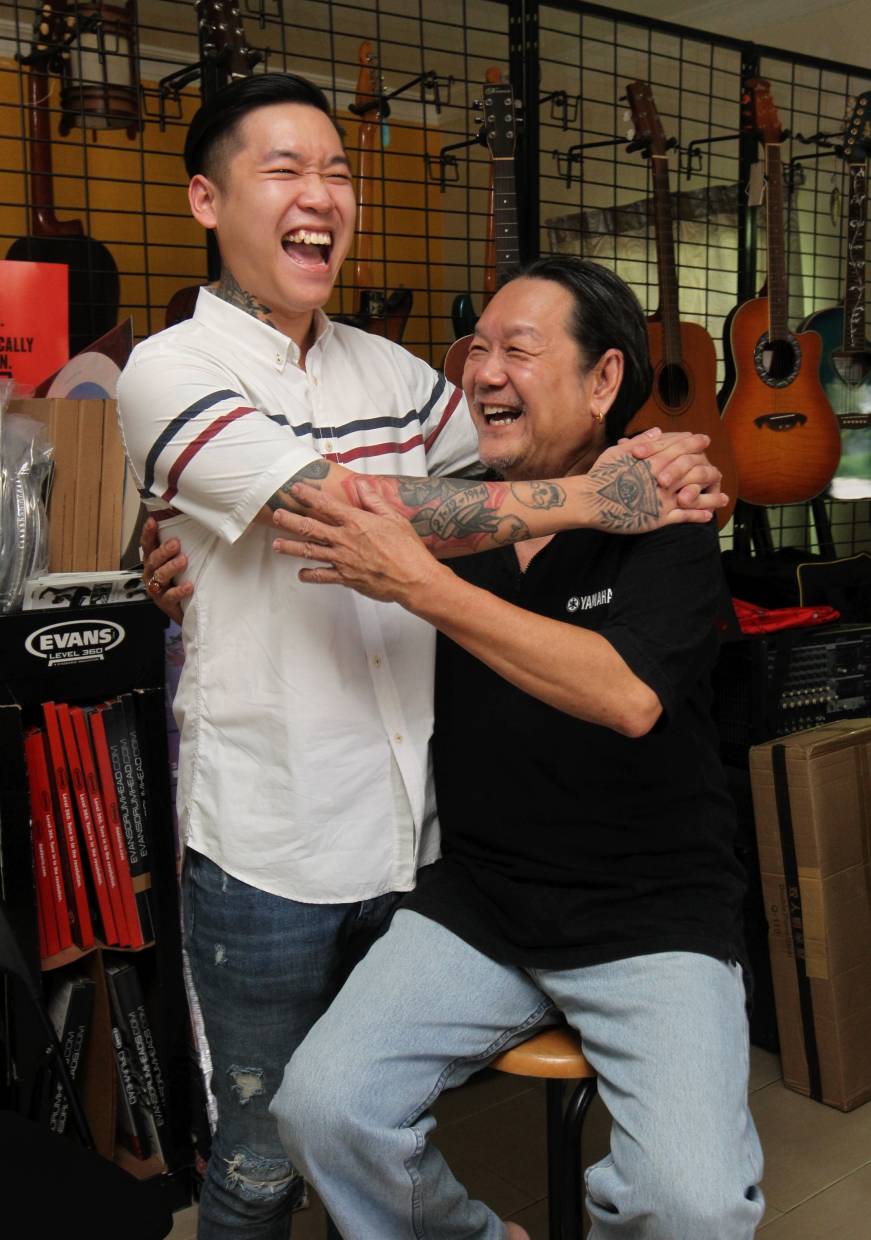 Father and son, Jimie and Ivan Loh, enjoy playing music together."My father used to take me to the Cellar, a popular club in Petaling Jaya in the early 1970s, to listen to the bands play, ” says Alleycats bassist Jimie Loh, 66. “Dad was a banker but he loved to sing. So we’d often go for the tea dances on Sunday afternoons and watch the bands together. The best thing was that they allowed young musicians to go up and jam, and I would always put up my hand, because I wanted to play!

Today, Jimie has passed on that love for music to his son Ivan. “It was just a natural progression, ” he says. “I always practised a lot at home and I used to work hard. Ivan is my only son, and he grew up among all of my friends, most of whom were musicians. So it was very easy for him to pick up the skills.”

Ivan shares: “Dad taught me how to play the guitar when I was about 15,16. But I also took drum classes at Music Mart and learnt formally from Gerard Singh.”

For the time being, Ivan is happy gaining experience whenever he can as a session guitarist, but remembers a highlight of getting to play with dad’s band Alleycats once.

“It was some time back, at a pub called Sparks in PJ. The guitarist didn’t turn up and so I stood in. It was pretty intense!”

Both father and son get along famously and are happy to be able to share a passion for music, although Jimie concedes to being his son’s biggest critic.

“I have to be the bad guy sometimes, that’s the only way to learn. During my time, we never had any guides or teachers, ” Jimie says.

Partners on and off stage

“When I first came to KL in the early 1990s to audition as a singer, my mother took a liking to Zack (a guitarist looking for a singer) immediately, ” singer Lyia Meta shares.

“He spoke to my mum and assured her that he didn’t want me to dress sexily or flaunt myself to the audience when we performed, which was unlike the other bands at the time who were more interested in hiring some eye candy to front their bands.

“I was still wet behind the ears at the time, so for my mum, that made her very happy. She said he looked like a nice boy.”

After a year of performing together, Zack Meta and Lyia got hitched, and their union both onstage and off has lasted close to three decades.

The couple have a son and a long history of music. Zack and Lyia have been partners on and off stage for two decades now and have a blast making sweet music together. Photo: Azlina Abdullah/The Star

Zack, who’s been in the live music business since the 1970s, admits that it hasn’t always been a walk in the park.

“It’s very tough to keep a marriage together in the music line ‑ some may say, almost impossible.

“But I had a lot of experience and could navigate the curveballs that came our way, ” he says, alluding to how audience members often hit on the frontwoman.

When asked what makes their marriage work, Lyia is quick to offer: “There is only one captain to this ship. Of course we argue, and I am quite a vocal person, I always say what I feel.

“Zack is very patient. He lets me say all I want to, but at the end of the day, he sets the bottom line.”

Zack adds: “Most days, we’re just too busy getting through the day, our lives are filled with music... you don’t really think about what makes the marriage work!”

Rusli Musif aka Olie from the band Heavy Machine says it’s a joy that he gets to perform with his youngest daughter, Kenanga Juwita.

The 66-year-old bandleader who takes turns on vocals, the sax and percussion, has been with Heavy Machine since the band started in 1995. At the time, it was just a four-piece that specialised in hard rock, performing covers from Deep Purple and Grand Funk Railroad.

“But later we added a three-piece horn section, ” Olie shares, “nobody else had that in the pub circuit at the time.” 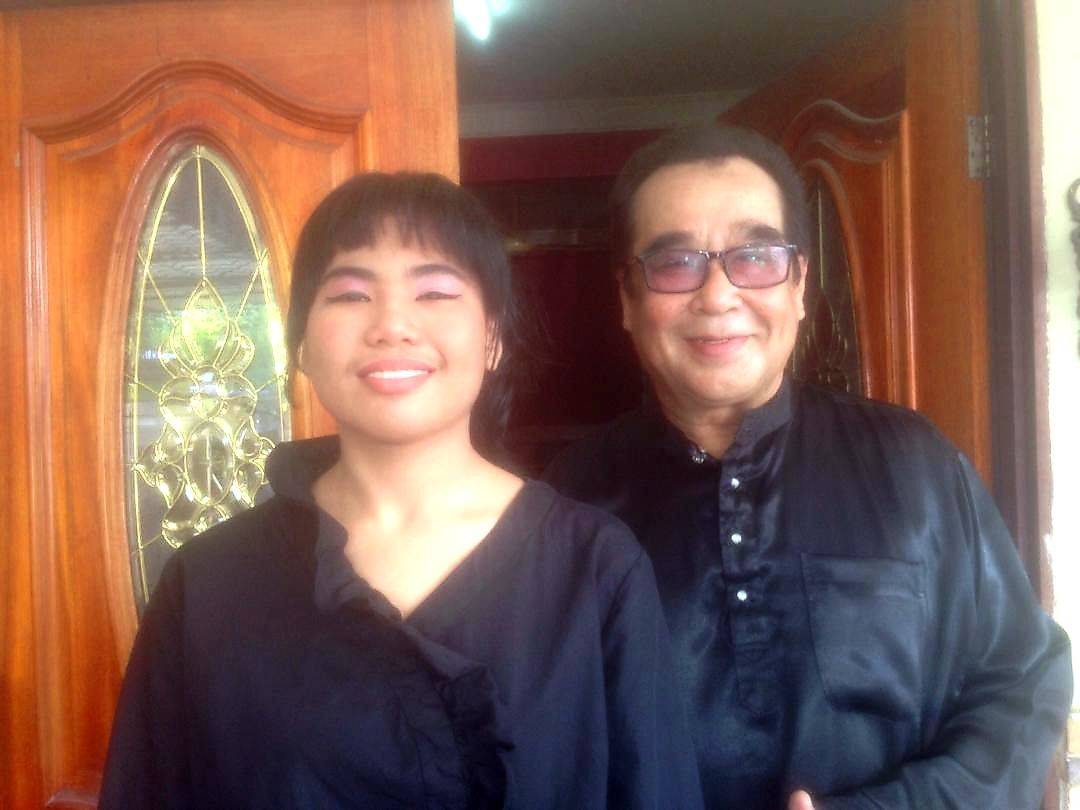 Rusli and Kenanga love performing together.

Kenanga, who is just 15, also plays the sax and can sing as well as play the piano.

“I remember watching my dad play and thinking to myself how nice it would be if I could play along with him, ” Kenanga said, adding that one day she just decided to pick up the sax. “Dad would teach me very patiently. He has always been very caring.”

“I guess it’s in her blood, ” says Olie, adding that education comes first.

“I am very clear about that. Kenanga can play with us and learn music, it may come in handy as a side income or she may teach someday, but school must always come first.”

Nonetheless he is proud to have her with the band, and considers it a unique feature. “Maybe someday she will take over with a new generation of Heavy Machine!”

When he was just a little boy of eight, Edwin Nathaniel would watch his big brother Charles play in a band called The Poor Boys in the late 1960s, and would pretend to play on the drums. When the drummer didn’t turn up for practice, one day, he filled in.

“At that time, his feet couldn’t even reach the bass drum pedal, and you’d have trouble seeing who the drummer was because he was so small, ” Charles, now retired and 70-something, reminisces fondly. “There was once, we were playing at a club, BB Park, where they had cabaret shows and striptease dancers, and we had to close his eyes because he was underaged!”

Charles said that he inadvertently became Edwin’s mentor, as the younger sibling would follow him everywhere, and was always very happy whenever he got the chance to play. Edwin, nine years younger than Charles, has been playing music for over four decades and today owns a music school, Music Mart in Petaling Jaya. He has dedicated a big portion of his time working with special needs children.

Edwin remembers: “Our father was very supportive and he used his savings to buy a full set of instruments for my brother and allowed him to have band practices at home. My father wanted us to be at home, rather than outside mixing with all the bad hats. And my mother was happy to cook for everyone. There were always a bunch of musicians in our house.”

Edwin adds: “I owe my involvement in the music industry to my brother. And now the greatest thing is that the both of us play in church and can thank God for giving us these talents.

The Voice UK contestant grew up in Sarawak; inspired by local music