Lefthanded, made up of Man Kidal (left) and Nash (right), will be staging a concert with Singaporean singer-songwriter Ramli Sarip (centre), who sang on the band's 1991 album Fanatisme. Photo: Offgrid Projects

For veteran Malaysian rock band Lefthanded, one of their most memorable shows was in Singapore.

Founder and guitarist Man Kidal remembers that 1985 gig clearly because it was held in a venue not usually associated with rock concerts - the old Police Academy off Thomson Road.

"I'll never forget that night," the 57-year-old, whose real name is Abdul Rahman Mahmood, says of performing in front of a 50,000 crowd at the Police And Friends rock concert. "We only played two songs, but we had so many fans who mobbed us, trying to touch us and take photos."

One of the region's longest-lasting Malay rock bands, Lefthanded – whose members also include singer Nash – will celebrate their 40th anniversary with a concert for their Singapore fans at the Capitol Theatre.

Man Kidal – the band is named after the way he plays guitar left-handed – says the gig is special to him.

"I've been going to the Capitol Theatre ever since I was a child," says the Johor-born musician. "It's always been my dream to perform there, I'm really excited. I was very happy when I found that the theatre went through a renovation a few years ago and now looks brand new."

The concert will feature a Singaporean singer who played a pivotal role in Lefthanded's formative years – veteran singersongwriter Ramli Sarip.

"Datuk Ramli is our mentor, our teacher, and this will be the first time we are staging a concert with him," says Man Kidal, who counts Ramli's old band, Sweet Charity, as one of their major influences.

Besides acting as a producer for their early albums, Ramli also had a stint as the band's singer on their 1991 album Fanatisme.

The band were formed in Johor in 1979 and Man Kidal says the early years were challenging to him as a musician.

"A lot of technological advancements that we take for granted today was not available to us back then, we had to rely on our wits and creativity if we wanted to get a certain sound from our instruments," he recalls.

"If we wanted to market our music, we had to rely on the newspapers, radio. These days, you just put your new music on the Internet."

As part of the tribute, Man Dayak's son, Mohammad Nur Hafiz, will be playing drums.

"I never thought that people would still be listening to our music after 40 years," says Man Kidal, who adds that the band plan to release new songs in the coming months.

"As long as we have our health, the energy and the ability to stay together, we will continue our journey with the band.

"If not, we will let the younger generation like Hafiz and the rest of our children continue the Lefthanded legacy." – The Straits Times/Asia News Network 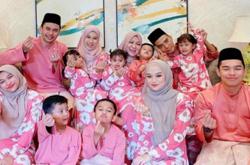