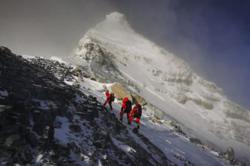 Richards speaking at The Cooler Earth Sustainability Summit held in Kuala Lumpur recently. Behind him is the selfie that he took after coming out alive from an avalanche. The image was featured on the cover of National Geographic. — CIMB Malaysia

Apparently, you can take a selfie and it can get you on the cover of National Geographic, extreme adventurer Cory Richards said with a straight face.

The audience before him broke out in a chorus of laughter.

He was joking of course, but his good humour belied a darker truth – the dire circumstances that led to his momentous selfie.

Richards, 38, was on an expedition to Gasherbrum II (the 13th highest mountain in the world) with two Italian mountain climbers in 2014 when they were caught in an avalanche and almost died.

Emerging from his near-death experience, the first thing he did was to take a selfie. Although not something he would recommend people to do, his action paid off.

The then National Geographic chief editor Chris Johns saw his image and offered him a job on the spot, knowing that this man would be brave, or foolhardy, enough to go where others dare not, just to get the job done. 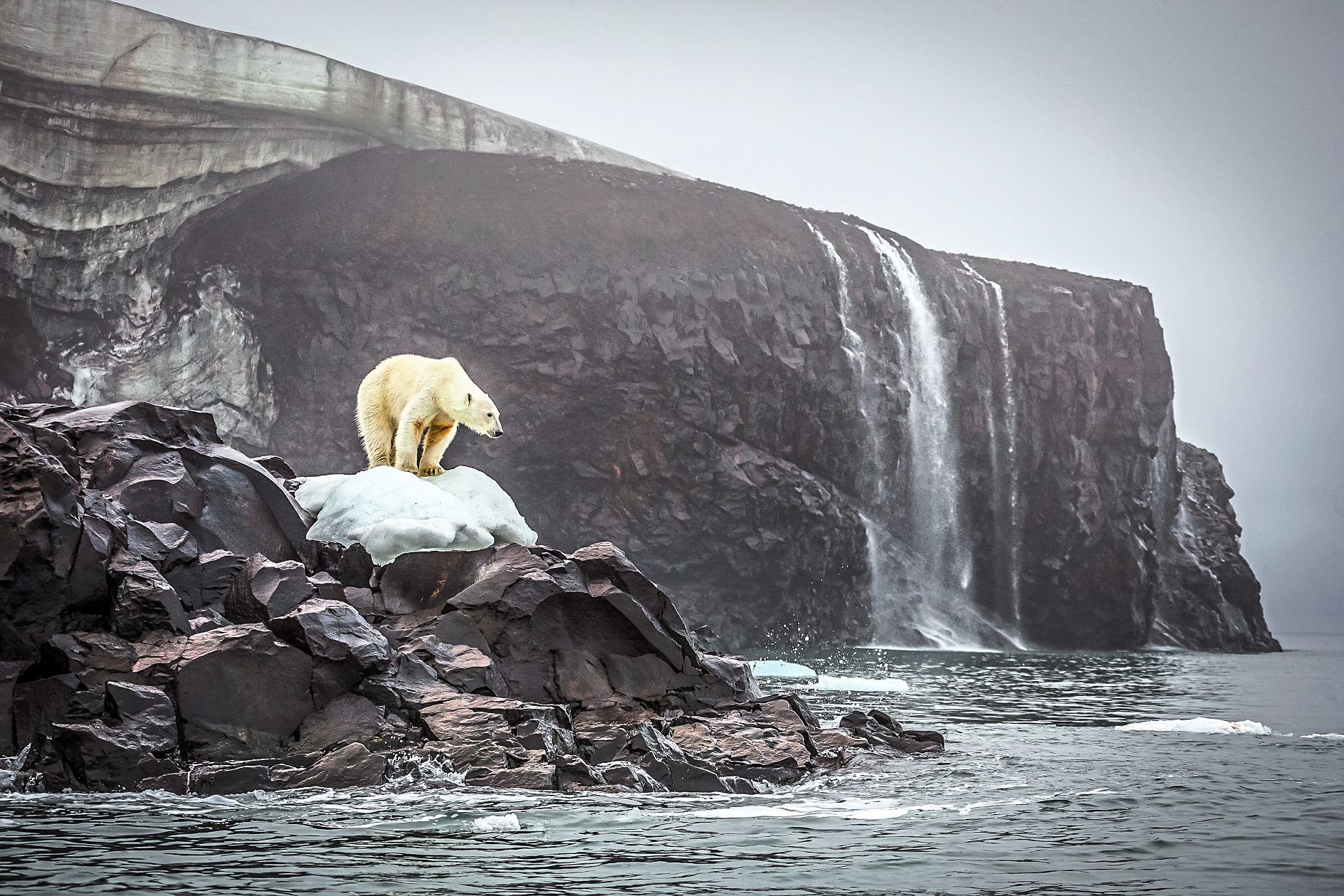 A lone polar bear searching for food in the waters of Franz Josef Land, a Russian archipelago in the Arctic Ocean. Photo: Cory Richards

Born in Salt Lake City, Utah, Richards grew up in Boulder, Colorado, and followed his outdoorsy parents on various adventures together with his older brother.

Growing up in two American states known for their vast expanse of desert and mountain ranges stirred in him a love for the open spaces and climbing.

However, he faced some issues mentally and emotionally.

Diagnosed with clinical depression at the age of 12, Richards also had a tumultuous and competitive relationship with his brother, resulting in him leaving school and running away from home when he was 14.

"I started pushing social boundaries and hanging out with older kids, getting into trouble. I was drinking and doing drugs and my life just fell apart," he revealed.

His parents sent him for rehabilitation but that did not work out. Climbing, says Richards, was a way for him to give voice to the angst, anxiety and frustration that he felt when he was young. — The Star/Art ChenRichards admitted that it was heartbreaking for his parents but it turned out well for him in the long run because being on his own gave him a wider perspective in life.

"It gave me a lens through which I could view a world that was different from a lot of people who stayed on the straight and narrow path," he said.

Richards returned to school when he was 16 and managed to graduate with a GED (equivalent of a high school diploma). He also turned to climbing as a way to resolve his inner turmoil.

"I found in climbing a way to give voice to that angst, anxiety and frustration that I had as a disgruntled, privileged young man. It was a way for me to get that energy out and a way to tell my story," he said, emotions obvious in his voice.

"When you climb, it's like going out and literally doing battle against something that seems impossible. And you can literally die from it because of the dangers involved," he said.

To Richards, climbing mirrored the human capacity to overcome.

"We are an incredible species on that level - look at how far we've come from where we started. I've always been fascinated by the human ability and need to create, consume, have more, build and explore. And climbing was my pathway to tell that story allegorically," he said.

Richards didn't expect to become a photographer, admitting that when he first started out, his photos were not really up to the mark.

"Growing up, I was an artistic and creative kid who was always drawing something, so I thought I would be an illustrator when I grew up," he said.

"Then, when I was 17, I found my mum's old point-and-shoot camera and decided to follow in the footsteps of a ski photographer friend. I was 18 when I went on my first big expedition and my pictures were terrible!" he laughed.

Although he is mainly self-taught, he has had some "formal" training in photography.

"I love learning and I can be a great student and get straight As. But classroom learning has never sat well with me," he admitted.

"There is formal training and there is learning as an apprentice or assistant. I was trying to apply (the latter) to the type of photography that I wanted to do at that time, which was mountain photography," he explained.

Richards has also been a team athlete and ambassador for a few outdoor brands, and did a stint in fashion photography too.

But he cautions that it is not all glamour and glory, and a successful career does not always mean a successful personal life. 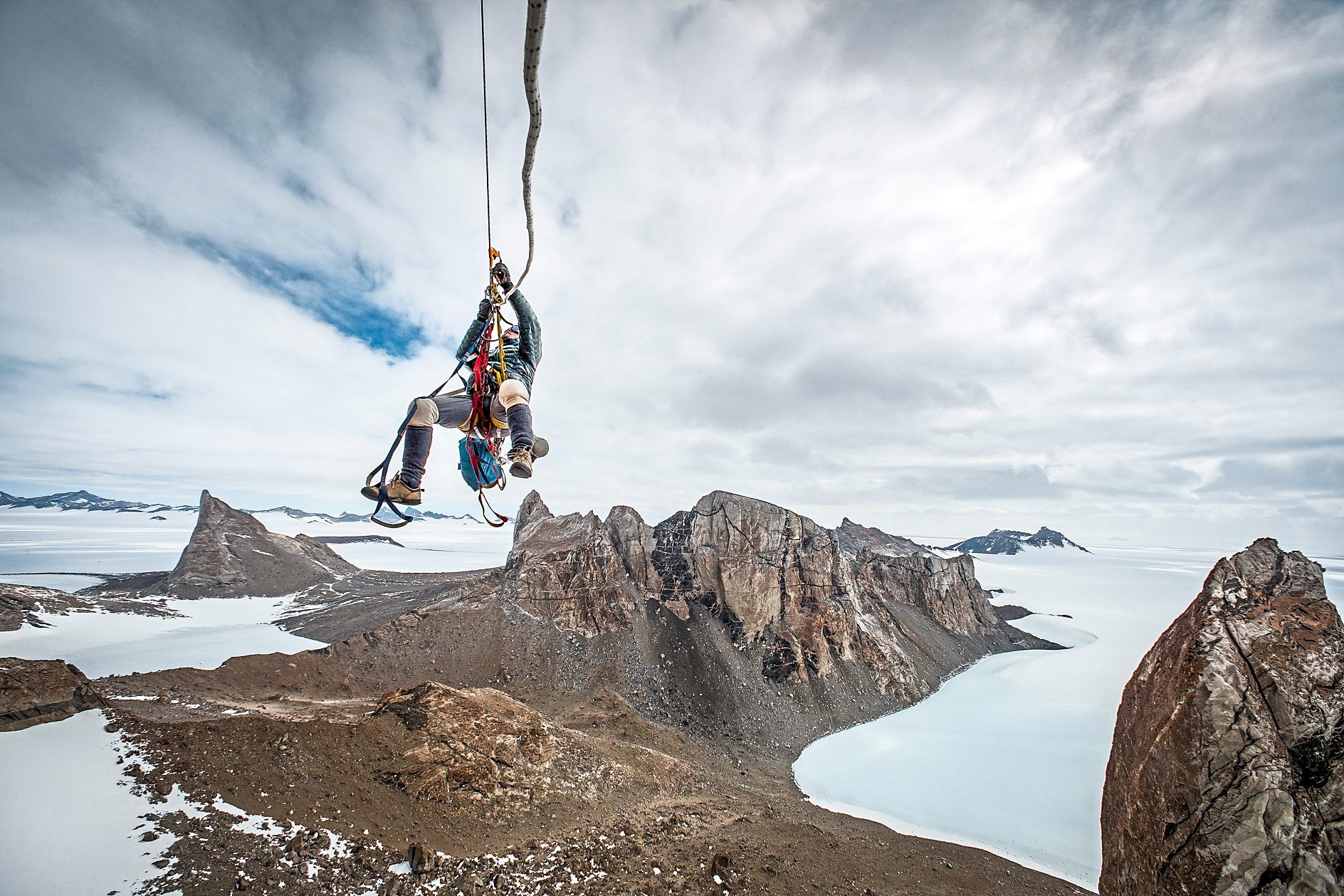 A climber ascending a fixed rope on a first ascent of Bertha’s Tower in Antarctica. Photo: Cory Richards

"My career had exploded in a great way and I had become successful for someone at my young age. I was said to be a rising star for National Geographic and that does incredible things for one's ego. But this is something that we must be careful of," he said, his face growing serious.

Richards revealed that he suffered from post-traumatic stress disorder triggered by his near-death experience on Gasherbrum II. He turned to drinking and buried himself in his work.

Newly married at that time, all that took a toll on his relationship – he lost his marriage, his friends and also left the production company that he had started with his two best friends.

Once again, he turned to the mountains for solace.

"I was in a dark place and going back to the mountains was a way for me to try and resolve those issues. I decided to climb Mount Everest – without oxygen," he said.

When asked why "without oxygen", he replied,"There is something 'pure' when, rather than bringing the mountain down to my level, I wanted to rise to the level of the mountain."

A perfectionist by nature, Richards shared that he expected a "phoenix-rising" sort of experience but that was not the case.

"It was just like using a band-aid. I came to realise that ironically, being a good person has nothing to do with accomplishing great things. Although good people can do great things, they are not necessarily synonymous.

"A person may be a billionaire, own a multi-billion dollar company, climb Mount Everest without oxygen, or do other great things, but if he or she is a sh*tty person in their personal life, all the other stuff is meaningless and superficial. The only real foundation in our lives is the person we are inside," he emphasised.

Rising to the challenge

To date, Richards shared that his most difficult assignment was on the topic of "Happiness" in Singapore about four years ago.

"It was not easy trying to dissect a psychological concept and give voice to it in a visual narrative. I was also going through a lot of personal issues at that time," he shared.

Surprisingly, he said that his most physically challenging assignment was not climbing any mountain but a four-month expedition in Africa.

"Even though climbing Mount Everest without oxygen was difficult, each assignment has its own set of complications.

"In Africa, we were on the river every day. The heat was sweltering and we had to drag our boats through waist-high razor grass every day. It was so difficult just to make one kilometre of progress," he explained. 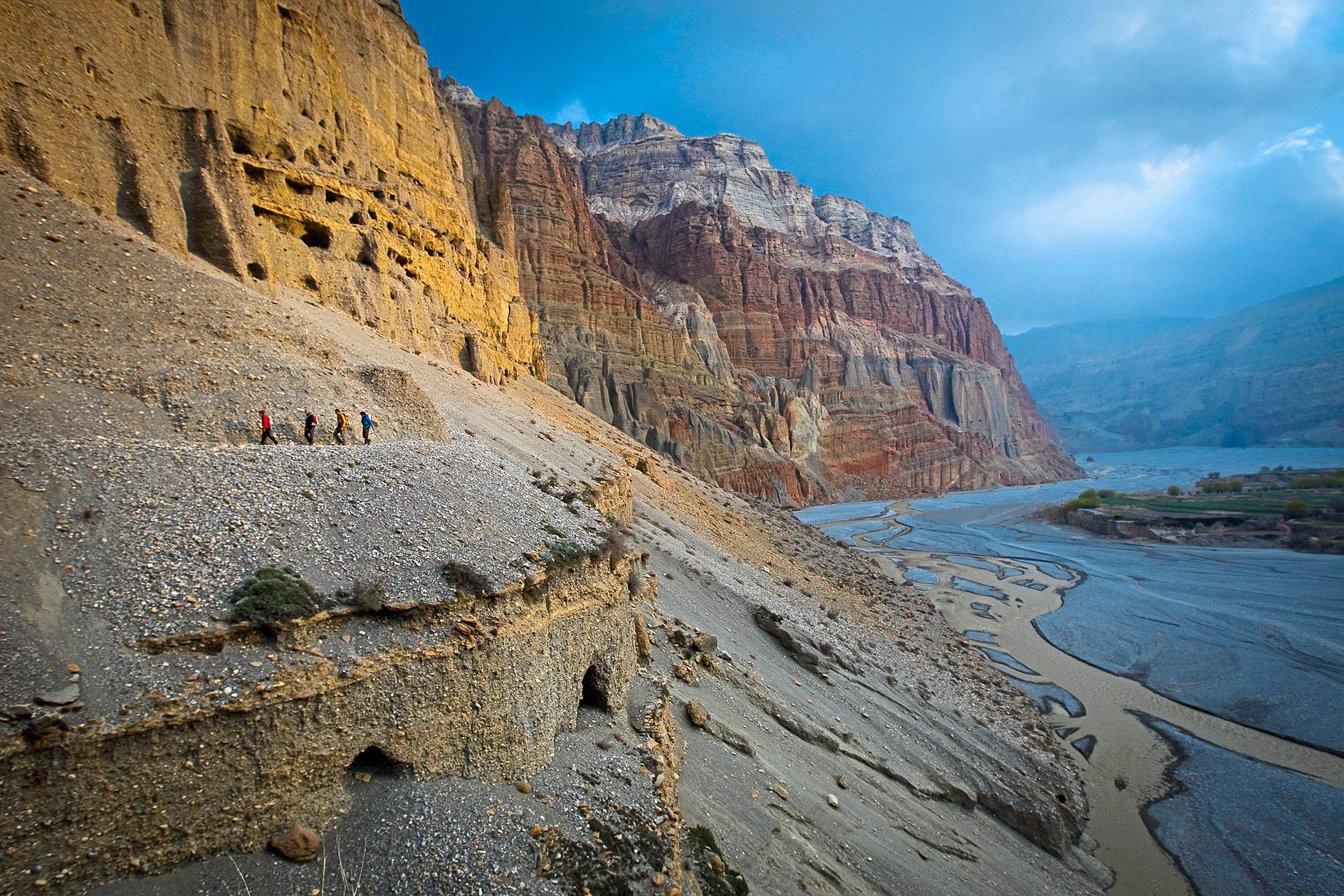 On a positive note, Richards' most memorable expedition was in Mustang, Nepal, where he recently returned to for his latest assignment.

"It is a landscape of discovery and mystery. In every way, I find it igniting, curious and shockingly beautiful. Every time I go there (this is his third time), I'm moved by the sense of impermanence, belonging and our innate capacity to carve a way of living from the most unlikely of environments. I love it there – the texture, smell and taste of it," he enthused.

Through his work at National Geographic, Richards hopes to make a positive impact in the world.

"It is my job as a visual storyteller to bridge the gap, provide the visual cues to show people and make them understand why it is important to care about social causes and environmental issues such as climate change, and to do something about it," he said. 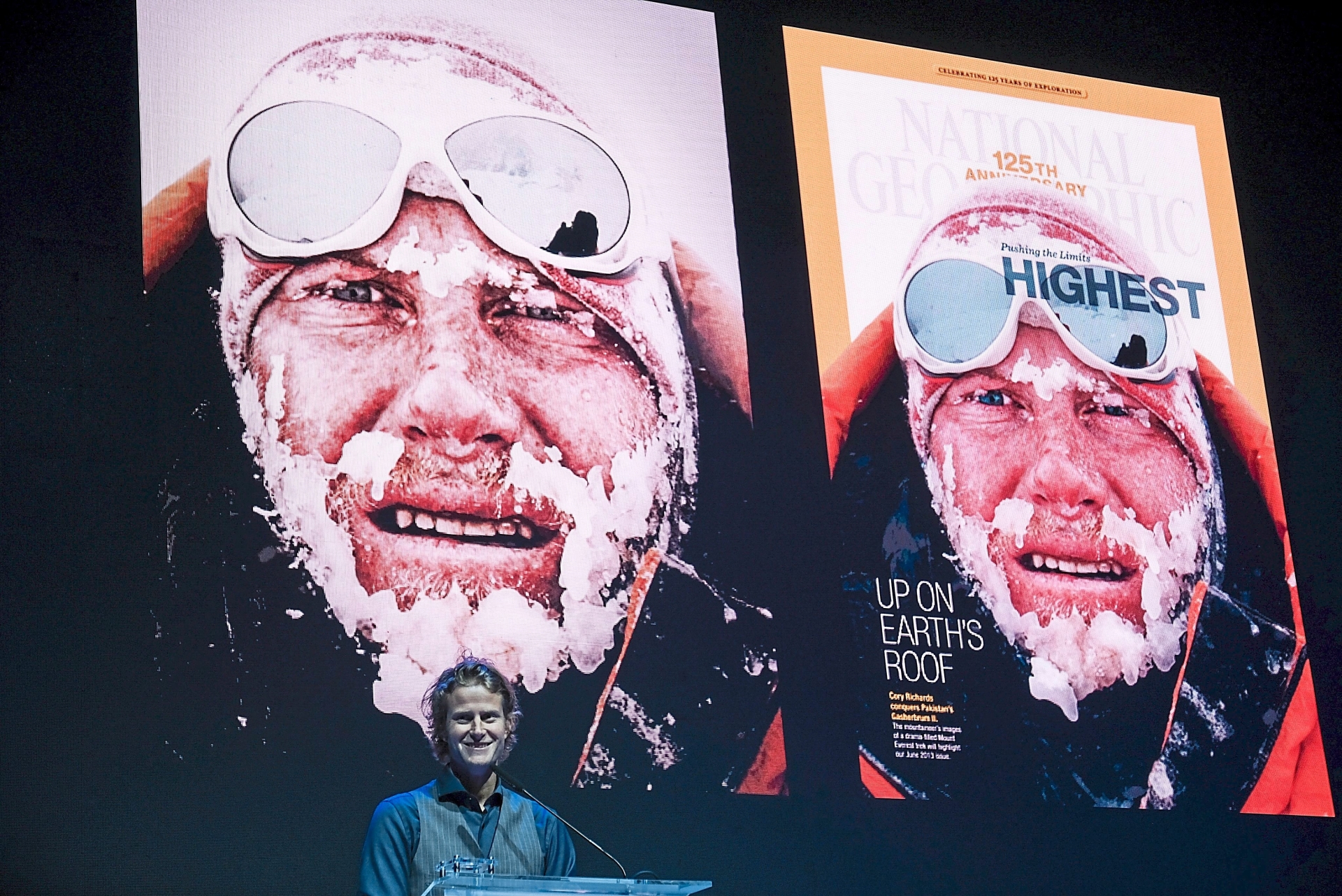 Richards speaking at The Cooler Earth Sustainability Summit held in Kuala Lumpur recently. Behind him is the selfie that he took after coming out alive from an avalanche. The image was featured on the cover of National Geographic. — CIMB Malaysia

A lone polar bear searching for food in the waters of Franz Josef Land, a Russian archipelago in the Arctic Ocean. — Cory Richards

Climbing, says Richards, was a way for him to give voice to the angst, anxiety and frustration that he felt when he was young. — The Star/Art Chen

A climber ascending a fixed rope on a first ascent of Bertha’s Tower in Antarctica. — Cory Richards

The 16th century Stakna Gompa Buddhist monastery against the backdrop of the Himalayas in Ladakh, India. — Cory Richards