Super Ram: How a failed law student became a millionaire Nobody is a failure in life so long as you try and try. This mantra has served Datuk Ram Nandkishore very well.

It was Datuk Ram Nandkishore’s dream to be a barrister. So after his Senior Cambridge examination, he flew off to London in 1964. But he never made it to the Bar. It came to a point where he threw up his arms and decided to move on.

“I didn’t complete my Bar finals. I failed my Bar finals four times, but Tunku (Abdul Rahman, Malaysia’s first prime minister) failed it many times. So I took inspiration from him,” said Ram. “You can still be successful despite not been called to the Bar. I felt very qualified as a failure because I had read the same subject many times.

“You can say, I’m a successful failure,” said Ram, who is based in London. Ram and his French wife, Sabine Ram, made a recent stopover in Malaysia while on a five-week holiday.

Ram ventured into real estate in London. In 1970, he built a retail chain which he later sold off when he moved on to food and drinks, restaurants and clubs.

Prior to his venture into real estate, Ram was practically out in the cold when his parents cut off his allowance after he kept failing his law exams. “I was angry and frustrated,” he confessed.

Ram found moral support from his then French girlfriend, who later became his wife. Sabine was studying in London then.

He said: “I was not coming back to Malaysia to take over my father’s tea plantation business (in Cameron Highlands) or to marry an Indian girl chosen by my parents.”

Ram had displayed a strong entrepreneurial streak from young. He became a market trader in trinkets and costume jewellery.

Life was very hard, but Ram had remarkable business acumen. Within a year, he had expanded to 10 stalls. Ram bought his first shop, Rama Superstore or Super Rama, a few years later. At one point, Ram had 350 traders paying him rent. From the profits, Ram ventured into real estate. “It didn’t quite work for me because it was a very international scene and I didn’t have a club background. It was on a roof garden in Kensington,” he said of his “losing money” venture.

In 1980, Ram sold it to (now Sir) Richard Branson who still owns it. It is now called the Roof Gardens.

“I sold it to him at a great loss. Like the lucky man that he is, he always makes money,” Ram reminisced. “I also sold him four of my shops. I know him reasonably well but I can’t claim he’s a buddy of mine because he’s an international figure.”

At 69, Ram is a sprightly man. The boom in his voice belies his age. Perhaps it speaks of his verve, health and vitality.

Ram, who was impeccably dressed, cut a distinguished figure as he emerged from his suite in Majestic Hotel where he stayed for a night in Kuala Lumpur. Prior to this, Ram and his wife were in Cameron Highlands, where they enjoyed “steamboat in the cold weather, strawberries and durians”.

“My wife and I have been back in Malaysia over 20 times. We love the local fruits and food. In Cameron Highlands, my uncle’s family runs Bharat tea plantation, the second largest after Boh tea plantation,” said Ram, who clarifies that he no longer has any financial interest in the tea business.

For one who grew up drinking tea, Ram was strangely not finicky about his choice of tea. “Anything you like,” he told the waiter after I, too, did not opt for any preferred tea. Coming from a tea family, Ram thinks Cameron tea is “the best in the world”.

“Malaysia has very good quality tea and a small quantity competes on the world stage,” he added. “Cameron Highlands is a small place, but it’s a joy to see it competing internationally with its vegetables, fruits and flowers.”

Ram was in Kuala Lumpur to attend a school reunion with teachers and classmates from his hometown of Tapah, whom he has not seen for 50 years.

Ram keeps two homes, one in London and the other in Marbella, a hub for European tourists in southern Spain, two hours’ flight from London. He spends more time in Marbella where he has a chain of restaurants, and returns to London once a month.

“You have sun (in Marbella) 320 days a year. It’s a paradise for Northern Europeans who want to escape from a miserable winter,” Ram said.

His only son, Sunil Ram, 35, is CEO of Metrogrupo and helps him run a dozen restaurants and clubs in southern Spain, including two Indian, four Italian and four American restaurants. Ram is the chairman of Metrogrupo.

On March 10, Ram celebrated his 70th birthday with a party at the swanky Roof Gardens in London. “I had a wonderful birthday celebration. The function was at my former club, Regine’s, and it brought back lots of memories. It’s like coming a full circle,” said Ram.

Looking back, Ram can humbly attribute his success to his great resolve.

“You can make a start in life. I started with no money at all and now I earn millions,” he said. “Nobody is a failure in life so long as you try and try." 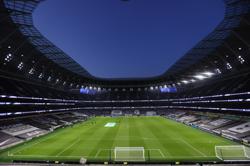