It is summer here, a traditional time for barbeques and eating outdoors in Europe. It is also a time of reading outdoors under the shade of lush green trees, a habit I enjoy immensely, especially with a glass of wine and my dog snuffling in the grass nearby. And often, I like to take some time in the outdoors to reflect on the inconsistent information the world is often fed.

As an example, we are continuously told to recycle plastics, and of course this can only be a “good thing” to do. But this messaging does not tie up with the facts, which is why it is slowly dawning on people the concept of recycling plastics may be mostly an illusion.

Research by the OECD found that only 9% of all plastics are recycled globally. So why is there such a proliferation of “recycling” symbols on consumer plastics, such as that used for food packaging?

Mainly, the use of packaging symbols is a sophisticated and cynical tactic to get people to consume MORE plastics, by reducing the guilt associated with plastic pollution. If recycling really works, then plastics production would be flat or falling – instead it is expected to increase to 600 million tonnes per annum by 2025, up from 368 million tonnes a year in 2019, a staggering 63% projected increase in just a few years. These stats exclude synthetic fibres, by the way, so the real annual production of plastic-based products is significantly higher.

We should of course still try to recycle plastics, as it is better than nothing, but the impact is very much less than you think, compared to reuse and avoidance of plastics altogether. So, the more honest message would be informing people the scale of the problem caused by plastics. Basically, we are told to recycle because otherwise the world would have an additional 9% of an ever-increasing supply of plastics injected into our environment every year. Research shows that only 9% of all plastics are recycled. — KRIZJOHN ROSALES/Pexels

To put this into historical perspective, we have discarded over 6.3 billion tonnes of plastic since its use was started in the 1950s, out of which only 600 million tonnes has been recycled, and of the remainder, 4.9 billion tonnes have been sent to landfill or usually, left in the natural environment to pollute the land, air, and seas. It is only a matter of time before discarded plastics in the seas outweigh all the marine life in the oceans.

The other seldom-mentioned fact is that recycled plastics are poor quality products which always require MORE new plastics to be added before they can be recycled into, for example, a new bottle. In any case, most plastics cannot be recycled more than once, and of those which can be recycled more than once, they cannot be reprocessed more than three times. The reason is that the hydrocarbon-based plastic polymer chains are broken down by heat during reprocessing, seriously degrading their tensile strength and structure. Hence, the recycling profile of plastic is therefore far inferior to items such as glass and aluminium cans.

There are several innovative ways proposed to mitigate the disaster of so many millions of tonnes of plastics entering the environment every year, such as taxes on the use of plastics, chemical recycling, and adapting bacteria to “eat” plastics. Of all the suggestions offered to date, governments around the world have mostly opted to tax some forms of plastic usage, such as supermarket shopping bags. But it is still worthwhile exploring the other options proposed.

The most versatile version of chemical recycling is called thermal conversion, which breaks down plastic polymers into simpler molecules by the application of intense heat via a process called pyrolysis conducted in an oxygen-free environment. Cooling and condensing the gases resulting from the pyrolysis of plastics results in an oil-like liquid which be fractionated (divided) into several raw products which may be used as fuels or to make new virgin plastics. 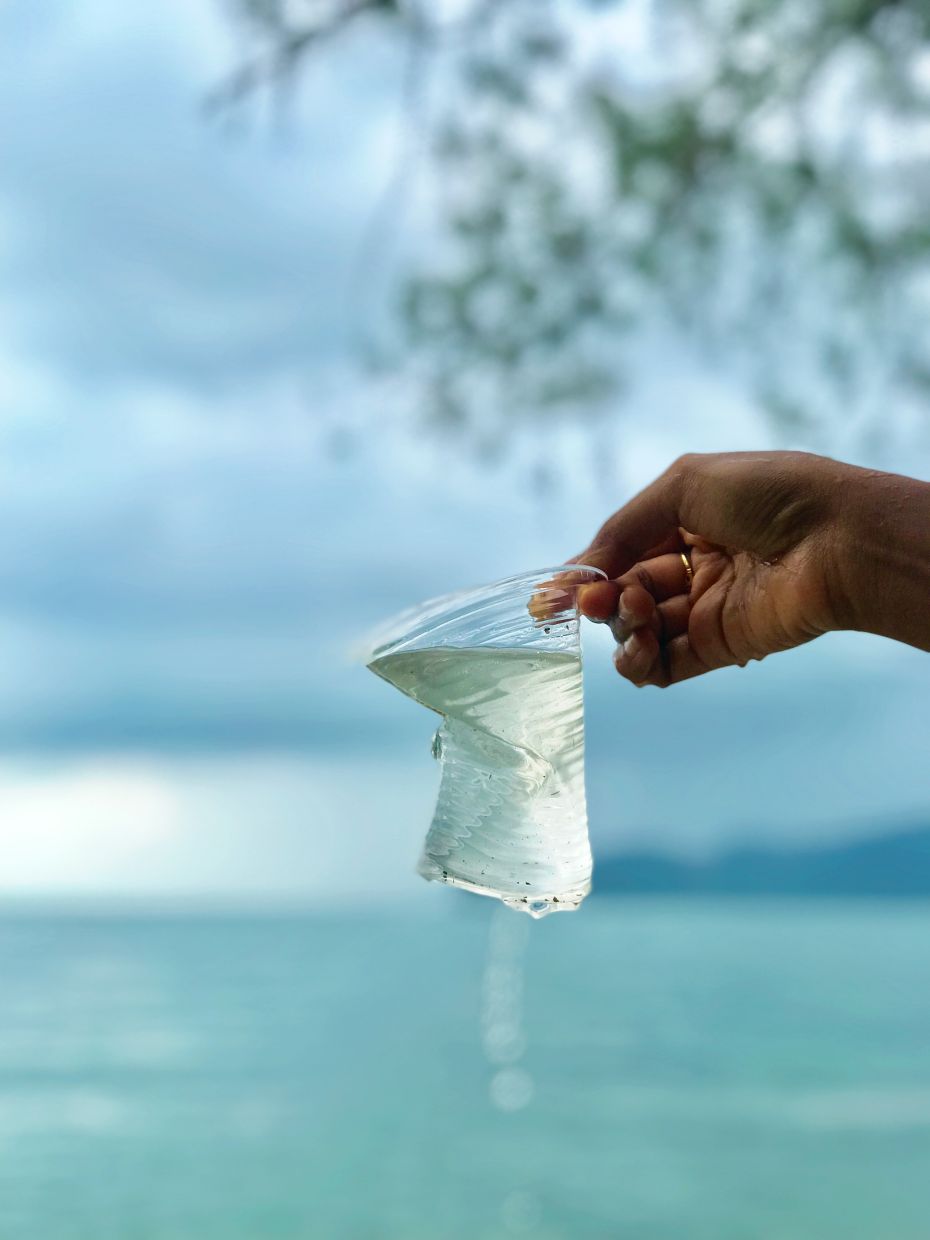 Billions of tonnes of plastic are sent to landfills. — CATHERINE SHEILA/Pexels

Another form of chemical recycling uses a hydrothermal technique which injects superheated water through columns of plastic wastes held in tanks under high pressures. The extreme heat converts the plastics to gases which are released when the water is removed. These gases are then cooled and fractionated into naptha, distallate gas oil, heavy gas oil and a heavy wax residue. All these compounds are usable by heavy industries.

Apart from the immense energy requirements, chemical recycling have some other limitations, identified during studies into the processes. Other issues include significant environmental pollution, and a susceptibility to technical failures.

There are several research laboratories around the world looking at biological solutions for plastic pollution. The most promising candidate appears to be a bacteria known as Ideonella sakaiensis 201-F6 which is capable of digesting plastics made from polyethylene terephthalate or PET. This bacterium was discovered in 2016 by a biologist Kohei Oda, at the Institute of Technology in Kyoto.

In a remarkable example of evolution, the Ideonella sakaiensis bacteria had developed the ability to produce enzymes called PETase (or hydrolysing PET) which can digest the entirely man-made material, PET. These enzymes reduce the long polymers in PET into monomers called terephthalic acid and ethylene glycol and the further breaking down of these monomers provides the energy needed for survival of the bacteria.

However, it is unlikely that the current strain of the bacteria will solve the world’s plastic pollution problem. For one, the environmental survival requirements are stringent for the bacterium. Another limitation is it digests PET very slowly and may take up to 60 weeks to digest a tiny, thin piece of the plastic, even under optimal conditions. And there are six other major types of plastics which the bacteria do not handle.

Nevertheless, biologists are now experimenting with genetically modifying Ideonella sakaiensis to also produce another plastic-digestion enzyme called MHETase, which makes the bacteria digest PET around six times faster. But there is still a long way to go: firstly, improving the ability of the bacterium to digest PET, then altering the bacterium so that it can survive in various environments, and finally to ensure that it does not become an invasive biological hazard itself.

Curiously, Ideonella sakaiensis might one day help to solve the world’s seemingly insatiable demand for vanilla-flavoured foods. As mentioned, one result of PETase acting on PET is a resulting monomer called terephthalic acid which has a chemical structure closely related to vanillin.

Scientists has discovered that adding genetically engineered E. coli bacteria at a temperature of 37C to terephthalic acid can convert the monomer into vanillin, the same food flavouring compound extracted from vanilla pods. So, it is feasible that in the future, people may be enjoying ice creams and desserts flavoured by the bacterial by-products of digested plastic. Around 50% of the world's biodegradable plastics are starch-based blends, made from corn, sugar cane or cassava. — KINDEL MEDIA/Pexels

Another plant-based biodegradable plastic is polylactic acid or PLA, made from fermented plant starches from corn, cassava, sugarcane, or sugar beet pulp. PLA materials tend to suffer from several structural and strength limitations which precludes their use in several stress-bearing areas. PLAs have around 25% of the world’s market for biodegradable plastics.

Although the above two types of plastics are often termed as biodegradable or compostable, they normally require special equipment to fully decompose them. Left untreated, they can take several years to break down fully.

Over the last decade, some new materials have been invented such as polyhydroxyalkanoates (PHAs) which are biopolymers produced by bacteria. These biopolymers exhibit some of the characteristics of plastics made from crude oil but are fully biodegradable without special equipment.

Although these PHA bioplastics are desirable, and feature many properties of real plastics, they cost significantly more than plastics made from crude oil. PHAs have around 5% of the biodegradable plastics market globally.

Curious Cook: Time for a change in diet