Curious Cook: Time for a change in diet

After suffering a knee injury in December last year, I decided finally to see an orthopaedic surgeon about the persistent pain in the right knee. The outcome was a mix of good and bad news. The bad news is that I require an infiltration treatment of corticosteroids injected into my knee. The further bad news is that this is very probably not a permanent cure.

However, the good news is that losing a further 5 kilos or more of body weight can increase the chances of long-lasting relief from pain by 50% or more, thus possibly avoiding any further treatments.

Over the years, I am now some 13 kilos lighter than my heaviest ever weight but am still some 5-6 kilos heavier than the optimal weight for my height and age. I had planned to slowly reduce weight over time, but the reality is that, over the years, I just fluctuate between losing a kilo or two and gaining it back quite quickly, very probably due to a severe fondness for good food and wines.

Anyway, it is time to recap the techniques that had worked in the past, and maybe reintroduce them along with some new ideas that should work. And as such, this may be useful for other people in similar situations. The 16:8 diet only allows for eating within an eight-hour period. After that, only water is allowed. — SANDRA SEITAMAA/Unsplash

One approach that worked for a while was having a simple, limited time window for eating food daily. This is commonly known as the 16:8 diet, where all the eating is done within an eight-hour window, and nothing (except water) is allowed for the rest of the day. This was an easy regime for me to follow as I just skipped either breakfast or dinner, mostly breakfast.

The interesting thing about the 16:8 diet is that it does not seem to work that well in reducing weight, but some papers suggest that such a diet can be helpful in prolonging lifespan. In fact, most eating regimes where consumption of food or calories is significantly limited for various periods of time seems to help prolong lifespan. And this I found curious.

A long-term human study done on 238 adults (aged 21 to 50) in 2007 called CALERIE (calorie restriction and cardiometabolic risk) found that two years of moderate calorie restriction significantly reduced cardiometabolic risks in people when their calories consumption were reduced by a mean of 11.9%. Less risk of cardiovascular events meant they tended to live longer.

Trials on calorie reduction on rodents and other test animals have seen impressive lifespan increases of 30% or more. Why this happened was not known and there were several theories. One plausible explanation was that calories restriction somehow affects one or more of the seven major consequences of aging, which are (1) altered tolerance of stress, (2) more inflammation events, (3) metabolism changes, (4) cellular damage, (5) poorer protein homeostasis (regulation of proteins), (6) epigenetic modification (DNA damage), and (7) loss of stem cell regeneration functions. A simpler theory in 2018 suggested that animals on lower calories tend to sleep more as their metabolic rates were necessarily reduced due to the lower quantity of calories. A small trial on 53 humans found that those on 15% less calories had a 10% lower sleeping metabolism rate, along with a small drop in sleeping body temperature.

At the end of two years, people on the restricted calorie diets were found to have cellular oxidative stress reduced by around 20%. The calorie-restricted diet therefore appeared to mitigate one or more of the seven major consequences of aging in various ways.

But I digress. Back on the subject of weight loss, it is obvious that the primary, singular requirement must always be a reduction in the consumption of calories. However, this is much easier said than done, especially when there is so much good food and wines available.

Therefore, it may be helpful to employ some tricks to further enhance the perceived “value” of every calorie eaten, so that mindless overeating does not happen too often. One idea is to unravel some of the fast-food marketing techniques which are designed to encourage the over-consumption of calories and other undesirable items such as fats, sugar, and salt.

With fast foods, one thing to note is that copious amounts of food arrive in your hands relatively quickly, usually accompanied by a sugary drink. Hence, one gets a psychological impression that such foods must also be consumed quickly, to match the speed of delivery. Also, the casual seating at such places tend to encourage fast turnover, so one feels the urge to eat quickly, basically cramming in calories and other undesirable foods as speedily as possible before moving on somewhere else. 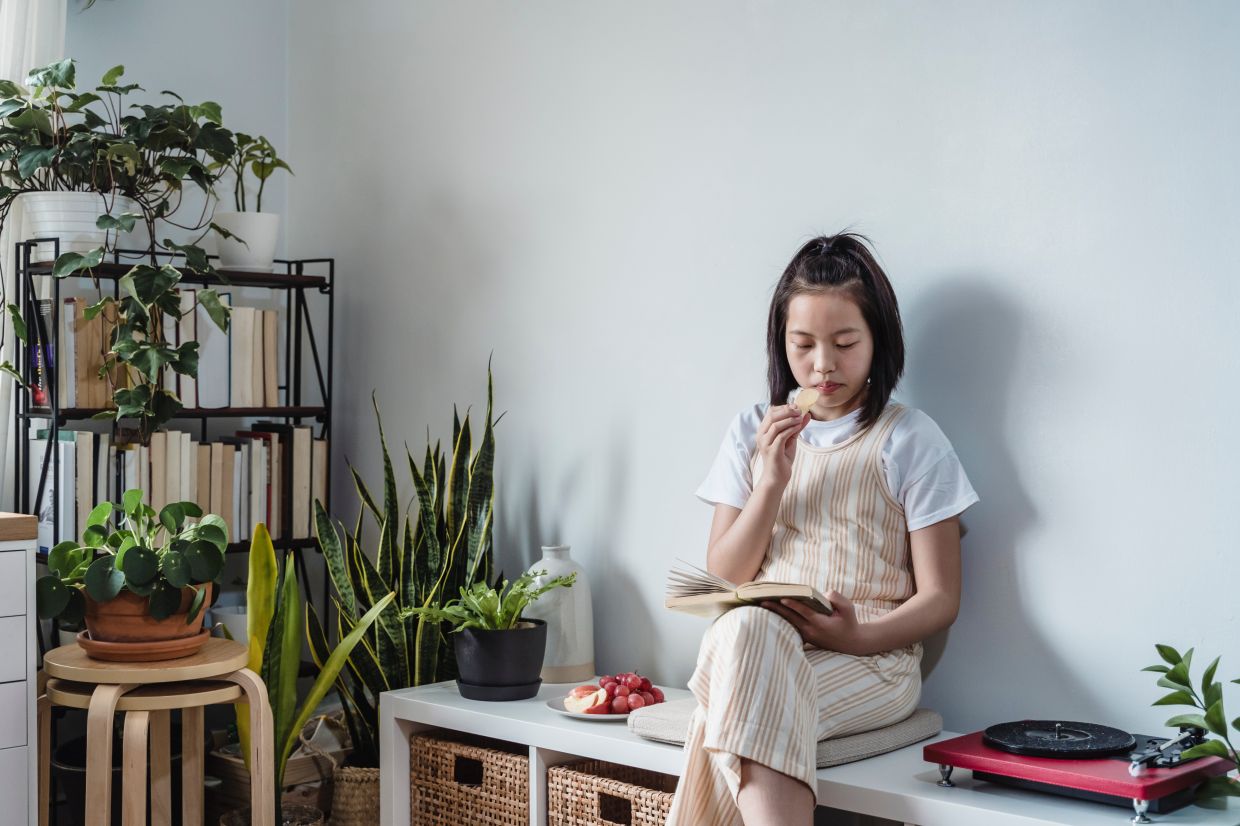 Studies have shown that people cannot really taste well in the presence of loud music, so it is best to eat in quiet corners. — ANNUSHKA AHUJA/Pexels

Hence, one simple technique is to do the opposite of what one is expected to do at a fast-food shop, and that is to eat purposefully and slowly, chewing each mouthful at least 30 times or more, so that the taste of the food can be extracted over a longer period. Do not have a sugary drink to accompany any dish as the drink can act as a dietary stimulant. That is because sugar (sucrose) is made up of fructose and glucose, and fructose stimulates hunger by increasing appetite stimulant hormones such as ghrelin and hypothalamic CB1 mRNA, which in turn decreases the activation of dietary satiety neurons.

Another thing to consider is the noise level when eating. There is evidence loud noises can trigger unhealthy eating habits; for example, people will tend to consume 30% more (sweet beverages or alcoholic drinks) in the presence of fast and loud music.

Other studies have indicated that people cannot really taste food well in the presence of a lot of noise. Therefore, if possible, eat in places with soft, light music, or a low level of ambient noise. In theory, in calm circumstances, one should enjoy food more and hence eat less of it.

Despite the fancy advertising, the reality is that fast foods are often presented in a grubby manner, suggesting that it is not worth the time to review it properly before eating. One gets, for example, 12 pieces of fried chicken in a bucket and regardless of the smell and taste, one cannot claim that a bucket of chicken is a pretty sight. This lack of visual appreciation means that eating fast food often becomes a “quick fix” for hunger as one seemingly does not care what goes into the mouth. Front loading means stuffing as big a bite as possible of a particular food to stimulate as many taste buds as one can. — POLINA TANKILEVITCH/Pexels

But eating properly should not be a quick fix. Next time you encounter a well-cooked dish, note the ingredients used, pay attention to the cooking technique used, appreciate the aroma, flavours, and textures of the dish; in short, learn to really enjoy a dish and the way it is constructed and cooked. The more one turns a good dish into a sensory experience, the more delightful a dish will become and then not only does one eat slower, but usually one would also eat less to feel satiated.

The focus should be on eating quality food, not huge quantities of cheap food enhanced with additives and flavourings. However, it is sometimes impossible to avoid unhealthy foods, such as sugary birthday cakes or celebratory doughnuts at the office.

If one is compelled to eat such foods, then a trick might be something called “front loading”; i.e. stuff as big a bite as possible of the item into the mouth to stimulate as many taste buds as one can. The brain tends to assume that subsequent bites will taste the same and be roughly the same quantity. Hence the novelty of the food item wears out rapidly, and then one is much less inclined to ask for another portion.

This “front loading” phenomenon is known amongst processed food manufacturers, and some of them use clever techniques to keep a food interesting for consumers. One old trick is to use multiple toppings or deliberately uneven layers in ice creams, so no two bites taste the same. Another technique is to vary the locations of the seasonings in the food item; for example, lasagne may have salt applied only on alternate layers, different cuts of meat are seasoned with separate herbs or cooked differently, etc.

Some time ago, I had already swapped our full-size dinner plates for smaller plates so that more food appears on the plate when served. It is a simple visual trick, and quite effective. Proof is we now eat around 75 grams of rice on the plate whereas we would be eating 100 grams in the past, and we do not even notice it.

In the end, one is less likely to overeat if one eats when fully using all of one’s senses, including the eyes. I have known about this for some time, and it is time I am more diligent about it, so that I can lose more weight quickly for the sake of the knee. Maybe you can now also figure out some other ways to make food interesting enough not to overeat.

If you've ever dreamed of living in a gingerbread house it's now possible
5 places in and around KL kids can visit during the school holidays
Workplace: Staying with the same employer forever?
Tips on the best ways to design by numbers
Faced with brutal drought, Kenyan herders look for hope underground
This new kind of window coating keeps interiors cool without air conditioning
Sniffer dogs to reduce coronavirus outbreaks at workplaces
How to get cozy with earth tones in your home
How the pandemic-era chair is designed both for desks and dining tables
FIFA World Cup 2022: Playing football with integrity