We could have taken the opportunity provided by Covid-19-triggered lockdowns to double down on renewable energy and decommission ageing, inefficient coal-fired power stations while power consumption was reduced – but, sadly, we didn’t. — AFP

There’s a very famous comic book called Watchmen, where (spoilers ahead!) a fictional alien invasion force is invented in an attempt to get the United States and Russia to stop the nuclear-age cold war between them and instead unite against a common foe. In 2020, Covid-19 presented the world with a similar opportunity to show that we could put our differences aside to fight a global threat. Yet we failed to rise to the occasion and stubbornly bickered over many things – including, in the early stages, whether the virus itself was a real threat or not.

When it comes to humanity, I am an optimist. I would like to think that our natural state is on the side of the better angels. That, when given the chance to find common ground, we can.

Yet my optimism has been severely tested by the number of times Malaysian leaders have chosen to bicker instead of buckling down to work together. The changes in government, the suspension of Parliament, even the question of who exactly holds the confidence of the majority in the august House – they are all arguments about who has the power rather than using power to help those in need.

Which makes the recent comments by some politicians somewhat refreshing. Firstly, Datuk Seri Dr Dzulkefly Ahmad cheered the announcement in early June 2021 that more than 117,000 vaccine doses had been administered. Any increase in this should be something all Malaysians should cheer, regardless of who was responsible for it (in this case, the Federal Government that Dr Dzulkefly’s party is currently in opposition to). Then Opposition MP Yeo Bee Yin also sent a message of congratulations, tagging government minister Khairy Jamaluddin at the same time.

I still saw responses on social media from their followers that said “Yeah, but...”. Take your pick: senior citizens still not getting vaccinated, crowded vaccination centres, Selangor not getting enough doses, etc. I mean, it’s easy to criticise, but I am just disappointed that instead of berganding bahu (standing “shoulder to shoulder”), we’re butting heads.

(A quick aside: This is your regular fortnightly reminder to get vaccinated and encourage all those close to you to do the same as well. Only after you do that can we get back to our tradition of arguing about politics face to face in mamak shops, instead of over video calls.)

Meanwhile, earlier this week, we saw both Prime Minister Tan Sri Muhyiddin Yassin and Opposition leader Datuk Seri Anwar Ibrahim give their versions of a national recovery plan to the public. Both are actually addressing the same issue, ie how the country can recover from the pandemic, but instead of working with each other, they gave their own takes in their own studios, with their own scripts.

It’s actually not too late for them to get together and take the best ideas from each other to come up with a viable, cohesive plan (both plans have strengths, really). But if the Special Independent Emergency Committee to advise the Yang di-Pertuan Agong on when to rescind the country's current state of emergency can’t find the time and place to meet up, perhaps it’s too much to hope for anything more complex.

The absolutely crazy thing is that as far as the pandemic is concerned, there is clearly light at the end of the tunnel. As vaccines roll out, the number of cases will go down. It’s just a matter of lining up efforts now so that the economy reopens in tandem with the improving healthcare situation, so that the engines of industry can ramp up to full speed as quickly as possible.

Covid-19 isn’t even the worst problem the world is facing. Climate change caused by global warming has long been an issue where too little is being done too late. To summarise again: Earth’s average temperature will rise somewhere between 1.8°C and 4.0°C by 2050, resulting in rising sea levels and more intense adverse weather events like hurricanes and typhoons. There will be a disruption of food supplies, accompanied by mass migrations.

I know everybody is talking about the terrible impact that Covid-19 has had on the economy. But at least the economic slowdown had a positive side effect on global warming, right, when stalled industries emitted less greenhouse gases and the world cooled a little? Well, it seems that the impact of Covid-19 on global temperatures was only very slightly better than what would have happened if countries had instead kept their pledges to reduce CO2 emissions. And now that industries are restarting, things are beginning to get bad again.

The pandemic was an opportunity to hit the reset button on so many things. For example, we as a nation could have pivoted to really accelerate digitalisation of the economy by forcing SMEs to adopt it (and be brave enough to abandon those that didn’t want to get on board). Or we could have taken the opportunity to double down on renewable energy and decommission ageing, inefficient coal-fired power stations while power consumption was reduced. Or learned a new language to make new friends with instead of bingeing science fiction TV shows on streaming platforms....

But instead we drifted back not quite to the worst versions of ourselves but possibly the apathetic, inadequate versions that took the least effort to return to.

Meanwhile, newish TV series The Nevers (spoilers ahead!) depicts an alien race that tries to help the world but humans end up fighting each other about how this should happen. The series hasn’t quite finished its run due to Covid-19 interruptions. But I do hope that my optimism isn’t misplaced, that in the end humanity eventually figures out what the right thing to do is.

Contradictheory: How to get reluctant family members onboard with vaccination

Contradictheory: Tech is useful but a human touch is what we need sometimes 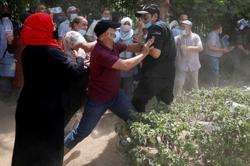