Contradictheory: Tech is useful but a human touch is what we need sometimes

Registering for vaccination with the MySejahtera app. — Filepic/The Star

Selamat Hari Raya to all! A time for feasting, reconnecting and forgiveness.

But to be honest, there was a point last week when I wasn’t in a very forgiving mood. It was to do with vaccine registration. As somebody who assiduously avoids the 3Cs and tries to practise the 3Ws, I was of course keen to get vaccinated. In my mind, it’s all about reducing the risk of infection even further.

But the truth is that I was having problems with my vaccine registration, and the MySejahtera helpdesk was ... shall we say, slow in helping. And at the same time, I was reading that a lot of people who did have confirmed vaccine appointments were not turning up on the day.

I admit, my problem was a result of my over-enthusiasm in creating multiple MySejahtera accounts. What could go wrong? Well, I was locked out of the first one (and couldn’t find a way back in) while the second one wasn’t allowing me to put in an IC number because it was a duplicate.

I called the vaccine hotline for help but when I explained the issue to them, they told me they dealt with vaccination not the system to manage the vaccination. They couldn’t edit any of my details.

I then turned to the MySejahtera helpdesk. Well, I say “helpdesk” but it’s more accurate to call it a Choose-Your-Own-Adventure menu system that leads to various outcomes, some of which may actually solve your problem. I couldn’t find those. For me, the challenge was to find the ending where I could type in my specific issue and hope I could get the point across.

The email from them telling me they received my plea for help came back very quickly. Unfortunately, the actual email with the help came much later. To be fair, they did warn me that it might take up to five days to respond, but the problem is that the email that replied provided plenty of help to a different problem, and when I responded to that, the follow up was also not very useful.

All I wanted was to talk to a human being about the specific issues I had and find a solution.

I think the same can be applied to those who didn’t turn up to their pre-arranged vaccine appointments. In Kelantan last week, it was reported that over 1,100 people did not turn up for their vaccination. That is already on top of the issue that only 26.56% of people in Kelantan have registered, according to the Special Committee for Covid-19 Vaccine Supply. It’s not necessarily much better for the rest of the country. In early April it was reported that 57% of those contacted for their vaccination appointment did not respond.

But I’m not surprised. If someone like me who wants to get vaccinated is finding it hard to find someone to share my problem with, what more those who have fears and doubts about the vaccine?

It all comes down to people talking to people.

I think we all understand where most of the hesitancy comes from. There is fear that the vaccines are unsafe, uncertainty if they are even needed, doubt that it is really better than some local remedy of choice. This FUD (fear, uncertainty and doubt) triumvirate comes from a neverending barrage of gossip fed by so-called friends and relatives.

I think part of the issue is the Asian predilection to avoid conflict, so if you ask, “are you getting the vaccine”, the answer would probably be “yes” if they think that’s the answer you’re expecting.

What is actually needed is a gently, gently, softly conveyed message that doing so is the right thing to do, and that things will turn out OK if you do.

Which was a bit how the technical issue I had with MySejahtera was resolved. After my nth flare up of the week (sometime after accidentally entering the wrong IC number – again – and receiving instructions that were essentially a repeat of their last email), I was taken aside by my wife, told to calm down, relax, while she looked for an alternative way to find help.

With a level head and superior Internet-ing skills, she discovered that MySejahtera had a Facebook page. More importantly, with its Messenger feature, she could have a conversation with a real human being about my problems (the technical ones, at least).

Although it still took a few days to resolve the issue, any time they gave advice that didn’t work, we were able to respond immediately, and they could acknowledge it right away with something as simple as, “I will pass this on to the technical team”.

That human assurance is I think a very important component in our fight against Covid-19. As anybody who has tried to decode the various movement control order phases can attest, the official SOP document is a PowerPoint hell of seven font sizes in two different font types, and understanding it takes on a form of “hunt the keyword”.

It is a formal document designed by committee, assembled by computer, with every ounce of human spirit squeezed out along the way. It is enforced by an almost arbitrary application of regulations so punitive that you might as well put people in solitary confinement for a year. At least they’ll be safer there. And the rules seem to keep changing all the time.

At the end of the day, somebody forgot to sit next to the intended audience and simply say, “Please keep yourself safe. Because people who are infectious look normal like you and me, assume that everybody is a risk. So whatever it is the government does allow you to do – be it to go into shopping malls or eat in restaurants or pray in mosques – just follow this simple advice: Avoid crowded places, confined spaces, and close conversations (the 3Cs); wear your mask, wash your hands, and warn others (3Ws). Take care of yourself, and God willing, you will keep everyone safe.” 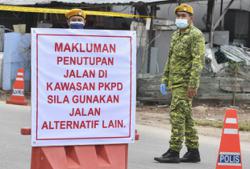