Noodles on a bike ride with his owner, Eric. — Photos: Ng Dai Ling

Do you have an interesting story about your pet that you would like to share with readers? Tell us in 600-800 words, with three to four photos (file size about 1MB). We’d love to hear from you. We reserve the right to edit all submissions. Send your story to: lifestyle@thestar.com.my.

I love nature and animals. All through my life, I have reared pets like fishes, rabbits, cats, hamsters, guinea pigs, tortoises and dogs. All of them gave me joy but didn't understand why many dog owners treated their fur kids like human beings – it was a great puzzle to me.

When I reached the age of 54, and without kids of my own, I suddenly felt the need to have a pet as a companion. I have a busy life with work, outdoor activities etc but I realised that I needed to prepare for retirement. Then came Yoda, a black, six-month-old mongrel that my mum got for me. He was a stray picked up from a street in Klang. I was thinking to myself,"Oh, no, not a black dog!" but my mum said,"Black is beautiful." I trusted her judgment.

Yoda was big for his age, I thought (you know how we like small puppies) but that boy warmed up to my husband Eric and also won my heart soon after. Yoda is very smart, and makes a great guard dog.

He is very smart, a great guard dog, toilet-trained on his own and super active. He would run along the length of our garden like a bullet train. I often looked at him and sensed that he would be with us for a long time.

Two years later, we adopted an eight-year-old Poodle named Noodles. Noodles came with all his fur knotted and had many rotten teeth. After grooming and having to pull out most of his teeth, he looked a picture of good health. Yoda took to him with no issues.

Papa would take Noodles out on bicycle rides and to work – and he was a happy dog.

Six months later, he was diagnosed with cancer. We were helpless and I asked God how unfair it was for Noodles. Why take him now when he had found love. My heart broke to pieces the day we had to let him go. I held him close and cried uncontrollably. I cried for months, every time I thought of Noodles. That's when I understood perfectly why many pet owners treat their pets like their own kids.

Several months later, Mumsie, who knew of my heartbreak, told me that there were two 10-year-old Shih Tzus, Jack and Rooney, available for adoption as their owner was dying of lung cancer. I hesitated at first because “10 years old” rang in my ears. I did not think I could go through another heartbreak, but the words "lung cancer" touched me. 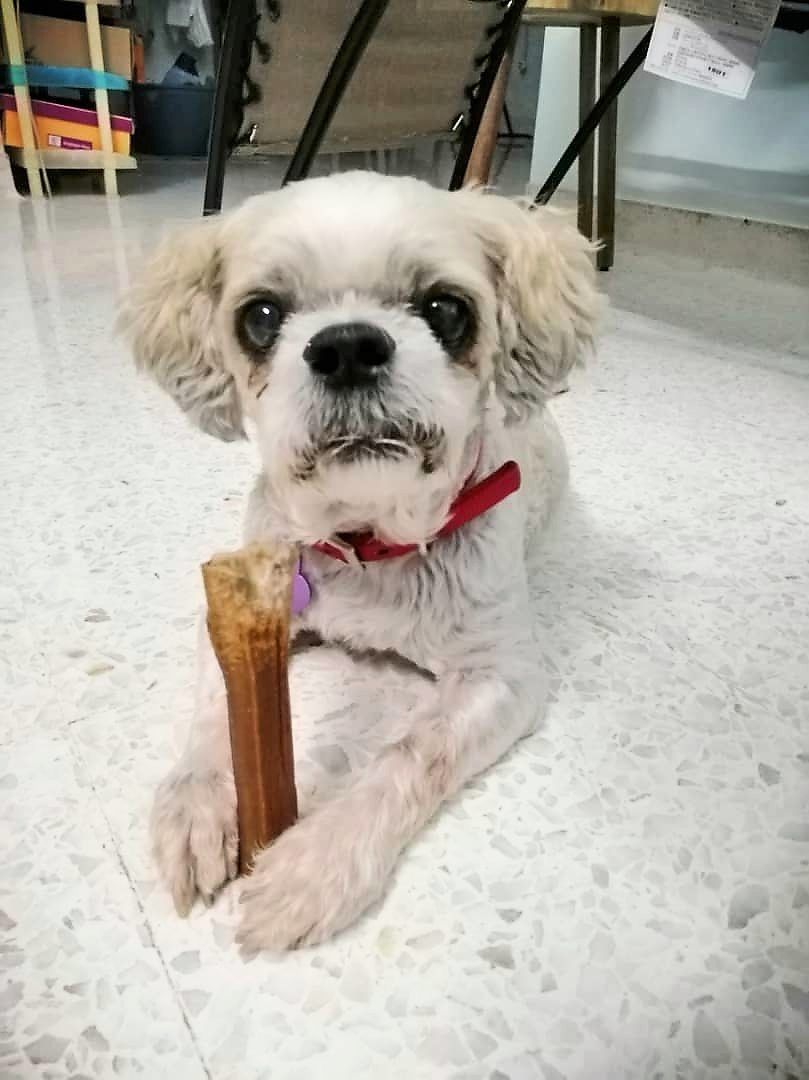 Jack was an extraordinary fur kid but he had a lot of character issues.

Eric and I decided to take the dogs. I was later told that Rooney was blind, and had skin issues and weak legs. Jack, on the other hand, had just had his cancer removed. We did not mind. All we knew was the owner needed to know that new owners had been found for her dogs so that she could leave this world in peace.

We did not have a chance to meet her as she became very sick. So I WhatsApp-ed her to reassure her that we would love her dogs like no other. Then soon after, she passed on.

Jack was an extraordinary fur kid but he had a lot of character issues. He was an abused dog before his current owner took him in. He refused to be touched. He hated Rooney and was jealous of him. We poured out a lot of love on him to try and convince him that we loved him just the same.

Jack died a year later when the cancer returned. We were devastated but we had more experience then to cope with the loss. Rooney is the most loved of all the writer's dogs.

Rooney on the other hand, I am not sorry to admit, I have never loved a dog as much as I love him. Maybe it is because he has more needs. We send him for full grooming and spa every three weeks. He has to take medication for his legs and skin. And his eyes need cleaning and medicating two to three times a day. But we love this fur kid dearly and hope he will live for many more years. I must admit that when the day comes for him to go to dog heaven, I will not be able to handle it but that's life, isn't it.

There are other dogs who have come (and are coming) our way. We have never bought any dogs as we believe there are already so many out there waiting for good homes.

I feel very sad whenever dog owners ill-treat their fur kids. Fur kids have the same right as humans to be respected and loved.

To all the dogs who have passed through our lives and for those yet to come, know this: “We love you all and thank you for giving us so much joy, for which we are eternally grateful. You have given us more than what we could give you."