Both gout and pseudogout manifest as a painful, red swelling over a joint. — Dr YEAP SWAN SIM

The term “arthritis” means inflammation or swelling of one or more of our joints.

It can be due to various conditions affecting the joints, tissues around the joint, or other connective tissues.

These conditions include osteoarthritis, rheumatoid arthritis, fibromyalgia and gout.

The symptoms usually develop over time, but they may also appear suddenly and affect one’s ability to perform daily tasks.

In Malaysia, gout is one of the most common conditions causing arthritis, predominantly affecting men and postmenopausal women. 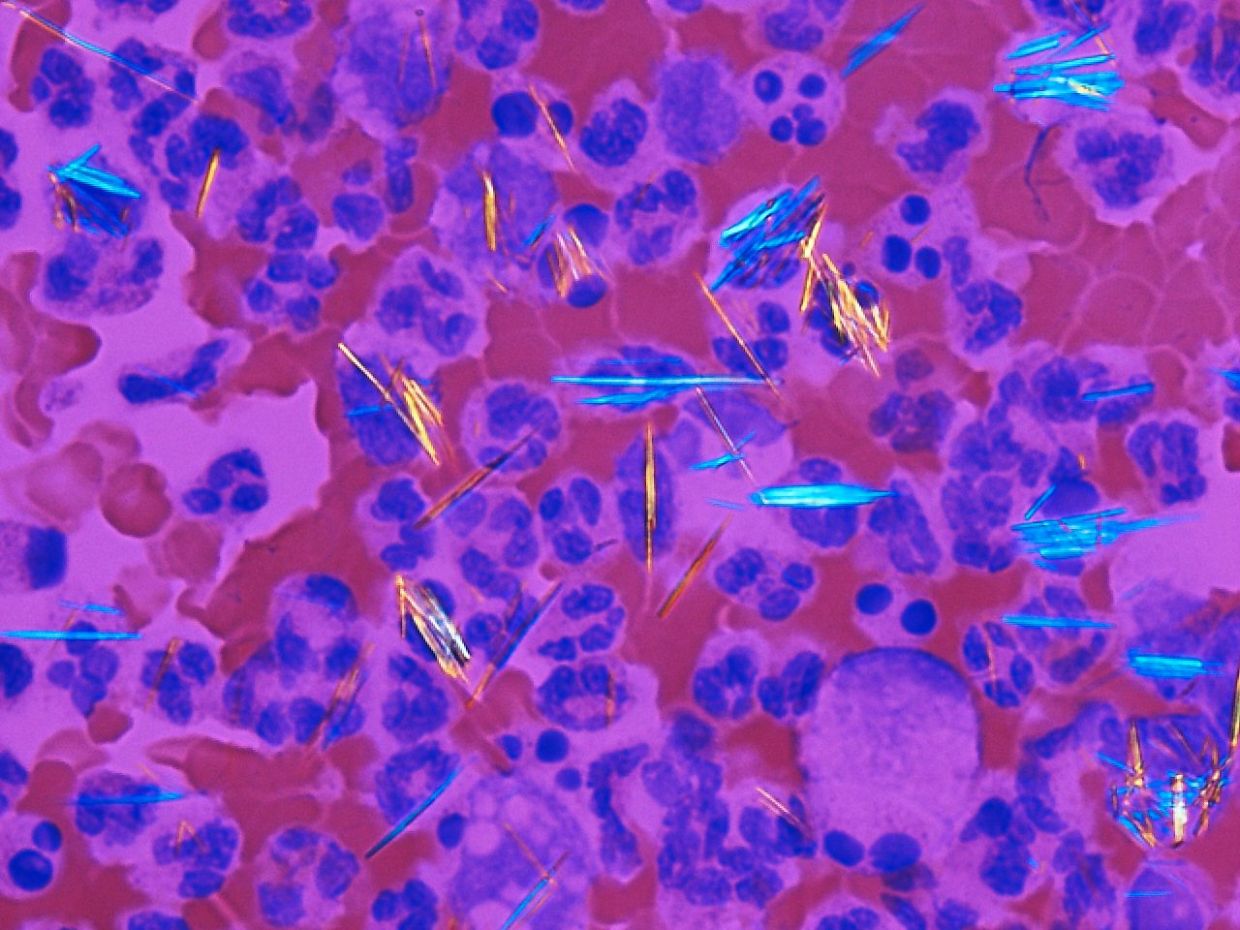 Gout is caused by the formation of uric acid crystals (the orange and blue needle shapes seen here under a microscope) in joints. — Photos: Wikimedia Commons

Gout can be considered a disorder of metabolism as it occurs when the body makes too much uric acid or removes too little uric acid.

The uric acid build-up in our blood can lead to the formation of needle-shaped urate crystals in the joint, causing severe attacks of pain, swelling, redness and tenderness.

Uric acid is produced when our body breaks down purines.

Purines are chemical substances that can be found naturally in our body and some foods.

Besides the consumption of a purine-rich diet, there are several other factors that may increase the risk of gout.

It often affects the big toe, but can also occur in any joint of the ankles, knees, elbows, wrists or fingers.

Symptoms in the affected joints include intense pain, swelling, redness and heat.

Even after the severe pain subsides, lingering discomfort in some joints may last from a few days to few weeks. 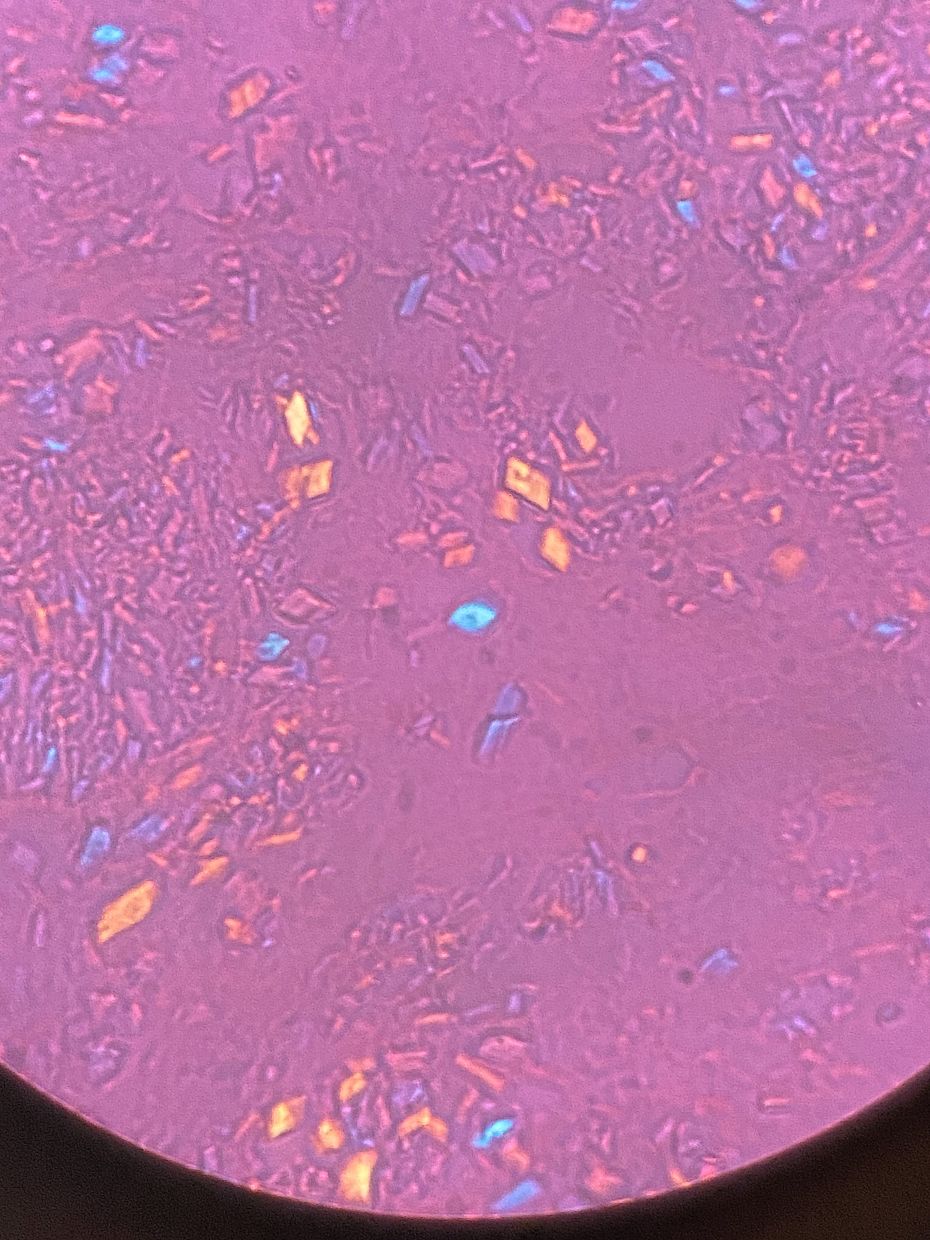 Pseudogout is caused by the deposition of calcium pyrophosphate crystals (the orange and blue rhomboid shapes seen here under a microscope) in joints.

Pseudogout, as its name implies, is also a form of arthritis that has many of the same symptoms as gout.

They are also both caused by the accumulation of crystals in the joints.

However, pseudogout is caused by intra-articular calcium pyro- phosphate crystal deposition, unlike gout, which is caused by the accumulation of urid acid crystals.

Among the risk factors for pseudogout are:

It most commonly affects the knees, and less often involves the wrists and ankles.

The methods of diagnosis for both gout and pseudogout are similar, and include: 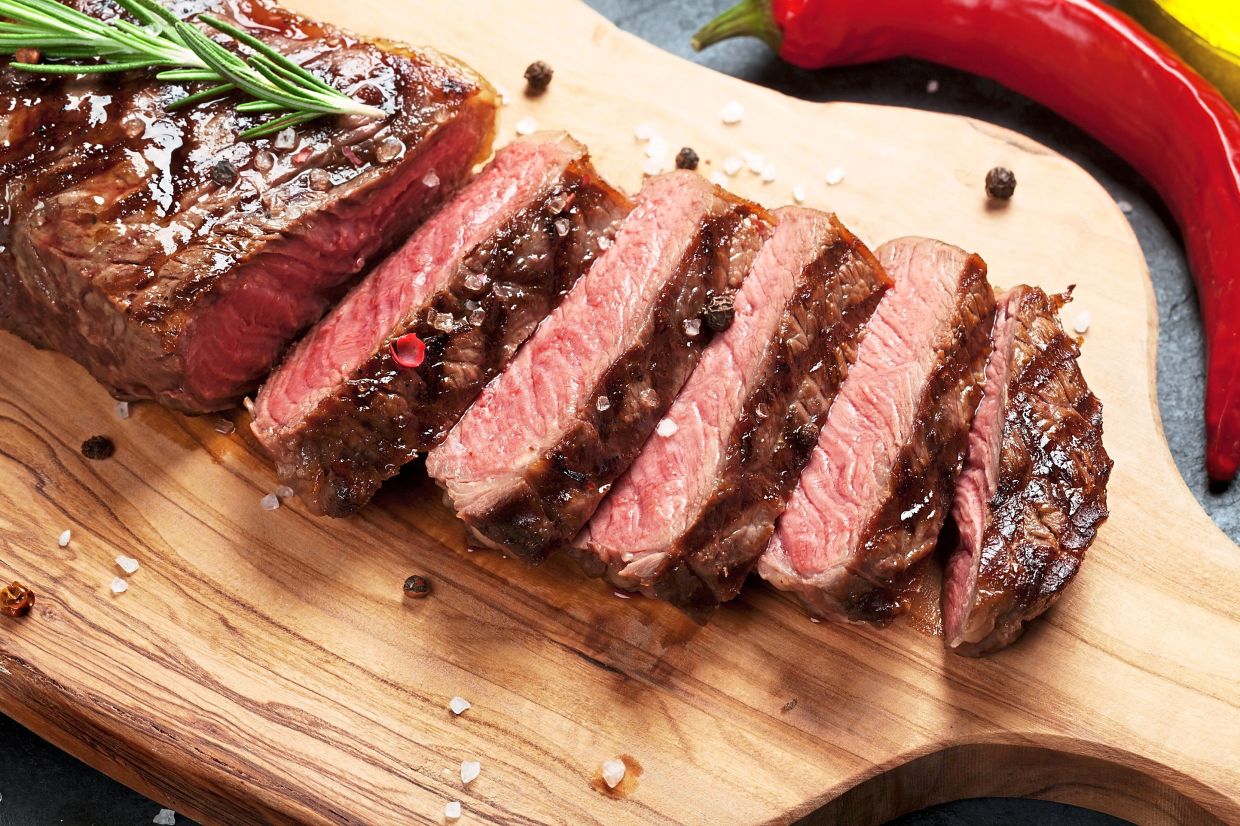 Red meat is a no-no for patients with gout and pseudogout as it is high in purines. — AFP

The available treatments help to relieve pain and reduce inflammation for both gout and pseudogout include:

Removing some of the joint fluid helps to remove some crystals from the joint.

This treatment is carried in order to relieve pain and pressure in the affected joint, as well as to improve movement of the joint.

Sometimes, medication will be injected following removal of the fluid to help to reduce the inflammation.

While medications are available to effectively treat gout and pseudogout attacks and prevent flares, adopting healthier lifestyle measures is also important to lower the risk of recurring attacks.

Maintaining a healthy weight helps to reduce the risk of gout.

Activities such as walking and swimming are preferred as these activities are easier on the joints.

Foods high in purines, such as red meat and organs, as well as purine-rich seafood like sardines, anchovies and scallops, should be avoided.

Those prone to gout are advised to consume more low-dairy pro-ducts as an alternative source of protein.

These lifestyle modifications are highly encouraged, and when combined with drug therapy, could lead to better control of both gout and pseudogout.

Dr Wendy Yeo Wai Yeng is a lecturer in biochemistry and medical biotechnology, and Dr Radha Kodiappan is a senior lecturer in molecular genetics and biochemistry, at the Perdana University Graduate School of Medicine. This article is courtesy of Perdana University. For more information, email starhealth@thestar.com.my. The information provided is for educational and communication purposes only, and it should not be construed as personal medical advice. Information published in this article is not intended to replace, supplant or augment a consultation with a health professional regarding the reader’s own medical care. The Star disclaims all responsibility for any losses, damage to property or personal injury suffered directly or indirectly from reliance on such information.

It's important to have fun after retirement

One symptom of Parkinson's disease is a loss of facial expression 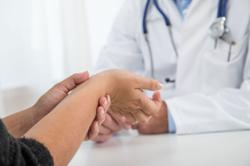