Lafite celebrates with a nod to nouvelle cuisine

THERE’S this picture of Lafite when it first opened, showing a woman with fluffy poodle-like hair sitting in one of its highback, winged bergere chairs. It bumps me back to the 80s.

I’m glued to the TV watching Alexis Carrington – played by Joan Collins – plotting another vengeful scheme in the soap opera Dynasty. Blame it on the big hair and bold makeup.

The 80s in French cuisine was a time influenced by chefs such as Paul Bocuse, Michel Guérard and the Troisgros brothers. Since the 70s, chefs had started to present a lighter and fresher style of cooking that is also more seasonal known as nouvelle (new) cuisine, as a departure from the old haute (high) cuisine, which relied on heavy and rich sauces and complicated preparation methods.

Lafite and the Shangri-la Hotel Kuala Lumpur opened in 1985. It was also the year China welcomed Mickey Mouse, Gorbachev came to power, the first Internet domain name was registered and the first British mobile phone call was made.

Thirty years on – the Internet has changed life as we knew it and everyone has a mobile phone – Lafite’s chef de cuisine Jean-Philippe Guiard is tasked to recreate that first menu to celebrate its anniversary. 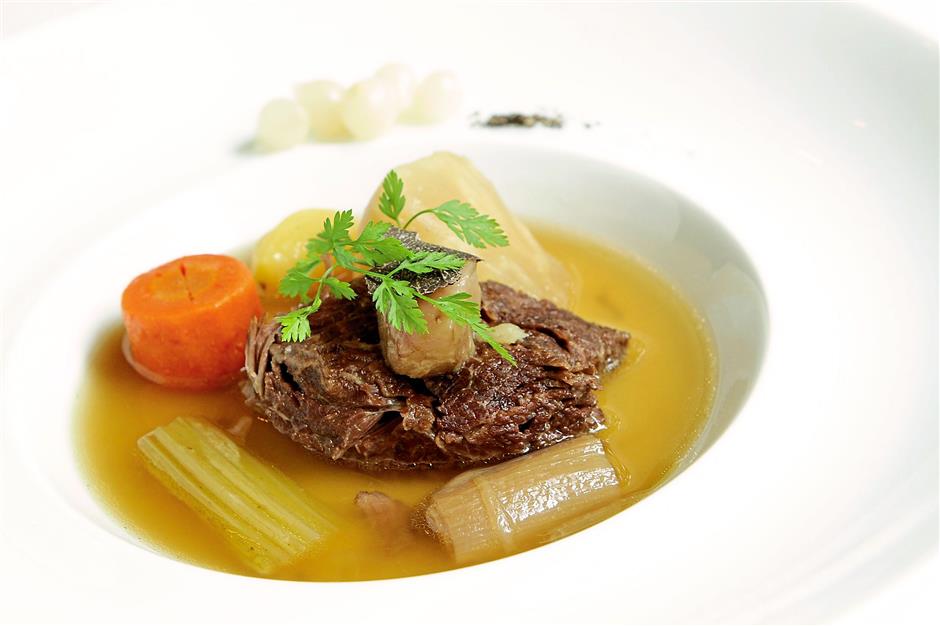 The original menu is buried in the sands of time so Guiard created a typical menu of the 80s. His interpretation is both elegant and true to the spirit of the time and his modern sensibility.

“This menu is like something Joel Robuchon would do when I was working for him in Paris in 1996,” says Guiard.

The time travel starts with the amuse bouche; the amuse bouche, incidentally, came into fashion – you guessed it – around the 80s, during the early days of nouvelle cuisine. Also around this time, chefs started to send out elegant, individually plated dishes.

Guiard’s bouche is a tiny pop of foie gras in port wine jelly roll propped up with berries. Liver mousse with jelly doesn’t seem all that retro – you still see it around – but the idea of a roll is kinda old school if you think Swiss roll.

The roll, er, rolls in again in the starter, Salmon “Bellevue” with steamed tiger prawn, salmon roulade and salmon roe. Google tells me that salmon Bellevue is dressed salmon and pictures of poached salmon covered with cucumber ‘scales” pop up. Now that is quaint.

I’m glad Guiard didn’t take the exercise too literally: his salmon is cooked sous vide and covered in lobster bisque foam – although the sous vide technique existed a long time ago, it was popularised only in the last decade and the use of espuma rides on the influence of molecular cuisine.

The result is a piece of salmon that’s still pink, tender and moist – results that even the great Robuchon would not have been able to achieve without the sous vide machine.

Another little touch that Robuchon wouldn’t think of adding in the 80s is to anoint the salmon with tiny droplets of curry-flavoured coulis. They are the size of a wart but the coulis delivers a surprising depth of curry flavour that can be described as explosive. Guiard is tight-lipped about how this is done – chefs with secrets get frowny faces from me but Guiard is a nice guy and I would like to think that he is just kidding. Comfort food perfection: Poached white asparagus with Hollandaise sauce and egg mollet. The sturgeon
caviar bumps up the luxe factor by quite a few notches.

The second entree is comfort food perfection: Poached white asparagus with Hollandaise sauce and egg mollet. Salted with caviar, mais oui. In case you want to know, it’s Aquitaine Siberian sturgeon caviar from Gironde in France. If you have been buying cheap caviar from the supermarket and wondering what’s so great about caviar, try this and you will know.

Then comes the dish that makes it worth your while to make a special trip to try this menu: Beef cheek pot au feu, bone marrow and roasted duck liver. Clean, clear and focused, it’s simplicity perfected. The beef achingly tender, the consommé naturally flavourful, and the other members on the dish play their role as well: the bone marrow giving an unctuous richness, the celeriac lending herby nuances that didn’t go unnoticed. But no one could find the foie gras taste that’s supposed to be there. But it’s forgiven as there’s a slice of truffle in its place.

We come to the end of the meal rather quickly – you know what they say when you are having a good time. Again, the chef could not resist adding a modern riff to the Traditional vanilla millefeuille, vanilla ice cream and caramel sauce – the salted caramel gives it the edge. The Adam Tihany-designed dining room now looks dated – it was rennovated in 2002 – but still, it has that hallowed air that you find in sacred places and museums, and prestigious restaurants and clubs. It’s the kind of awe you get when you meet perfection.

Everything is still generally pleasing here, from the service to the food, and the garden views. It’s named Lafite for a good reason – Chateau Lafite is a wine guaranteed to age well. Lafite has proven to be a restaurant for everyone with deep pockets.

The four-course menu at Lafite is available for lunch and dinner throughout April for RM295nett (RM235 without the asparagus). On April 20, there will be a 30% anniversary discount on the food bill when you dine in at any restaurants in the hotel. For reservations, call 03-2074 3900.