To mark the occasion, the 60-year-old singer decided to take new wedding photos. He then shared photos of Lee and himself wearing the Qun Kwa and Tang suit, respectively, on his social media accounts.

"In the past 10 years I've always wanted to take a set of pictures of me and my wife wearing traditional wedding costumes, but we never really had a chance.

"This time, to commemorate such a special day in [our] lives, my wife and I both felt that it's a good time to wear the traditional costumes to take pictures for memory's sake," To wrote.

On his social media, To also repeated his wedding vows to his 36-year-old wife.

"In the name of God, I, Alex To, take you, Ice Lee, to be my wedded wife, to have and to hold from this day forward, for better or for worse, for richer or for poorer, in sickness and in health, to love and to cherish, until death do we part,” he wrote.

And that's not all. The Believe In Yourself hitmaker also released a new song, Oh Love, specially for Lee on their anniversary. 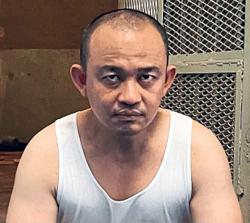