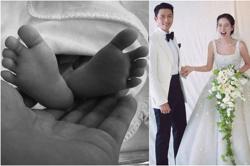 Both their management agencies confirmed the news, with Son’s agency, MSteam Entertainment, saying in a statement that both the mother and child are healthy.

The baby was due in December, but arrived early.

According to South Korean media reports, Hyun Bin, 40, missed his son’s birth as he is filming in Mongolia.

The K-drama darlings, who fell in love on the set of hit series Crash Landing On You (2019 to 2020), went public with their relationship in January 2021.

They held an intimate wedding ceremony in March with a number of South Korean celebrities in attendance and announced the pregnancy three months later. – The Straits Times/Asia News Network