For those who wondered which version of Marvel's Nordic demigod would appear in Thor: Love And Thunder, Chris Hemsworth sent an undeniably brawny message.

Hemsworth, 38, is ripped like never before in the fourth Thor film after comically showing off the superhero's slothful side in 2019's Avengers: Endgame.

In Love And Thunder, the 1.9m Hemsworth flouts his powerful physique as if the costume department didn't have the material to cover his arms. Or his backside.

Hemsworth chalks up the noticeable new thunder to being restless Down Under during the pandemic, where he was homebound in Australia with wife Elsa Pataky and their three children (daughter India, 10, and twins Sasha and Tristan, eight).

"It came from boredom, sitting in Covid lockdown was like a prison," says Hemsworth, whose routine included swimming, martial arts, weights and 6,000 calories a day to reach Asgardian awesomeness.

"It was train, eat, train, eat. Nothing else to do. Then I turned up for the film bigger than I've ever been."

ALSO READ: 'Thor: Love And Thunder' postponed again in Malaysia, this time with no definite date from Disney

Somehow, there are detractors – including Pataky, who tolerated beefcake Thor.

Still, the physique reviews are glowing for Love And Thunder (USA Today's Brian Truitt noted "plenty of rippling biceps" in his enthusiastic review). And big muscles are needed for story reasons in the battle against villain Gorr the God Butcher (Christian Bale). 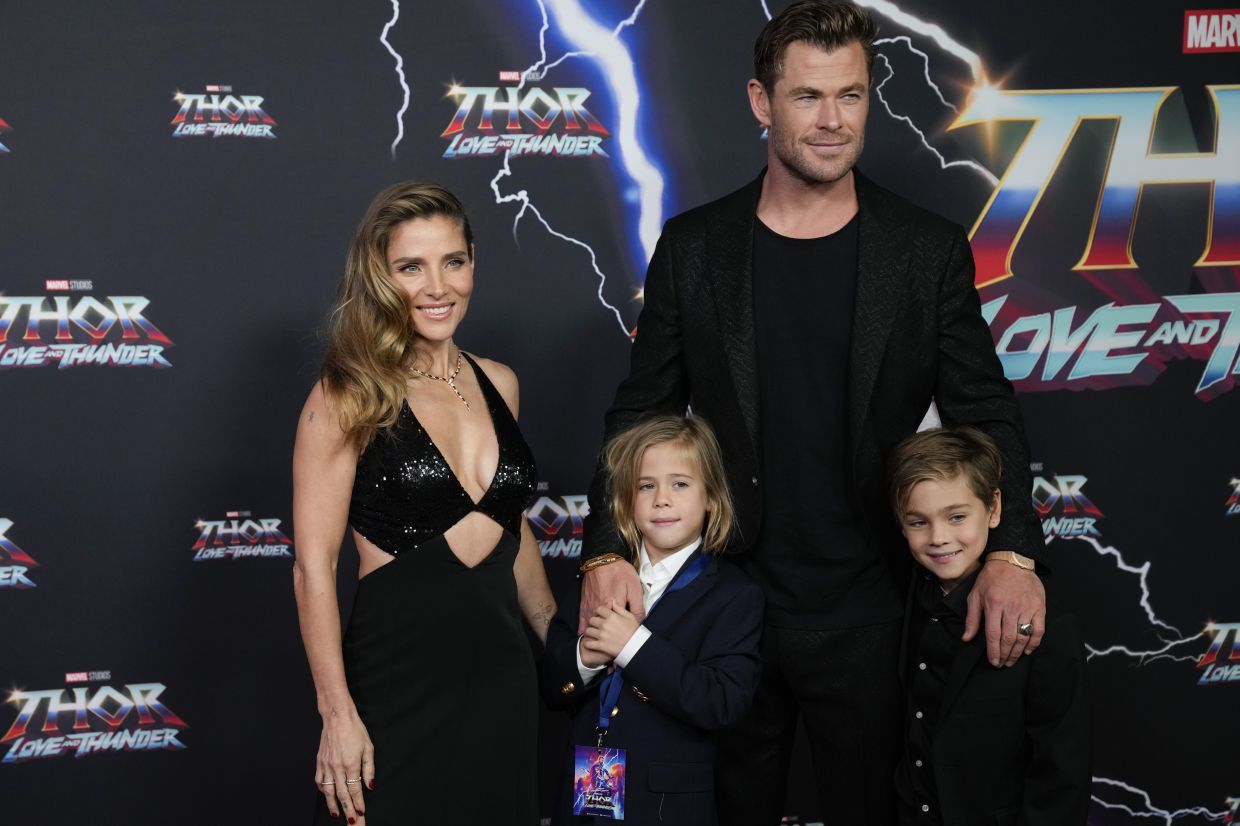 Australian actor Chris Hemsworth and and his wife Elsa Pataky pose for a photo with their twin boy's Tristan and Sasha during a red carpet event for the movie premiere of 'Thor: Love And Thunder' in Sydney, Australia. Photo: AP

Hemsworth's OG Thor was almost too big for his own good when he showed up for work.

In what sounds like a Love And Thunder outtake, Hemsworth recalls having an a-ha moment in conversation with a friend who pointed out the challenge of staying on the body mountaintop for the entire four-month shoot.

"I was like, 'Oh, yeeeeah, you're right,'" Hemsworth says. "It was one thing to train and eat that much and then sleep all day.

"Doing this and then a 12-hour set day was something different. It was horrible. I won't do it again. They can give me a fancy muscle-y costume next time. I'm done."

He vows the muscles will fade a bit in any future Thor appearances. – USA Today/Tribune News Services

Release date for Thor: Love And Thunder in Malaysia has been postponed indefinitely.