When she was 15 years old, Iman Vellani once cosplayed as teenage superhero Ms Marvel, with a costume made by her grandmother.

Little did she know then that four years later, the 19-year-old Pakistani-American actress would actually be playing that very superhero in her own Disney+ Hotstar series, Ms Marvel.

During a roundtable interview with Asia Pacific journalists before the series premiere in early June, Vellani said it was ‘super weird’ to be wearing the actual costume for the TV show.

“I dressed up as Ms Marvel when I was 15 years old, and my grandma helped me make my cosplay,” she recalled. “So the fact that I had this beautiful, like tailored version (of the costume) that just incorporated so many like little cultural prints was just unreal.

“I just couldn't process that this was even happening. And then I had to go to the bathroom, and I needed help for that. So that's the kind of thing that grounds you.”

Kamala Khan gets her powers from a magical bangle she finds among her family's belongings.

At the time of writing, only three episodes of Ms Marvel have streamed so far, but the series is already garnering praise not just for Vellani’s earnest and endearing portrayal of Kamala Khan (a.k.a Ms Marvel), but also for its honest portrayal of a Muslim American family and its culture.

During the interview, Vellani said the script and show really hit close to home for her, as she never thought it would be possible for a Pakistani-American superhero like Kamala to even exist.

“The fact that a franchise as big and as accessible as Marvel, with movies playing all over the world, is creating a space for Kumala and (other) characters like Shang Chi is just so wonderful. And it truly sets the example for other studios and other people tell their own stories.

“Obviously, Ms Marvel cannot represent every single South Asian or Muslim person, but it's a good start,” she said, adding that even being in Hollywood was something she never even dreamed of.

“My entire family is very academic. My brother's an engineer, my mom's a nurse practitioner, my dad's an accountant. So I was like, am I supposed to be a lawyer or something?” she said with a laugh.

'Ms Marvel' has been garnering praise for its honest portrayal of a Muslim American family and its culture.

Besides the cultural aspect, Vellani also saw a lot of Kamala in herself, as a fan of superhero culture in general.

“I've been practicing my superhero pose long before I even got cast! It's just so much fun to see a character like Kamala, who really represents everything about fan culture and fandom, becoming a superhero herself,” she said.

“She reacts the same way that any of us would if we got superpowers, and that fascination and excitement is so infectious, and shared with every single Marvel nerd out there.”

Of course, being in one MCU show doesn’t mean it just ends there. Kamala’s journey is already set to go beyond the TV show, as she will also be in the upcoming The Marvels feature film.

The movie will also feature Brie Larson’s Carol Danvers/Captain Marvel and Teyonah Parris’ Monica Rambeau (who also once went by ‘Captain Marvel’ in the comics before Danvers claimed that title as her own).

“I didn't even know about The Marvels until a month after I got cast! Right before they announced it at (Disney showcase event) D23, I got texts from Disney PR, Brie Larson and our own producers, saying ‘You're in the movie!’. I really couldn't believe it,” she said, adding that being a fan of the MCU in the first place, she is still coming to grips of actually being part of it.

“I grew up loving the MCU and I still consider myself a fan first and just seeing all these giant billboards of myself is super awkward and weird. I’m kind of like disassociating myself from it, but it is what it is, and it’s cool.”

Fortunately, she had Larson to help guide her through the, er, marvel of being in the MCU, mirroring the way Captain Marvel mentors Ms Marvel in the comics.

“Brie and I had a lot of conversations about dealing with the (feeling of) imposter syndrome (I had),” Vellani recalled. “I asked her if it ever becomes normal – you know, seeing your face that big on a screen or on a billboard or on posters. It's just so unnatural for any human to get that amount of attention!”

“She told me it never gets normal, and that it feels like it's always happening to someone else. Even though she's such an successful and established actor, she was still feeling the same things that I felt and, and knowing that we're kind of going through it together is was very comforting," Vellani said.

Ms Marvel is now streaming on Disney+ Hotstar, with new epsiodes every Wednesday. 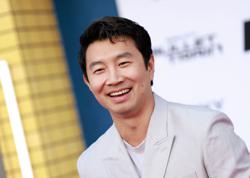