Owen Grady (Chris Pratt) has one ferocious creature on his tail. Photo: Handout

“We were very much so at similar stages of our development as people.”

The 41-year-old was speaking to the global press at an online interview session for the new film Jurassic World Dominion, which is out at cinemas nationwide starting from June 9.

Howard and Pratt are the mainstay of the latest three films in the Jurassic franchise, starting with 2015’s Jurassic World.

According to her, she was initially not allowed to watch Jurassic Park, but her dad – director Ron Howard (Willow) – changed his mind after he watched it on premiere night.

“I remember my dad saying, ‘This movie has changed cinema forever. You have to see it in the theatre.’

“So, on that Saturday, I went and saw the movie. And I actually got emotional because... I knew that what my dad said was real and that the movie had opened up all these new possibilities.

“That experience has always stayed with me, and I yearn for that when I go to the theatres. It’s an incredibly high bar that Jurassic Park has set, and we all reach for it.” 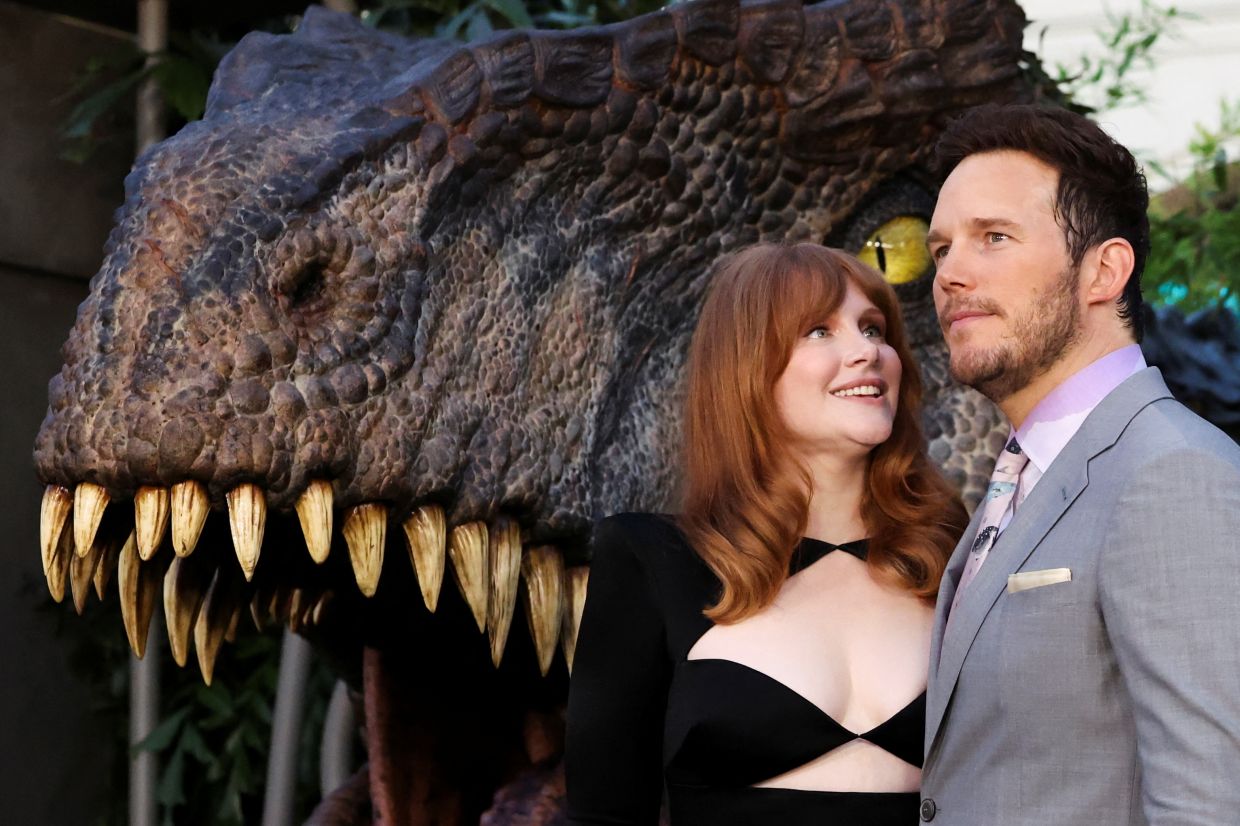 The Jurassic World films are spin-offs from that first movie, which itself is based on Michael Crichton’s novel of the same name and spawn the sequels Lost World: Jurassic Park (1997) and Jurassic Park III (2001).

14 years after Jurassic Park III, Jurassic World arrived in cinemas to breathe new life into the franchise. The 2015 reboot was set at an upgraded theme park featuring cloned hybrid dinosaurs.

Before you can say “T-rex”, history repeats itself and everything goes helter-skelter as dinosaurs run amok in the park.

Naturally when you want to conclude a story that has gone on for almost three decades, it has to be both innovative and nostalgic.

The latter is especially apparent throughout the movie. The most obvious nostalgia is in the cast.

Director Colin Trevorrow explained that these characters were brought back not only to acknowledge “the shoulders of giants that we were standing on” but also to “tell more of their story and to give closure on all of them”.

Trevorrow mentioned: “I would hope, when a kid born today watches all six movies – probably in a row over the course of two days, the way we watch things now – they’ll really feel a complete story.” 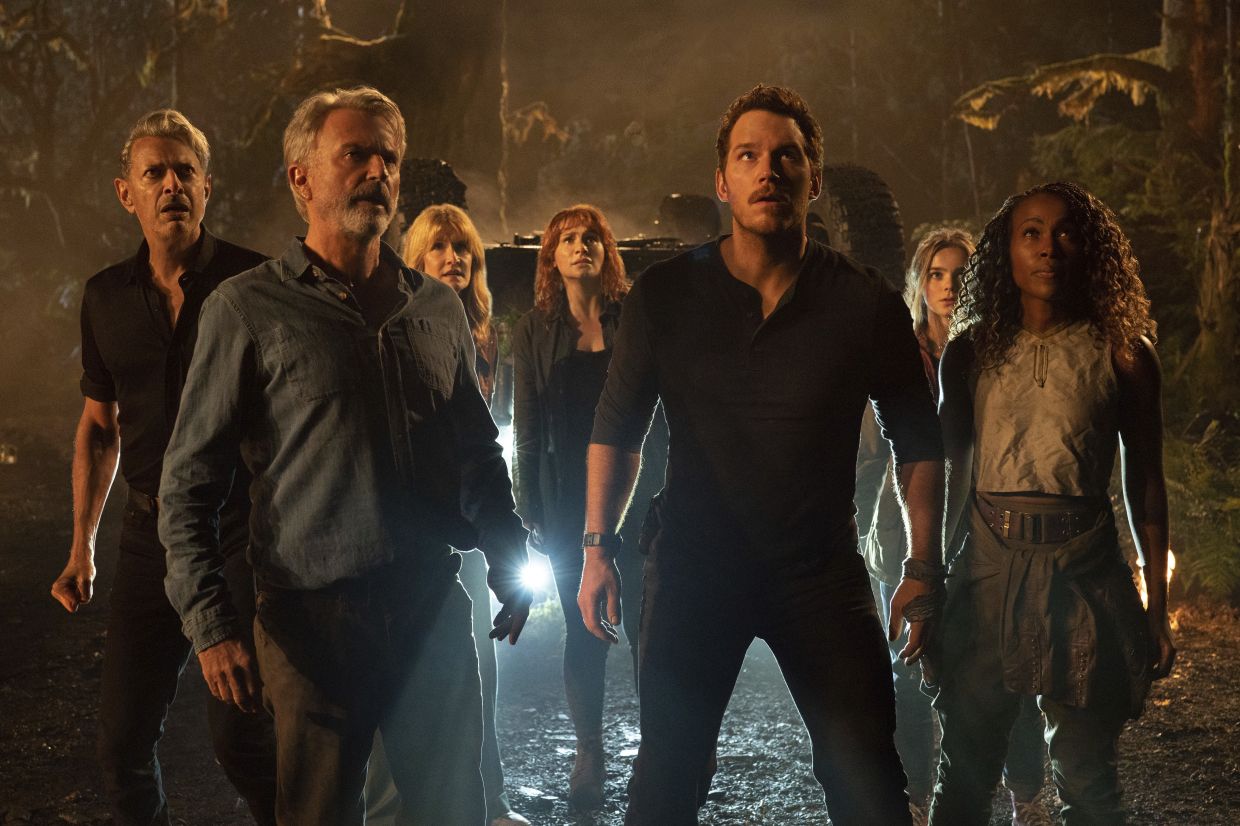 Dominion takes place four years after the events in Fallen Kingdom, and a lot has changed in that time.

With Isla Nublar destroyed (where the theme park was located), dinosaurs now live and hunt alongside humans all over the world.

“We’re not saying that dinosaurs are everywhere. But they have proliferated to a degree that they aren’t just relegated to an island,” said Pratt of the film.

“They are in various parts of the world and we get to follow those storylines around the whole world. So, this film feels different. It feels more epic, more global.

The 42-year-old continued: “It’s a different world, which makes for a more colourful, vibrant movie with landscapes that aren’t just jungle.

“We have, you know, high mountain desert and amazing chases through cities, and the grand aerial fights between aeroplane and dinosaurs. It just makes for a different kind of movie.” 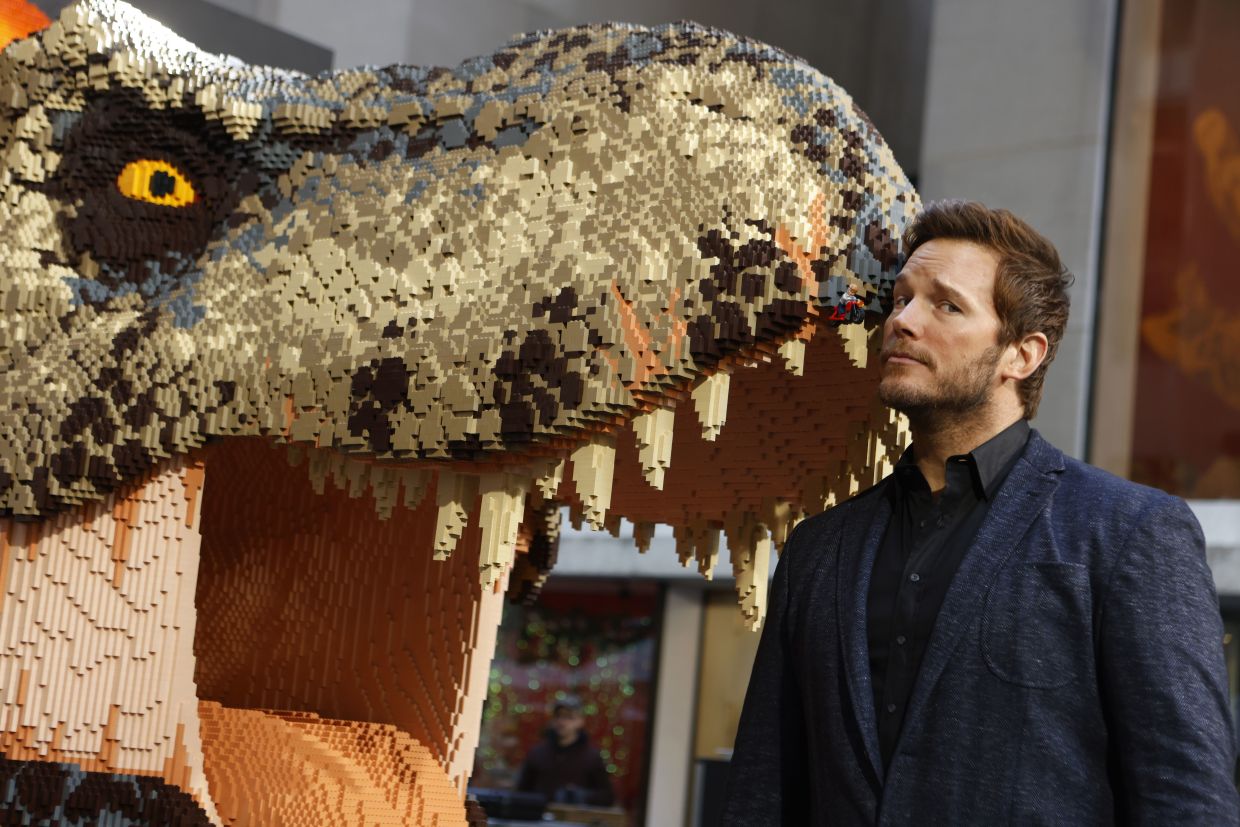 But what is not so different is that there are still individuals who want to take advantage of the situation like black market trade in all-things related to dinosaurs.

In the middle of it also is a powerful biotech company that’s busy developing new and dangerous species through genetic modification for its own financial benefit.

This establishment is headed by a character last seen at the end of Jurassic Park – the person who hands an empty can to the would-be smuggler of dinosaur embryos.

Trevorrow said that the main message in Dominion is of the need for humans to respect the power of the natural world.

The director explained: “I think this movie, you know, beyond the story that we’re telling, is to really look at how the misuse of genetic power could really threaten the world.

“This, I feel, is something that Michael Crichton would have been interested in and this honours him in a way.” 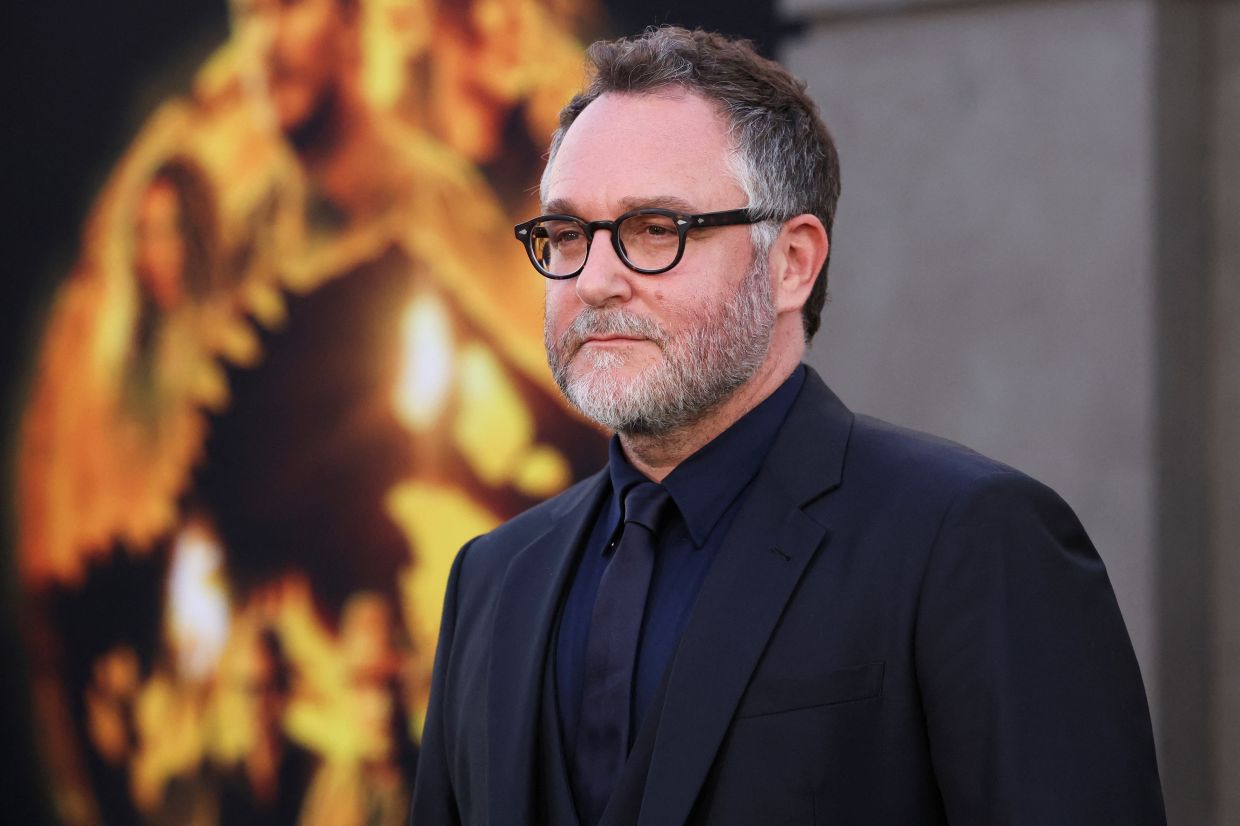 Director Colin Trevorrow says he is a huge fan of dinosaurs and working on the films only deepened that love. Photo: Reuters

While the environmental message – one that explores extinction and corporate greed – is crucial in the whole franchise, let’s be honest, it is the dinosaurs that really set the Jurassic franchise apart from other movies on the big screen.

And for Dominion, Trevorrow – who is a self-confessed dinosaur fan – really pushed the envelope where these prehistoric creatures are concerned.

It boasts dinosaurs that viewers have seen in other Jurassic films as well as lots of new ones like feathered dinosaurs. (The very first fossil dinosaur skeletons with feathers surrounding them were found in China in 1996.)

Trevorrow also put a lot of effort in depicting these extinct animals’ behaviour, posture and environment as accurately as possible on the big screen by working with experts.

To further add the realistic touch to Dominion, the American filmmaker brought on animatronic specialists to create 27 additional individual dinosaurs that actors can see and touch on set.

All this is so audiences will once again be awed with the dinosaurs on the big screen, in the same way that Jurassic Park made its viewers think that dinosaurs were alive again, some 30 years ago. 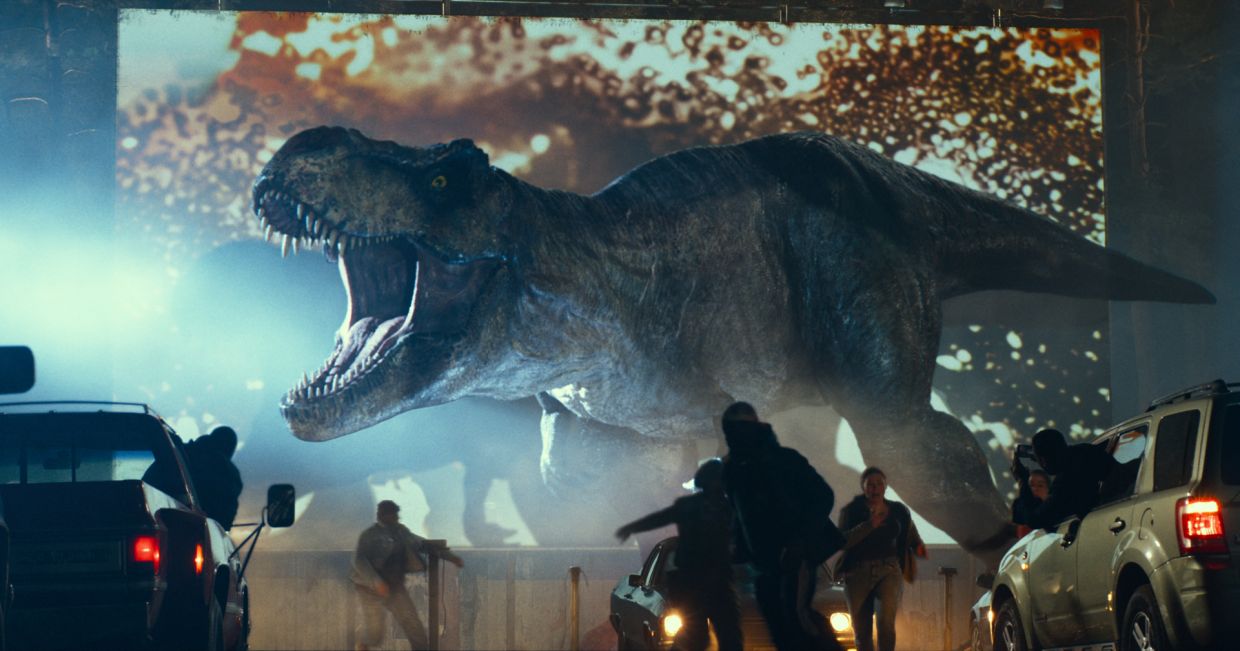 One thing that sets Jurassic films apart from other films is the dinosaurs. Photo: Handout

Trevorrow shared the allure of dinosaurs with StarLifestyle: “You know, there’s something about dinosaurs that is different than monsters or kaiju, or any other kind of fantastical creature that people all around the world feel a real connection to.

“And it must have something to do with, you know, our shared history on this planet.

“The fact that we know that they walked the earth, that their bones are in the ground – there’s something really meaningful about that.

“It’s also very rare that there can be something like this that unites all of us, that we’re all fascinated by. It’s this extremely rare gift for a storyteller.” Swimming away from dangerous prehistoric creature is one way to do it. Photo: Handout

Of his own relationship with dinosaurs now, compared to when he started this whole project with Jurassic World, Trevorrow stated: “You know, I think that in the time since we started these films, the world has changed.

“And I think that we’ve had to all ask ourselves questions about the choices that we’ve made, that have led to really dire consequences that all of us are unsure how we can possibly deal with.

“And I think dinosaurs, for me, have always placed us humans in great context – they are evidence that we have only existed on this earth for this tiny sliver of time and all of its history.

“That context is really helpful now as we try to figure out ways to solve all of the problems we have. And hopefully it’ll encourage us to do it together as we can’t do it if we’re divided.”

EXCLUSIVE: Korean actor Ji Chang-wook says success is 'worth nothing' if you're not happy