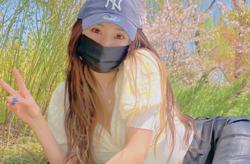 Lee Jinglei shares photo of Wang Leehom accompanied by other men (left) when he came to meet the children. Photos: Lee Jinglei/Instagram

Taiwanese-American singer Wang Leehom's divorce saga is back in the limelight after his wife Lee Jinglei broke her silence on social media with her first post in three weeks.

The Taiwanese media reported on Sunday (Jan 9) that Wang had completed his quarantine after returning from China and reportedly went to meet his children.

Wang, 45, and Lee, 35, married in 2013 and they have three children aged three to seven. He announced their divorce on social media on Dec 15 and she responded with an expose in which she accused the singer of having had multiple affairs and being an absent father.

Lee disclosed on social media late on Tuesday (Jan 11) that she had requested Wang not to have anyone else with him when he came to meet their children.

"You ignored my objections and took along two men without my consent to press the doorbell," she wrote in Chinese, saying that she had met the two men only at his work functions.

"I asked you through the door to let them wait downstairs, but you refused and threatened to not see the children if I did not let the two men in."

She added that Wang had asked her to stop the recording of the closed-circuit television (CCTV) before he would enter the apartment.

"I asked you not to leave as the children would be very sad if you do so. They have been waiting for you to come back home for a long time and you should come in and meet them no matter what."

But at one point, Lee said Wang tried to force his way in using his keys and frightened the kids into crying when he banged on the door forcefully.

On viewing the CCTV footage, Lee said she was shocked to discover a third man, whom she had never met before, standing behind them.

"You shared with me before that a close staff member of yours has a criminal record in Taiwan and has links to the triads. He is back in Taipei now and asked to meet me yesterday," Lee wrote.

She also countered claims made by Wang's staff that she is suicidal.

"Let me state solemnly that I am healthy physically and mentally," she wrote. "I have no suicidal thoughts as I have three children and have plans to contribute to society in future. It is not suicide if anything happens to me."

Wang's agency reacted to Lee's post later and told the media that one of the two men who accompanied him has been an aide for the couple for 12 years, while the other man is a long-time employee. It added that the third man is a bodyguard.

The agency also claimed that Lee has let "her imagination run wild" and wondered why she did not call the police if what she said really took place.

The media reported that Wang did not go to the apartment alone on the advice of his lawyer, who said he should meet his children in the company of a third person. It was understood that the singer did not meet them in the end.

Lee wrote another post on Wednesday morning, rebutting him on eight points.

"We have been married for only eight years, so how did we have an assistant for 12 years?" she asked.

"Everyone knows he is your personal assistant who is employed by you and obeys you."

She said she has called the police over the matter, adding that she has evidence, which she is willing to post. – The Straits Times/Asia News Network

Chris Rock jokes about Will Smith's Oscars slap: ‘Got most of my hearing back’
Amber Heard feared she 'wouldn't survive' if she stayed with Johnny Depp
Amber Heard says Johnny Depp slammed her against a wall on their honeymoon on the Orient Express
Chinese actress Yang Mi, who's worth RM3bil, welcomes gold diggers to woo her as she is rich enough
'Saturday Night Live' spoofs Johnny Depp, Amber Heard trial
American rapper Lil Keed, known for ‘Nameless’ and ‘Snake', dies at 24
'Top Gun' gets 'evolution' in sequel 36 years on, says Tom Cruise.
Ukrainian band Kalush Orchestra wins Eurovision, releases new war video
Star of ‘The Bear Whisperer’ accused of illegal bear kill
HK actor Shawn Yue has panic attack on New York flight: 'I can't take it. I am dying'