Spanish actor Pedro Alonso poses during a photocall for the presentation of the last part of the fifth season of the Spanish TV show 'Money Heist' at the Palacio Vistalegre arena in Madrid on Nov 30, 2021. Photo: AFP

As part of an unprecedented day full of Money Heist themed activities hosted by Netflix on Tuesday (Nov 30), core cast members reunited for a massive live question and answer session from the Palacio Vistalegre in the south of Madrid, with more than 5,000 fans in attendance.

There, Pedro Alonso (Berlin) enthusiastically announced that although Money Heist, or La Casa de Papel in Spanish, is coming to an end in three days time, the universe created by Alex Pina for Atresmedia five years ago will be back, only in a new form as the origin story of one of the show's most popular characters, Berlin. The show is scheduled to arrive on the platform in 2023.

"It is a memorable moment because it is the end of one cycle and the beginning of another," Alonso said at the fan event. "Today I was talking to Jesus Colmenar and we were saying that now we walk into the unknown, open to whatever happens and without expectations.

"I know that these people will give the series every possible twist and turn," he said, indicating towards the group of Money Heist screenwriters at the event. "The responsibility (of spinning off such a popular series) can be a burden and a prison, I hope we continue to have the courage to use this wonderful energy to risk everything again," he added.

News of a Berlin-themed spinoff is likely to thrill many, he's among the series most popular characters despite dying early in the show's run, and equally likely to inspire anger in others. While charismatic, clever, funny and attractive in many scenes, Berlin is also misogynistic, violent and undeniably a sexual predator. In one of the show's most difficult scenes for viewers, he had sex with a female hostage under extreme duress, and arguing the act was consensual takes some intense mental gymnastics. Many viewers will never forgive the character for that violation.

In fact, Alonso himself and series creator Alex Pina both publicly described the character as deplorable, misogynistic, racist, and a sometimes-psychopath in the last year's Netflix documentary Money Heist: The Phenomenon.

La Casa de Papel will launch its last five episodes on Dec 3. Netflix stressed, just before Squid Games was launched worldwide, that the series was its most-watched non-English-language drama until that point and had been seen by 180 million households worldwide.

Set at first in Madrid and eventually in spots all around the world, La Casa de Papel revolves around a ragtag group of misfits who decide to break into the Spanish mint to print and then steal millions of Euros in untraceable cash. The crime would be far from victimless, but as far as major heists go, this one held the moral high ground over most as the group was, in The Professor's own words, not stealing from anybody, making the cast of characters that much more likeable.

The series' success well beyond Spain and Europe's borders was an early signal to Netflix that going deep on local language strategy would pay dividends in the long run.

As the evening wrapped, a surprise audition tape for a hypothetical future English adaptation was screened featuring Ed Sheeran, who expressed his desire to play The Professor. Following a brief performance of Money Heist themed Sheeran remixes, a choir took the stage for a rousing rendition of Bella Ciao, before several minutes of the first episode of Part 5 Volume 2 were streamed. – Reuters 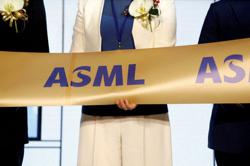