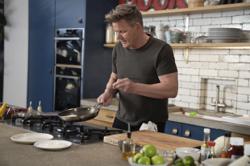 Gordon Ramsay says because of the pandemic he could spend time with his daughter. Photo: AFP

Many would know Gordon Ramsay for his fiery temper and frequent use of profanity from his reality television cooking show, Hell's Kitchen. However, the celebrity chef is different when it comes to family.

In a recent interview with Daily Mail, Ramsay and his wife Tana opened up about their daughter, Holly's past traumatic experience with sexual assault when she was 18. They had praised her for speaking up about what she had gone through and for being strong during the time.

Holly first opened up about her experience on May 25 during the first episode of her mental health podcast called 21 & Over alongside her co-host, psychotherapist Talitha Fosh. Holly shared that the incidents happened when she was at London's Ravensbourne University studying fashion.

When asked about his daughter, the 54-year-old chef said: "Holly has had a very difficult time. Now she is in an amazing position and she has dealt with those issues.”

He further explained that he was grateful for being able to spend more time with his family during the pandemic.

"The pandemic, from a dad’s point of view, was perfect timing because we got to spend quality time together and we got to understand what she’s gone through. She’s absolutely fine now, there was a healing process," Ramsay said.

Holly had left university following the incidents and was admitted to a mental health facility for three months. She was diagnosed with with PTSD, anxiety, and depression at the facility.

"My family has been an amazing support. It's brought me closer to them in many ways," she had previously added during her podcast.