Taeyang of K-pop group BigBang and actress Min Hyo-rin are about to become parents. Photos: Instagram

Taeyang of K-pop group BigBang and actress Min Hyo-rin are about to become parents.

Min's agency confirmed her pregnancy after a Korean newspaper reported the news on Monday (Sept 27).

According to news portal soompi, the agency stated: “It is true that Min Hyo-rin is expecting. She is waiting joyfully.”

“As she hopes to give birth quietly, we ask for your understanding in not being able to respond to further questions.”

Hence, there is no information on when Min is scheduled to give birth or how far she is with her pregnancy.

The 35-year-old actress met the 33-year-old pop star – whose real name is Dong Young-bae – in 2014 when she starred in his music video for the song 1AM.

They confirmed they were in a relationship the following year and got married in February 2018. 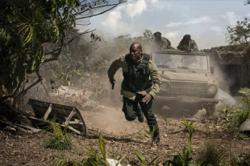