Eizlan Yusof (pic) and Hans Isaac failed to settle the case through the mediation process. Photo: The Star

The suit filed by actor and director Datuk Seri Eizlan Yusof against Datuk Hans Isaac in relation to allegations of abuse of power to obtain funds for a production company, Excellent Pictures Sdn Bhd (EPSB), will go to trial.

Eizlan’s lawyer, Datuk Shaharudin Ali, said the court decided the matter as both parties failed to settle the case through the mediation process.

All parties are required to file all relevant documents relating to the pre-trial by Oct 18, he said, adding that the court had yet to set the trial dates but the case management had been fixed to be conducted through Zoom before Judge Datuk Azimah Omar at 11 am on Oct 28.

He told this to Bernama when contacted after the case management today, which was held via Zoom before High Court deputy registrar Ong Yen Li.

In the statement of claim, which was last Feb 8, Eizlan, 50, whose real name is Idris Md Yusof, claimed that on Nov 16, 2020, at 9.13pm, Hans Isaac had written, published and posted a defamatory statement to the Malaysian Film Producers Association group chat and then shared to other social media platforms.

The association has 200 members, including the plaintiff and defendant.

Eizlan claimed that the defamatory statement, among others, insinuated that he took advantage of his position as Malaysian National Film Development Corporation (Finas) board member to illegally obtain financial assistance from the government for EPSB, while he had nothing to do with the company in any capacity and action.

He claimed the remarks by Hans Isaac had caused him to lose his dignity, and be insulted and shunned by the general public.

Eizlan is seeking, among others, RM2mil in general damages, as well as aggravated and exemplary damages, interest and costs, apart from demanding that the defendant issue an apology.

Hans Isaac, in his statement of defence filed on March 17, said that the claim by the plaintiff that he had nothing to do with EPSB was not true.

He said although Eizlan did not hold any post or shares in EPSB, he had acted in films and drama series produced by the company.

The statement was to the WhatsApp group, which is a closed group and any information or anything circulated outside the chat group is the responsibility of the group admins, he added. – Bernama 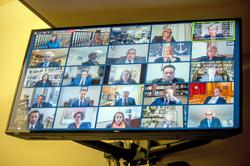 WATCH: Permission To Dance? BTS sings its way through United Nations
Malaysian influencer Zoey Phoon cast as an extra in 'Sex Education' Season 3
HK star Nicholas Tse earns RM30mil in less than a year through stock investments
Blackpink's Rose must have a bowl of rice before any important event
Soviet chess legend sues Netflix for 'sexist' line in 'Queen's Gambit'
TV host RuPaul breaks record for the most Emmy wins by a person of colour
Comedian Chris Rock reveals he has Covid; urges people to get vaccinated
From 'The Mandalorian' to Michael K. Williams, the Emmys ignored a great year of genre TV
TV series 'The Crown,' 'Ted Lasso', 'Mare Of Easttown' win top Emmy Awards
Singer Adele shows off new body and new boyfriend in latest Instagram post