Kim Jong-kook and Song Ji-hyo talk about exercising, dieting and more in the video. Photo: YouTube

Running Man stars Kim Jong-kook and Song Ji-hyo got together for Kim’s YouTube channel, Gym Jong Kook, and their friendship just shines through in the almost 12-minute video.

Korean actress Song – who says she doesn’t exercise – tells why she is Kim’s guest: “To learn how to get off the sofa.”

She also mentions that she’s gained weight recently: “Personally, I find diets really challenging because I like food.”

This video that Kim posted on July 8 is only the first part, in which the two colleagues have a casual conversation about exercising, dieting and ideal body types.

He informs her: “You need to find a body goal that you can achieve with your will.”

However, throughout the video, Song is seen getting easily distracted ... especially by the smell of food being prepared for the two of them.

When she is served the food, she gets busy eating and doesn’t listen to what Kim has to say.

In the end, Kim tells Song to start her own YouTube channel. “You’re way funnier than when you’re filming Running Man,” he says.

At the end of the video, we are informed there would be another video next week of Song doing the exercises Kim has prepared for her.

The exercise enthusiast said he started the channel to share a variety of content, with the main subject being exercising of course.

This particular video has over five million views already. 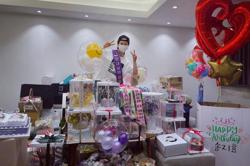