Ben Affleck and J.Lo officially split up in January 2004, but remained friends. Photos: AFP and AP

Former Hollywood power couple Jennifer Lopez and Ben Affleck - famously known as Bennifer before they broke off their engagement in 2004 - appear to have rekindled their romance.

They were spotted last week at an exclusive ski resort in Big Sky, Montana, where they had spent the week, before taking his private jet back to Los Angeles last Saturday (May 8).

An anonymous source told entertainment magazine People: "(Jennifer) spent several days with Ben out of town. They have a strong connection. It's all been quick and intense, but Jennifer is happy."

Even before the romantic getaway, the two exes had been seen together in recent weeks after her break-up from former baseball star Alex Rodriguez in April and the actor had been spending time at her Los Angeles mansion.

One of the biggest celebrity couples at the time, Lopez, 51, and Affleck, 48, were engaged in 2002 and starred together in romance comedy Gigli (2003).

He even appeared in her music video for the hit song Jenny From The Block in 2002, while she had a minor role in his movie Jersey Girl (2004).

Just days before their 2003 wedding, they postponed it, citing the intense scrutiny they faced.

They officially split up in January 2004, but remained friends.

Singer-actress Lopez went on to marry singer Marc Anthony in 2004, with whom she has a pair of twins. They divorced after 10 years in 2014.

Oscar-winning actor Affleck moved on to actress Jennifer Garner, whom he married in 2005. They divorced in 2018 after having three kids together.

Most recently, he dated and broke up with actress Ana de Armas earlier this year.

Last month, Affleck spoke about Lopez when she appeared on the cover of InStyle magazine's May Beauty Issue.

Lopez later told the magazine: "I don't have any [BEAUTY] secrets except JLo Beauty - and I'm giving them all to everyone with every product. Ben is funny! He still looks pretty good too."

In a 2016 interview with People magazine, Lopez had opened up about their relationship: "I think different time different thing, who knows what could've happened, but there was a genuine love there."

An anonymous source, who spoke to entertainment website E! Online after the news of their ski trip broke, said: "She wants to give it a shot with Ben. They never really had closure and she has always wondered what could have been. The timing was never right and they were in different places until now." – The Straits Times/Asia News Network

J.Lo was the one to end engagement over ‘too many issues’: report 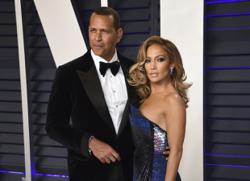