J.Lo was the one to end engagement over ‘too many issues’: report

Jennifer Lopez 'insisted on it' a source told People magazine of the split with Alex Rodriguez, citing 'too many issues that are unresolved'. Photo: AP

Someone is getting loud about J-Rod’s split.

Jennifer Lopez was the one who ended the engagement between herself and former Yankee Alex Rodriguez, a friend of the Let's Get Loud singer told People in a story out Wednesday (April 21).

Lopez, 51, “insisted on it,” the source said of the split, citing “too many issues that are unresolved”.

Ultimately, the performer “has been pretty miserable” and was unable to fully “trust” Rodriguez, 45, who had flown to visit her in the Dominican Republic where she’s been filming Shotgun Wedding to try to patch things up, People notes.

The visit came after the former couple acknowledged in mid-March that they were working through issues.

Lopez “didn’t think it was in her best interests to stay with Alex,” the insider told People.

Another source told the outlet that the pair “liked spending more time together as a family, but it was difficult to keep that special spark when they saw each other every day” amid coronavirus lockdowns, which intensified issues between the two.

Once Lopez left for filming, the rumour mill picked up on the former baseball star’s alleged wandering eye.

“Whether or not he has cheated doesn’t matter,” a music insider told People, noting Lopez “won’t tolerate the fear of it in the air between them.”

Now, the actress’ pal says the former couple is “especially sad for the kids since they are all so close”.

The superstar though “is not one to sit around and cry,” according to her friend, who says Lopez “is doing well”. – New York Daily News/Tribune News Service 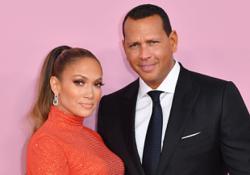