With homebound nominees appearing by remote video and hosts Tina Fey and Amy Poehler on different sides of the country, a very socially distanced 78th Golden Globe Awards trudged on in the midst of the pandemic and a storm of criticism.

Netflix, which came in with a commanding 42 nominations, won the top TV awards.

Schitt's Creek, which had gone unnominated in the top category every previous season at the Globes, won best comedy series for its final season.

They were among many of the evening's awards to go to streaming services, which – facing scant traditional studio competition – dominated the Globes like never before. 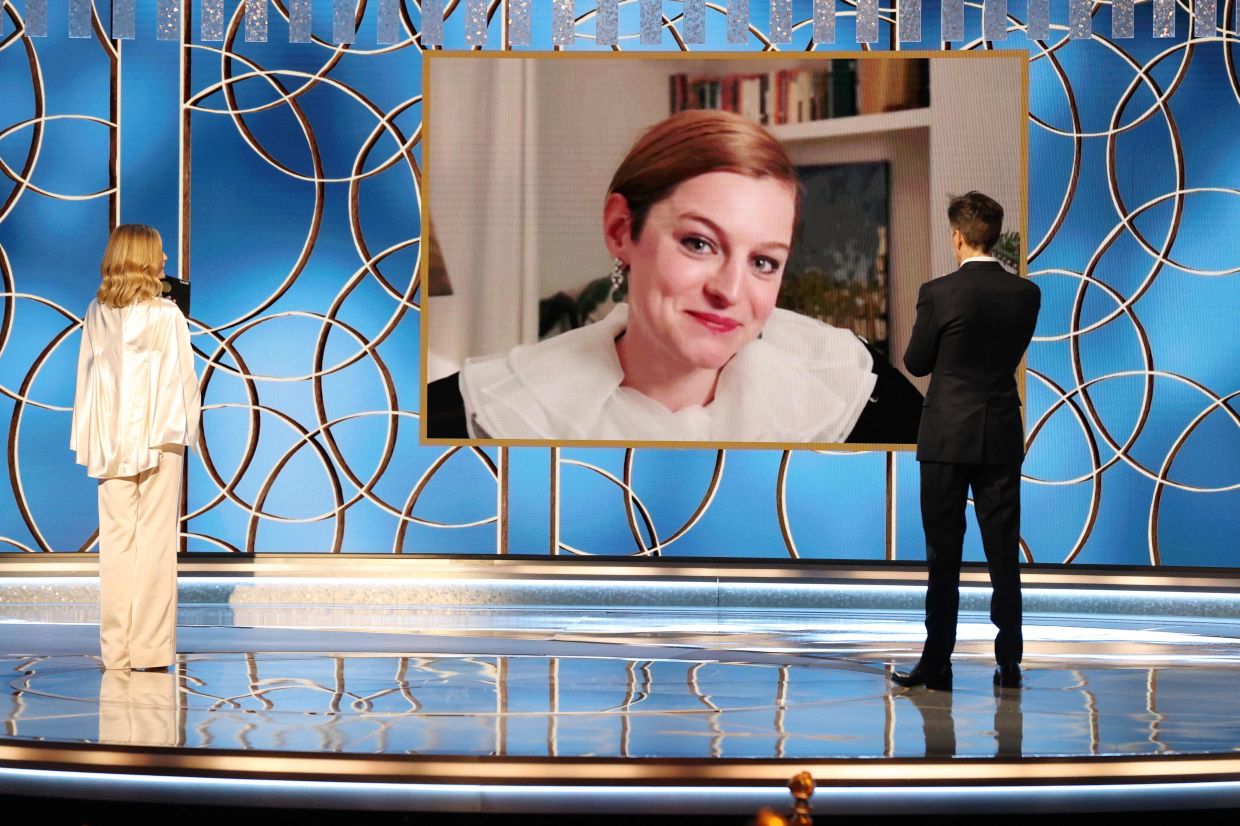 Emma Corrin (on screen) accepting the Best Television Actress - Drama Series award for "The Crown" via video from Kyra Sedgwick and Kevin Bacon.

Fey took the stage at New York's Rainbow Room while Poehler remained at the Globes' usual home at the Beverly Hilton.

In their opening remarks, they managed their typically well-timed back-and-forth despite being almost 3,000 miles from each other.

"I always knew my career would end with me wandering around the Rainbow Room pretending to talk to Amy," said Fey. "I just thought it would be later.”

They appeared before masked attendees but no stars.

Instead, the sparse tables – where Hollywood royalty are usually crammed together and plied with alcohol during the show – were occupied by "smoking-hot first responders and essential workers, ” as Fey said.

In a production nightmare but one that's become familiar during the pandemic, the night's first winner accepted his award while muted. 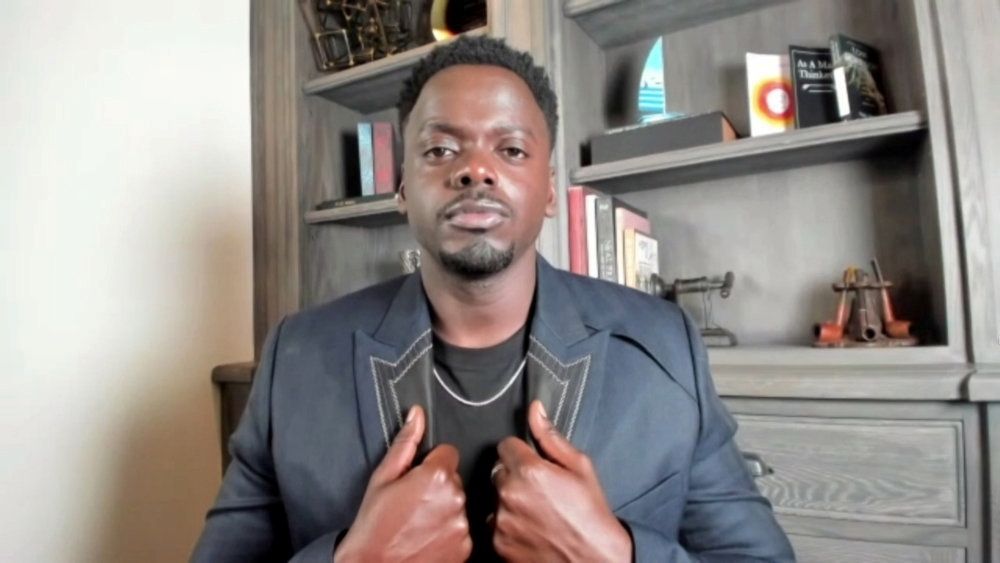 Daniel Kaluuya wins the Best Supporting Actor for "Judas and the Black Messiah".

Only after presenter Laura Dern apologised for the technical difficulties did Daniel Kaluuya, who won best supporting actor for his performance as Black Panther leader Fred Hampton in Judas and the Black Messiah, get his speech in.

When he finally came through, he waged his finger at the camera and said,"You're doing me dirty!"

Pandemic improvising was only part of the damage control for the Hollywood Foreign Press Association, which puts on the Globes.

After The Los Angeles Times revealed that there are no Black members in the 87-person voting body of the HFPA, the press association – which Ricky Gervais last year called "very, very racist” in his opening monologue – came under mounting pressure to overhaul itself and better reflect the industry it holds sway in.

This year, none of the most acclaimed Black-led films – Ma Rainey’s Black Bottom, One Night in Miami, Judas and the Black Messiah, Da 5 Bloods – were nominated for the Globes’ best picture award.

With the HFPA potentially fighting for its Hollywood life, Sunday's Globes were part apology tour.

Fey and Poehler started in quickly on the issue.

"Look, a lot of flashy garbage got nominated but that happens, ” said Poehler. "That’s like their thing. But a number of Black actors and Black-led projects were overlooked.”

Within the first half hour of the NBC telecast, members of the press association also appeared on stage to pledge change.

"We recognise we have our own work to do," said vice president Helen Hoehne. "We must have Black journalists in our organisation.” 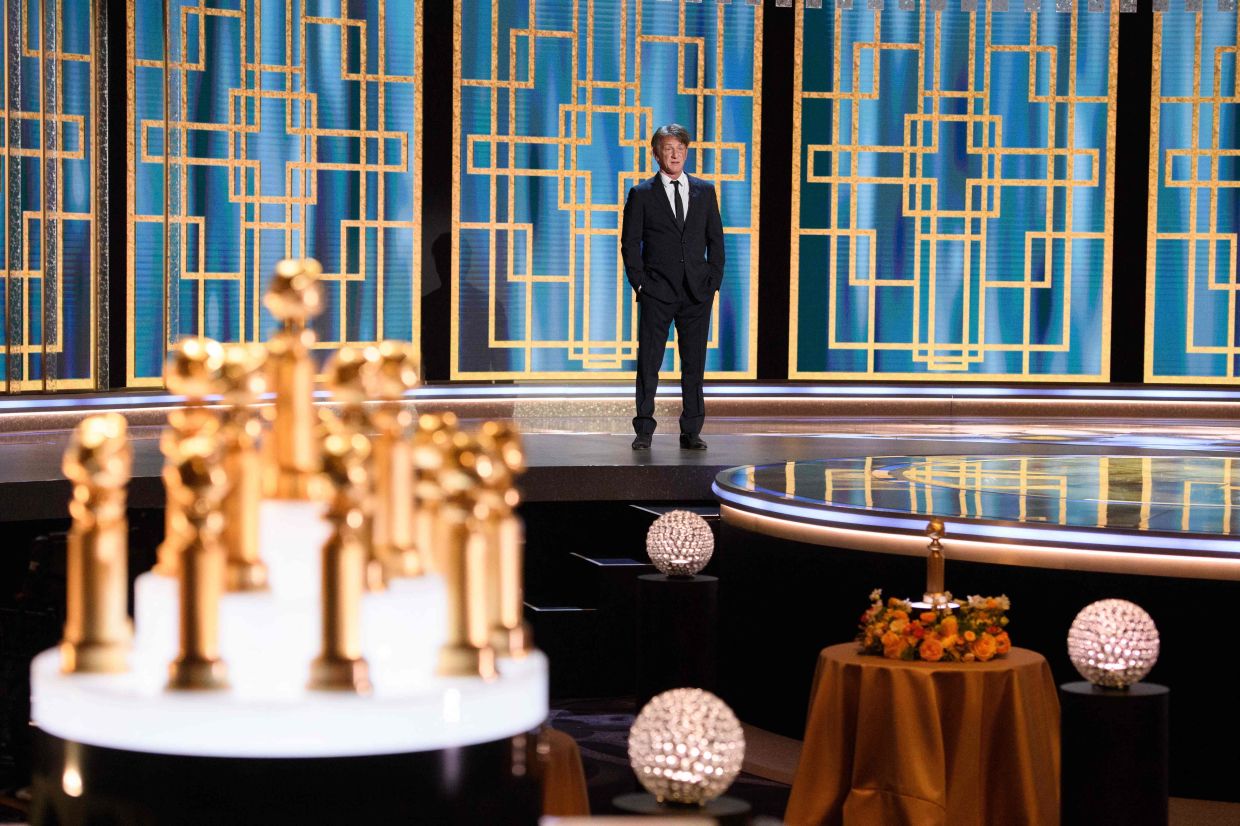 The show, postponed two months from its usual early-January perch, promised little of the glamour that makes the Globes one of the frothiest and glitziest events of the year.

Due to the pandemic, there was no parade of stars down the red carpet outside the Beverly Hilton.

When attendees would normally be streaming down the red carpet on Sunday evening, many stars were instead posing virtually.

Regina King, resplendent in a dazzling dress, stood before her yawning dog.

Carey Mulligan, nominated for Promising Young Woman, said from a London hotel room that she was wearing heels for the first time in more than a year.

The circumstances led to some award-show anomalies.

Mark Ruffalo, appearing remotely, won best actor in a limited series for I Know This Much Is True with his kids celebrating behind him and his wife, Sunrise Coigney, sitting alongside. Lee Isaac Chung, writer-director of the tender Korean-American family drama Minari (a movie the HFPA was criticised for ruling ineligible for its top award because of its non-English dialogue), accepted the award for best foreign language film while his young daughter embraced him.

John Boyega, supporting actor winner for his performance in Steve McQueen's Small Axe anthology, raised his leg to show he was wearing track pants below his more elegant white jacket.

Bob Odenkirk, while appearing on five screens with fellow TV actor nominees before an ad break, took the moment to meet a legend, virtually. 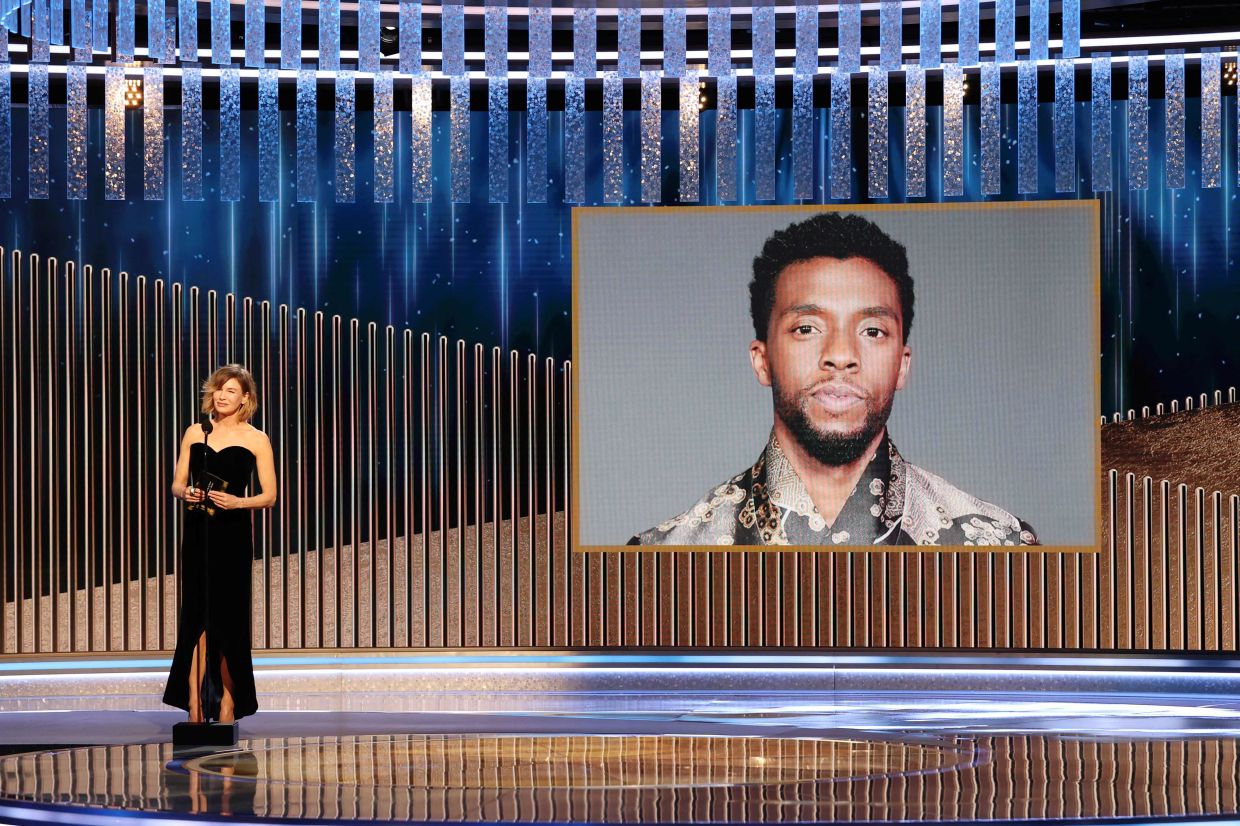 Some speeches were pre-taped. The previously recorded speeches by Jon Batiste, Trent Reznor and Atticus Ross for the wining Soul score went without hiccup even though presenter Tracy Morgan first announced "Sal" as the winner.

Other awards included Pixar's Soul for best animated film; Rosumund Pike took best actress in a comedy or musical film for I Care a Lot; and Aaron Sorkin (Trial of the Chicago 7) for best screenplay.

The film, a favourite to win best drama film at the Globes, was sold to Netflix by Paramount Pictures last summer due to the pandemic. "Netflix saved our lives, ” said Sorkin.

As showtime neared, the backlash over the HFPA threatened to overwhelm the Globes.

Yet the Globes have persisted because of their popularity (the show ranks as the third most-watched award show, after the Oscars and Grammys), their profitability and because they serve as important marketing material for contending films and Oscar hopefuls.

That may be especially true this year when the pandemic has upset the normal rhythms of buzz in a virtual awards season lacking the usual frenzy.

The Globes are happening on the original date of the Academy Awards, which are instead to be held April 25. – AP 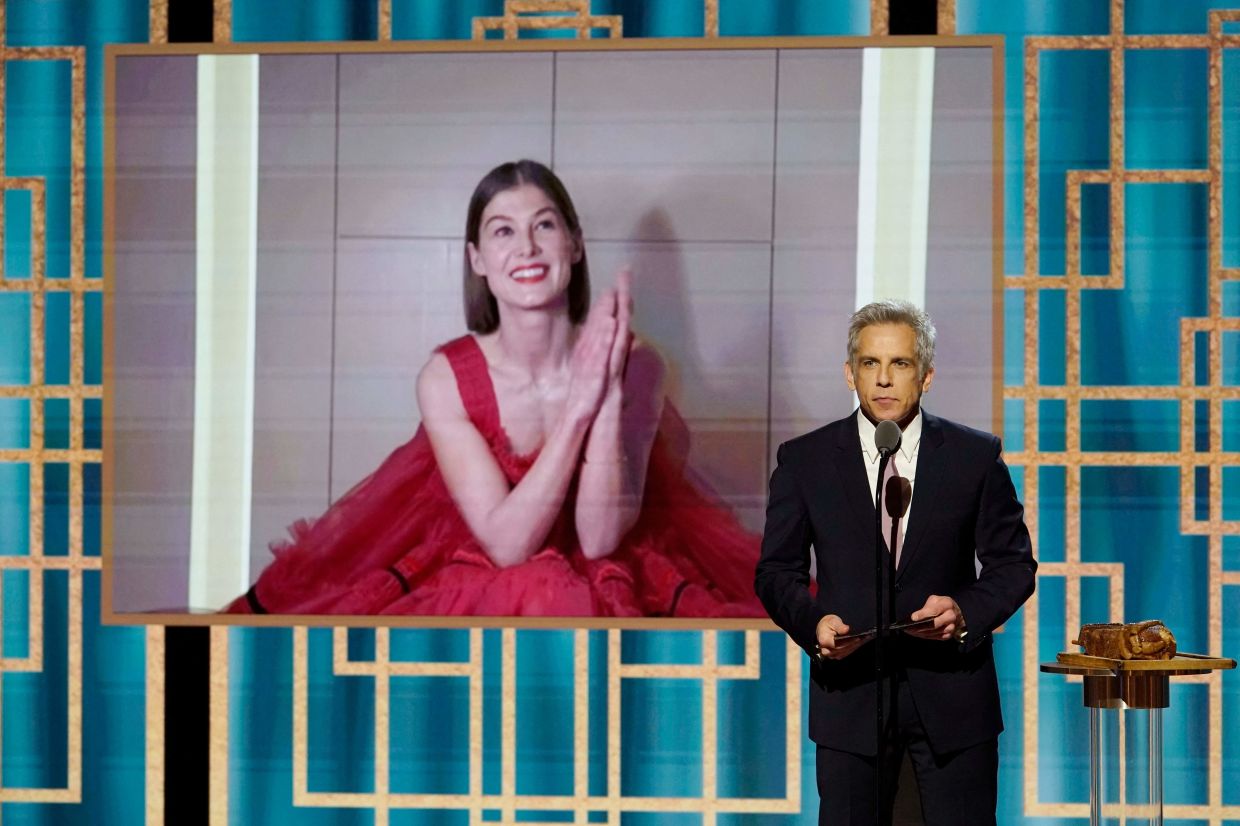 Here's the complete list of the 78th Golden Globe winners:

Best Performance by an Actress in a Motion Picture, Drama: Andra Day, The United States Vs. Billie Holiday 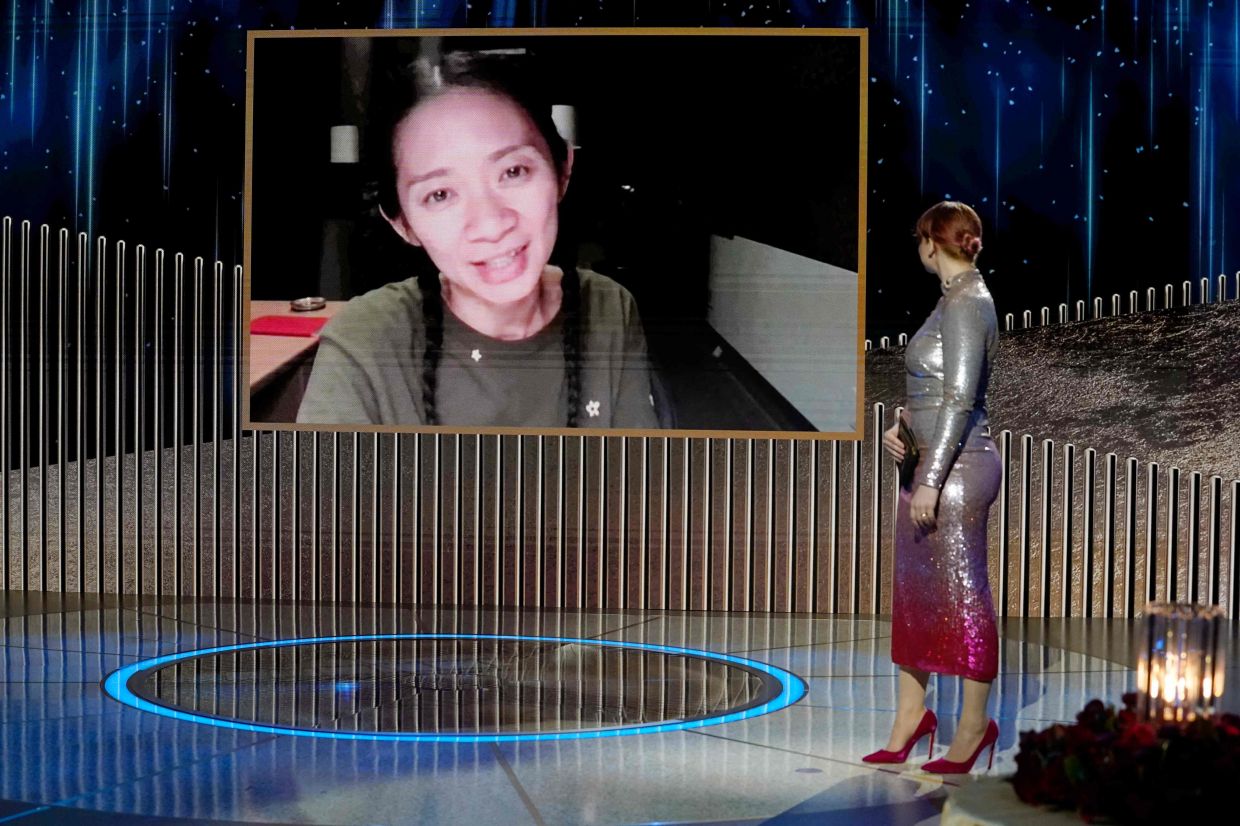 Best Performance by an Actress in a Motion Picture, Musical or Comedy: Rosamund Pike, I Care A Lot Best Performance by an Actor, Limited Series, Anthology Series or Motion Picture made for Television: Mark Ruffalo, I Know This Much Is True

Best Performance by an Actress, Limited Series, Anthology Series or a Motion Picture made for Television: Anya Taylor-Joy, The Queen’s Gambit

Best Performance by an Actor in a Television Series, Drama: Josh O’Connor, The Crown

Best Performance by an Actress in a Television Series, Drama: Emma Corrin, The Crown 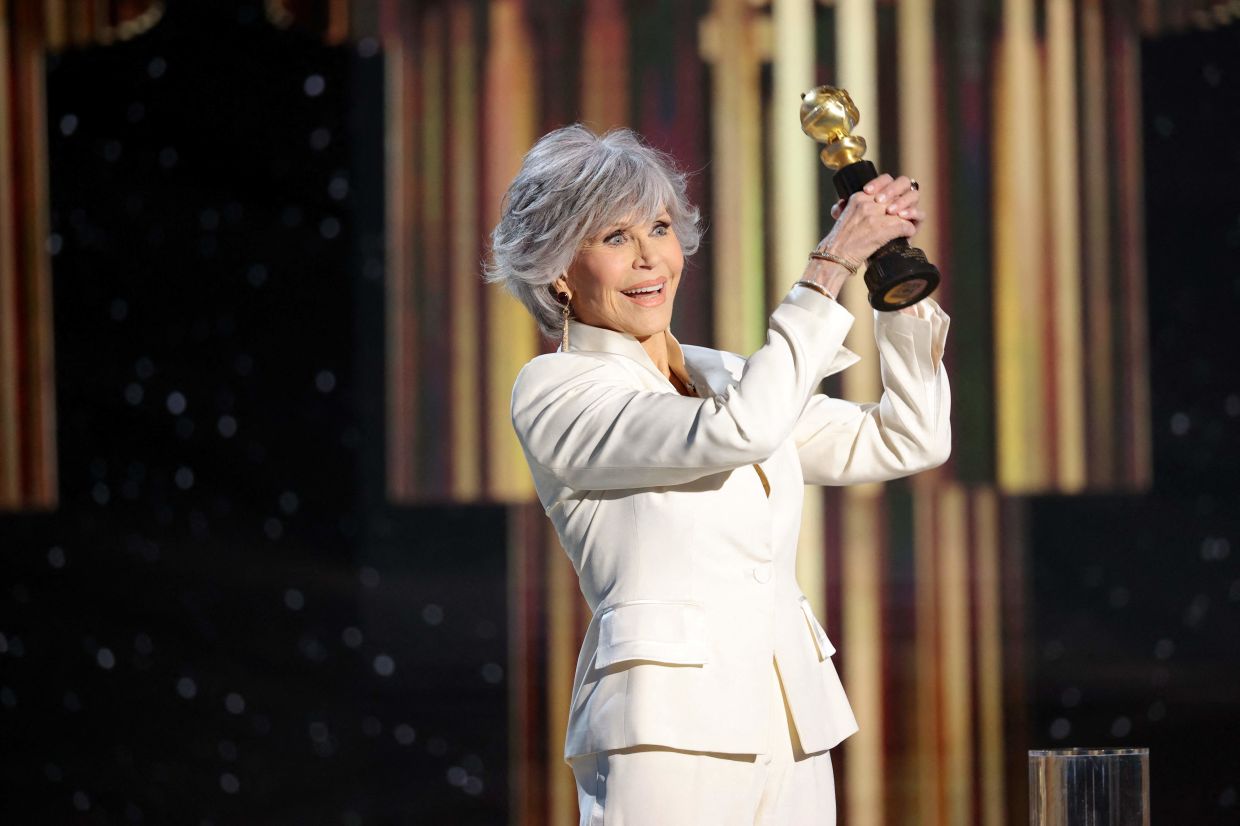