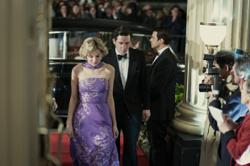 Both men, though generally incapable of expressing emotion in anything resembling a human way, are fiercely grieving the untimely death of Dickie Mountbatten (Charles Dance), a stable figure who meant a great deal to them both in the absence of their own fathers showing them any real affection.

After three seasons of watching these dynamics calcify, the audience understands all this perfectly well. But in this moment, as in so many moments, The Crown takes the time to underline its point over, and over, again.

Philip, drunk and angry, informs his son that Mountbatten's will asks for Charles, not Philip, to give his eulogy. Squinting at Charles with nothing short of pure disdain, he makes even plainer why he's so drunk and angry, though Charles already knows.

"I barely knew my own father," he says. "Dickie understood that and stepped in as a surrogate, which meant the world to me." Then, he continues, Mountbatten "switched horses and started caring for you."

To make his meaning clearer, he repeats: "I was no longer the priority." And then, just in case you'd blacked out for the last thirty seconds (and maybe Philip did), once again: "He replaced me as father to you."

He takes a couple steps forward, claps a firm hand on Charles' shoulder, and fires one final shot: "You replaced me as son to him."

This scene probably won't get much attention in the grand scheme of things when the fourth season of The Crown hits Netflix on Nov 15.

This installment, more than any other in Peter Morgan's elaborate costume drama, wrings every last drop from its juicy material, especially with the introductions of a young Princess Diana (an uncanny Emma Corrin) and Prime Minister Margaret Thatcher (a gravel-voiced Gillian Anderson, doing the absolute most with the aid of a towering, immovable wig).

As Charles and Diana's marriage crumbles and the distaste between Thatcher and Queen Elizabeth II (Olivia Colman) hardens into hostility, the season practically explodes under the weight of all the tension, in quite un-British fashion.

The Crown audience will have plenty to chew on, especially with other storylines like Princess Margaret (Helena Bonham Carter) discovering a horrifying family secret, Anne (Erin Doherty) quietly suffering through a broken marriage, and Charles stubbornly maintaining an affair with his real love, Camilla Parker-Bowles (Emerald Fennell), as Diana struggles alone at home with loneliness and bulimia.

The season also takes care to introduce Elizabeth's younger sons, Edward (Angus Imrie) and Andrew (Tom Byrne), the latter of whom has been embroiled in controversy given his friendship with the late Jeffrey Epstein (and whose allegedly criminal proclivities The Crown has no problem foreshadowing).

Mountbatten's assassination at the hands of the IRA might have been a historically significant game-changer, but in the world of The Crown, it's dispensed of halfway through an episode before the show gets on with all the domestic intrigue that is its true lifeblood.

These 10 new episodes contain so much backstabbing and incendiary gossip that a scene like Philip and Charles' bleak father-son detente will barely register.

Still, while watching this season, I nonetheless thought of it quite a lot. Beautifully directed by Benjamin Caron, and impeccably acted by Menzies and O'Connor, the scene's genteel sniping and restrained heartbreak make for a briefly devastating interlude before the episode has to move on.

The confrontation is so expertly assembled and presented, in fact, that it takes some time to realize just how basic the script driving it actually is.

Over and over again, the dialogue forces Menzies to highlight what could have remained very effective subtext in such a glaringly obvious way that it becomes downright ridiculous. Besides Princess Diana, the fourth season also sees the introduction of Margaret Thatcher on the show.

Taking a broader view of The Crown, this disparity between the blunt force of Morgan's writing and the subtlety of those acting it out is a consistent feature. (Morgan has occasionally had co-writers, but has otherwise written the vast majority of the series solo.)

There's no relationship or geopolitical event the series can't make more melodramatic, no scathing rebuke it won't underscore again and again. There are actors – like Menzies, Colman and Doherty – who find the tiny cracks in their characters between the lines and make meals out of them.

There are others – like Bonham Carter, O'Connor and now Anderson – who seize their characters' propensity for frankness and rip into their lines with deliciously dramatic readings.

There is so rarely a false note in the star-studded cast of The Crown that the fact of their more lackluster material barely registers.

Take Thatcher and Diana, for instance. This season takes great care to give both ample screen time, outlining their particular relationships to power and the myriad obstacles they faced whilst dealing with the royal family.

Both Anderson and Corrin get spotlight episodes that allow them to flesh out their characters beyond the flat figures many people knew them as throughout their lives, and Corrin especially does admirable work along the way. But the way in which Morgan writes each woman leaves precious little room for nuance.

The show's view of Thatcher makes mention of her infamously harsh policies, and occasionally even tuts disapprovingly at it through Elizabeth's growing frustration. (Colman, largely sidelined for both her seasons atop the throne, doesn't get enough credit for how well her comic timing conveys Elizabeth's inherent pettiness.)

But The Crown is far more interested in exploring Thatcher's work ethic and home life, which could be an interesting approach if it weren't, again, so basic. (I doubt Thatcher worrying about her wayward son directly led her to invade the Falkland Islands, but The Crown, bizarrely, begs to differ.)

And while the show's intimate exploration of Diana's private life will undoubtedly grab attention, the role as written treacherously skirts the edge of "Manic Pixie Princess Girl," with only Corrin there to steer Diana back into more believable territory.

For four seasons now, Morgan has written a remarkably addictive, stealthily silly royal soap opera that only occasionally understands just how obvious it can be.

And yet, complemented with razor-sharp performances and furnished with the most luxurious set design that Netflix money can buy, The Crown has successfully sold itself as one of TV's most serious dramas.

The fourth season, in all its shameless glory, may be its most successful yet even as it puts that prestigious perception to bed. After all, as The Crown reminds us with every dizzying turn of Diana's misfortunes, the royal family's rabid audience will always take high drama over a more human reality. – Variety/Reuters

The fourth season of The Crown premieres Nov 15 on Netflix. 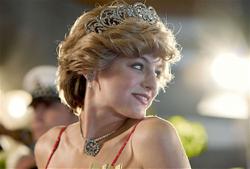