Christy Chung started her career in showbiz after winning the Miss Chinese International Pageant when she was 22. Photos: Christy Chung/Facebook

Call Christy Chung the J.Lo of the East why don't you. Like Jennifer Lopez, Chung has also proven that age is really nothing but a number.

Chung, who celebrated her 50th birthday yesterday (Sept 19), can put those younger than her to shame with her age-defying looks and curvy body. On social media as well as her appearance on a recent reality show in China, Chung has made fans sit up and ask, What is the secret to her good looks?

In a new interview with South China Morning Post, the Chinese beauty says maintaining a healthy diet, getting a good night’s sleep, not drinking alcohol and feeling young at heart are some of the secrets to looking fab at 50.

Chung knows processed sugar is the enemy which is why she replaces white sugar with honey and coconut sugar in her house. She also adopts a mostly vegetarian diet and eats minimal starch. "I consume more protein powder to make up for the lack of meat," she tells SCMP.

“I eat fruits in the morning and prefer low-sugar fruit like blueberries, strawberries and grapefruit to the sugar-laden ones like mangoes, watermelons, pineapples and peaches," she adds.

Chung also recommends yoghurt intake to increase the probiotics in the digestive systems as well as food such as garlic, red ginseng and spring onion which are high in antioxidants to boost the immune system. Chung, who is of Chinese and Vietnamese parentage, believes in intermittent fasting where she only allows herself to eat within an eight-hour window a day.

“Eating throughout the day will subject your digestive system to frequent work, which is not good for the stomach, ” Chung says.

Chung works out almost daily. Even when she's travelling for work, the actress takes along a portable trampoline just so she can enjoy her daily jumping ritual. Other exercises she loves include dancing, skiing, yoga, tai chi and Tabata.

“I have exercised since when I was young and living in Canada. I played sports with boys all the time," says Chung who is currently married to Chinese actor Shawn Zhang, 38. Christy Chung is married to Chinese actor, Shawn Zhang. This is her third marriage. She has three children - Yasmine, 22, from her first marriage; and Cayla, 9 and Jaden, 11 – from her second marriage.

Apart from staying active and adhering to a healthy diet, Chung believes that keeping a positive, upbeat attitude is important as well.

Chung tells SCMP: "I reduce stress by playing with my kids and pets, having massages, and having seaside chats with my friends in person. We must never bottle up unhappy feelings. It’s also important to be grateful for what we have so we won’t feel greedy and lacking.”

Chung has three daughters – Yasmine, 22, from her first marriage; and Cayla, 9 and Jaden, 11, from her second marriage.

The Canada-born adds: “I won the Miss Chinese International Pageant at the age of 22. I was at my prettiest then. So my mental state will always be (the same as) when I was 22 years old." 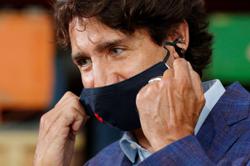