'Umbrella Academy' is at it again in S2, bickering and stopping an apocalypse ... it's all good

The Hargreeves siblings are ready to vogue. Someone hit play.

In the final scene of The Umbrella Academy’s first season, the Hargreeves siblings agreed to use their brother’s ability to time-travel and escape the end of the world together. What’s the worst that could happen, they asked.

Well, while they do get out of being vaporised from the face of an exploding Earth in 2019, they – to borrow one character's explanation – have brought the apocalypse with them to the 1960s, the era they time-jumped to. 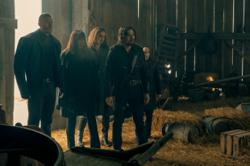 Listen: Cast of 'The Umbrella Academy' on their favourite storyline in S2