Celebrity couple Samantha Ko and Tang Chi Wai were reported to have split up in February. Ko is a TVB actress who has acted in shows such as Come Home Love and My Unfair Lady, while Tang is a singer-songwriter.

The initial split was a quiet affair, with both sides refraining from providing a reason for the breakup. They dated for five years.

But now it seems that the couple broke up because Tang, 43, was cheating on Ko, 33. On June 2, news outlet HK01 wrote that it had reached out to a woman, Miss S, who was having an affair with Tang. Miss S told reporters that she met Tang at a concert in March 2019. The pair dated for 10 months before Tang broke things off.

On the same day, Tang reached out to the media to clarify that he had indeed been involved in a “love dispute” with Miss S. However, the musician claimed that he and Miss S were never in an official relationship.

Tang said that Miss S had persistently harassed him on social media, threatening to spread rumours about him to his colleagues, friends and family. He said that he had taken legal action against Miss S in late February.

However, Miss S came with receipts; she was able to provide screenshots of text messages between herself and Tang which showed that the pair were involved romantically.

In the texts, Tang could also be seen denying that he was in a relationship with Ko.

Miss S told HK01 that Tang was constantly paranoid of their affair becoming exposed. She said that he would not take any photos with her, and would threaten her into silence if he believed she was compromising their privacy.

“He (Tang) has always been afraid that I’ll say something to the reporters. He was very careful when he was with me, but I didn’t expect him throw me under the bus like that.

“He took preemptive measures and called the police on me, saying that I was the one threatening him!” she said.

Miss S added that she is coming forward with the truth now as she felt wronged by Tang. 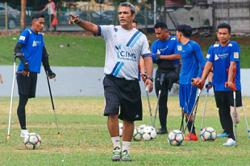