As a production coordinator on blockbusters like 'Star Wars: The Rise Of Skywalker', Malaysian Eng Sze Jia’s job is to make sure all the moving parts come together.

Have you ever wondered how many people it takes to make a movie like Star Wars: The Rise Of Skywalker?

Well, the next time you watch a movie, don’t just get up and walk out the minute the credits start rolling. How about sitting through them instead?

Making a movie involves many moving parts, and hundreds, if not thousands of people working together. Malaysian Eng Sze Jia, 31, is one of the people with the task of helping all those parts stay on course and come together perfectly in the end.

As a production coordinator with Industrial Light & Magic in Singapore, Eng is in charge of planning and executing schedules for several departments within a certain project.

According to her, at the peak of a project like The Rise Of Skywalker (TROS), there was about 200-300 people in Singapore working on the film.

“There’s a team of us misfits trying to keep everything together, ” she explained with a laugh.

“What we do is organise, try to plan the production and make sure that for the next six, seven weeks, these are the targets we will hit. We then rejig our schedule to match that milestone and feedback any info back to the boss.”

Eng began her career as a production coordinator with now-defunct Malaysian VFX company Rhythm and Hues, which was lauded for its work on Ang Lee’s Life Of Pi in 2012.

She then spent two years in Singaporean company Double Negative before moving to ILM in September 2015. There, she has been involved in global blockbusters such as Teenage Mutant Ninja Turtles 2: Out Of The Shadows (2016), Warcraft (2016), Rogue One: A Star Wars Story (2016), Ready Player One, Avengers: Infinity War and Aquaman (2018), and Aladdin (2019).

Eng has been a production coordinator on several blockbusters, including Star Wars: The Rise Of Skywalker.

For someone who works so closely with animators, it is somewhat surprising to find out that she claims that she “can’t draw to save her life”. So how did she get into working at an animation studio then?

“Growing up, I always found animation to be very imaginative and creative as a medium of storytelling. It doesn’t limit you to what can be shot. As a kid, when watching a film, I was always asking about how they made it and how they filmed it, ” Eng recalled.

“It was my childhood wish to become an animator, but at the end of the day I didn’t choose it.

“When I was at that crossroads between studying arts and journalism, I went with journalism instead and that’s how I got into film. So, you could say I hit two birds with one stone!”

For her, working on a Star Wars film had been one of her ambitions since joining the industry.

“The first Star Wars movie I watched was Episode I (The Phantom Menace) when I was 13 years old. At that age, it wasn’t something I related to strongly, but I love watching how it has evolved and the cult following it has now.

“So, working on Rogue One was a tick off my bucket list – to work on a Star Wars film, ” she said, adding that the work on TROS was much more complex, and larger scale compared to Rogue One.

So, what is the best part of her job as a production coordinator?

“Seriously, I think the best part of my job is watching all our talents piece a project together and bringing the impossible to life. Being a part of the production team that supports that is a privilege.

“From the day I set foot in this industry, I’ve never felt alone because I’ve been lucky to cross paths with so many inspiring creatives and mentors who eventually become lifelong friends.”

For Eng, the best part of the job is watching every moving part come together to form one complete film.

“That’s my favourite part – watching everything come together. Every film has its own set of challenges, and when you see everyone in every department coming together and delivering the best visuals, that really is the greatest feeling.” 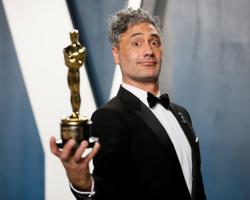 Use the Force – or free Star Wars wallpapers – in video calls