Franks Jr, flanked by Tan (left) and Teng, is the subject of 'St. Louis Superman'. The short documentary follows his journey from activist and rapper to state representative. Photos: Handout

The idea that their documentary St. Louis Superman would make it to the top 10 shortlist for Best Documentary (Short Subject) at the 2020 Oscars - out of a pool of 96 short documentaries considered - never crossed their minds.

“Never did we think that our short documentary would come this far, ” says 35-year-old Teng, who produced St. Louis Superman with Tan, in an e-mail interview with StarLifestyle.

“Our intent was to learn from our subject, Bruce Franks Jr, and to make sure we tell a story that is true and fair to him and those affected by gun violence and systemic discrimination from the state.”

The 25-minute-long documentary, directed by Smriti Mundhra and Sami Khan, chronicles the journey of Franks Jr, an activist and rapper who ran for the Missouri House Of Representatives in 2016 and won.

He was inspired to enter politics after the shooting of an unarmed African-American teenager, Michael Brown Jr., by a white police officer in 2014 at Ferguson, Missouri, near where Franks lived.

The project began when Teng, who is a commissioner and senior producer for Al Jazeera English’s Witness, reached out to Smriti after being so impressed by her work in the 2017 feature documentary, A Suitable Girl, about arranged marriages in India.

“She wrote back immediately and started pitching ideas for Witness, ” the Penang-born Teng recounts the beginnings of St. Louis Superman. She pitched Bruce's story and brought Sami, another incredibly talented director and cinematographer to the project.”

Tan - who hails from Kuching and is now based in Los Angeles – have been working with Smriti and joined the team as a co-producer. St. Louis Superman, produced by two Malaysians, made it to the top 10 shortlist for Best Documentary (Short Subject) at the upcoming Oscars.

The 25-year-old recalls the biggest challenge she encountered making St. Louis Superman. “There are moments in the interview where things become very raw as Bruce talks about certain events in his life or the struggles he still deals with today.”

In the documentary, Franks Jr reveals he has been surrounded by gun violence all his life, and personally knows many of the lives it has claimed. His nine-year-old brother was shot and killed in front of him.

The shooting of Michael Brown was a breaking point for Franks Jr, prompting him and many in his community to take to the streets.

Tan says: “Sometimes, it’s archival footage of him in the past from his Ferguson activist days and you see footage of him at rallies or protests, leading it and also how they are treated by law enforcement.

“I cannot tell you how many times I had to step away from the screens to take a breather because all the things you see in the news, they’re real and there are real people behind it, not just death tolls and words.” St. Louis Superman has traveled to over 30 festivals prior to its Oscar shortlist.Tan’s foray into documentaries started right after film school.

“When I was finishing up my last class in film school, I saw an ad on Craigslist for an assistant to a journalist/documentary filmmaker and applied for it and was offered the job. So, I started working with Smriti.”

As for Teng, prior to making documentaries, she was an experienced video journalist and producer, working for top international news companies The New York Times and Associated Press.

During her stint at New York Times, she even earned an Emmy nomination for Outstanding Interview for the documentary, Flirting With The Islamic State, in 2016.

She directed and produced her first documentary, Pecah Lobang, in Malaysia back in 2008.

Asked what advice she would give to aspiring Malaysian documentarians and filmmakers, Teng offers:

“Surround yourself with people who aren't from where you come from, and who you might strongly disagree with. Learning often comes not from being proven right, but from being proven wrong. That's a good starting point to find stories that you need to tell, and to understand the world for yourself.”

Since St. Louis Superman, Teng has been involved with two new documentaries Dead Woman’s Pass - about a Peruvian indigenous woman’s journey towards overcoming domestic abuse and trauma – and In Enemy Territory – about a farmer in Colombia whose community is trapped in between violent paramilitary forces and the army.

Meanwhile, Tan has two projects she’s currently focusing on - a documentary on a hip hop crew in the slums of Mumbai, India and another one about the rebuilding of the city of Flint, Michigan after its people were exposed to drinking water containing high levels of lead.

She also teases she is in the early stages of working on a Malaysian-set documentary. Tan believes there’s a wealth of stories here yet to be mined:

“I think there are still so many Malaysian stories that are waiting to be told and I’m dying to see it from the perspective of the Malaysian people... It’s important for us to start telling our own stories and to support other filmmakers who are telling the stories of the marginalised, discriminated and oppressed communities in the country.” 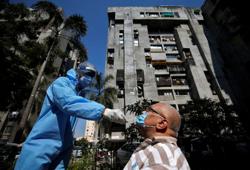