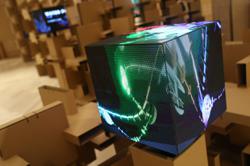 The inaugural Klang River Festival (KRF) 2022, is an annual open festival in the Klang Valley that aims to facilitate public discourse and knowledge-sharing about heritage, culture, and identity.

The free admission festival, through a diverse programme featuring contemporary art, social and cultural events, invites the public to discover (or rediscover) neighbourhoods and urban areas along the Klang River.

Held from Nov 25 to Dec 4, the Klang River Festival highlights the river’s importance as a source for transportation, fresh water, food and religious rituals, while acknowledging its transient and ever-changing nature.

It also demonstrates how communities that have sprung up along the waterway and its tributaries have been shaped and changed by them and vice versa. A view from under the bridge that connects Old Klang Road to the New Pantai Expressway (NPE). Sans Collective will be installing its light projection series 'Dari Lumpur Ke Laut' at this location. Photo: Klang River Festival

The events will be held in several arts-based centres and community areas in Kuala Lumpur as well as in Klang, Selangor.

“Most people regard Klang River (basin) as a geographic place of commerce, work and entertainment, not knowing that Klang River and its tributaries are the veins and arteries of the land and that dwellers once relied on for transportation, fresh water, food, farming and even religious rituals. Though many places of interest along the river have been forgotten, they were once closely related to each other and interconnected through water.

“Klang River Festival’s main objective is to raise public awareness on the importance of the river and to bring together interests and concerns that would help transform Klang River Valley into a better place to live in,” says Teoh Chee Keong, festival advisor and vice president of arts space KongsiKL.

The identity of a place is shaped by social activities and physical changes, and Klang has seen its fair share of change over the decades, with the Klang River being a constant central presence.

KRF sets out to showcase the effective use of public spaces, while also facilitating public discourse and knowledge-sharing about heritage, culture and identity. 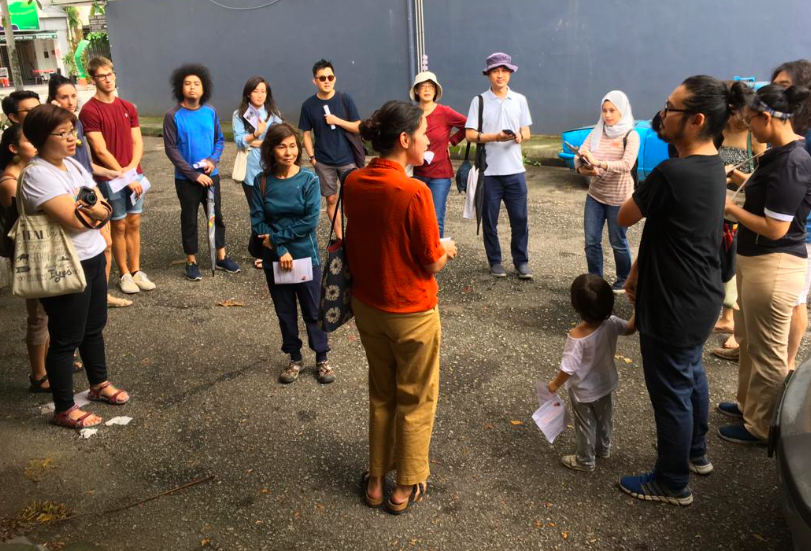 Kerja Jalan, a collective of heritage activists, will be taking visitors for tours curated for the festival. Photo: Kerja Jalan

Klang River has historically shaped our city to be what it is today. It flows from the north of KL through the city centre and travels all the way to the Strait of Malacca in Port Klang. The Old Klang Road built over a century ago by the British Colonial Government mimics the river.

“Before the Federal Highway was completed, this was the only trunk road linking KL to Klang,” says Yasmin Lane, who curates Kerja Jalan, one of the KRF heritage walks.

This morning walk will start at KongsiKL and head in the direction of the river, with stops along the way to learn more about the community and history of the area.

Old Klang Road may look like one long road on the map, but on the ground, you notice the different stories around each bend.

“Communities that evolved along this road are distinguished by the distance in miles it is situated to the city. For instance, KongsiKL sits at Batu 4½ (the 4½ mile mark). As you move along the river you will find different pockets of developments that have mushroomed and thrived, with unique stories at every mile,” she says. 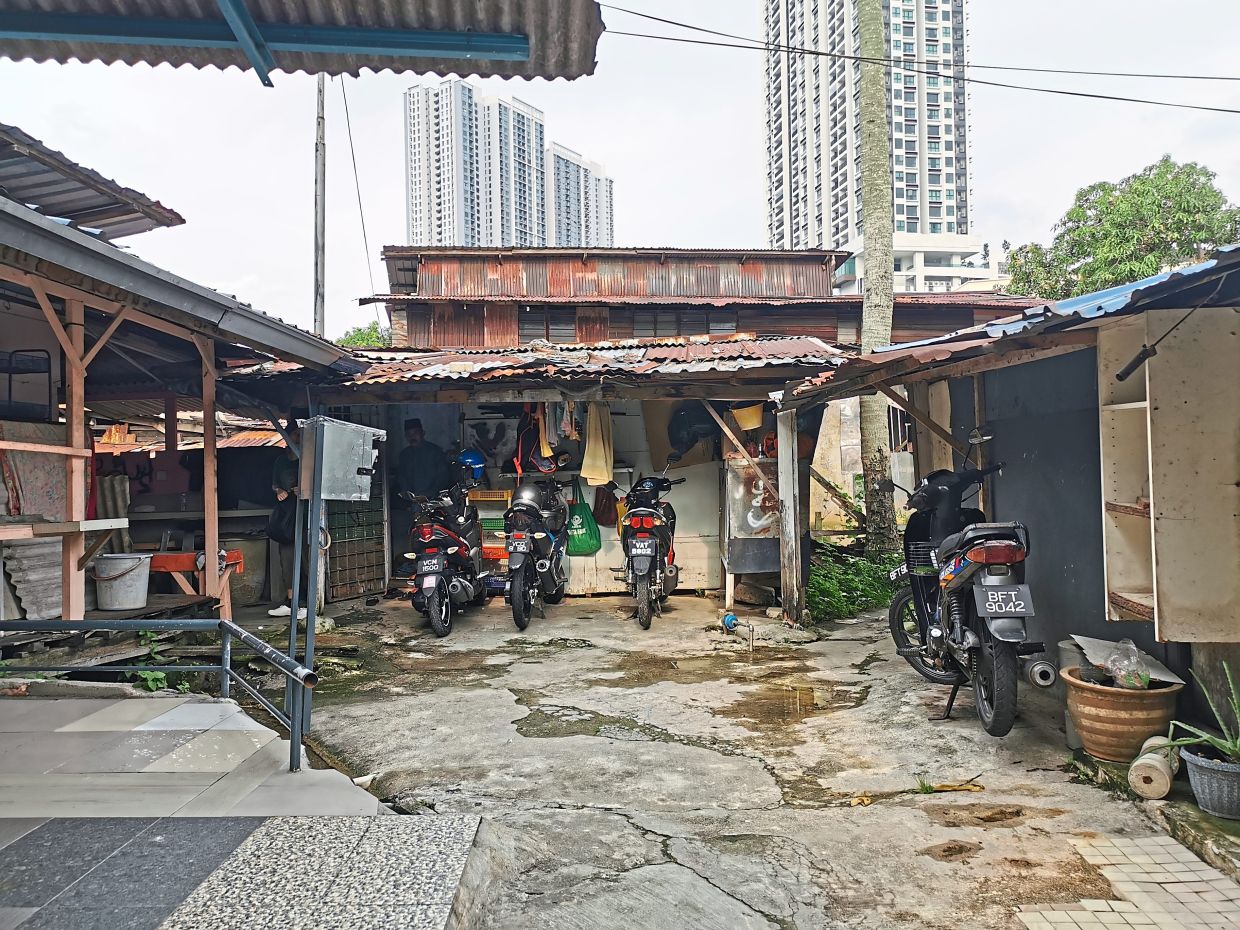 Throughout the festival, the research exhibition Old Klang Road Revisited will be open daily. It explores the relationship between the Klang River and Old Klang Road, and welcomes the public to be part of the repository of memory on the subject.

Dennis Ong, who is part of the research team, notes that the Klang River begins in the cold murky darkness of the Ulu Gombak Forest Reserve and from there, it makes its way down in a southwest direction,twisting and turning for 120km.

“It is famous for how it meanders in a serpentine fashion, often causing floods during the monsoon or heavy rains, while its bends and nooks provide shelter for crocodiles to lurk closer to unsuspecting humans. Along the way, it is fed by a system of 13 major tributaries, each one rich in its own lore. Finally, at the end of its journey, the Klang empties into the Straits of Malacca at the port city that shares its name,” he says.

He points out that there have been many attempts to tame the Klang River’s flooding, and the past few decades saw numerous river projects to mitigate the annual deluge, such as the building of embankments, as well as the deepening, straightening and widening of the river, and even the altering of its course.

“The Klang River runs almost parallel to Old Klang Road and the KTM railway tracks, a stark surviving reminder as to how the road once played an important role as an alternative thoroughfare, despite the march of time,” he says. 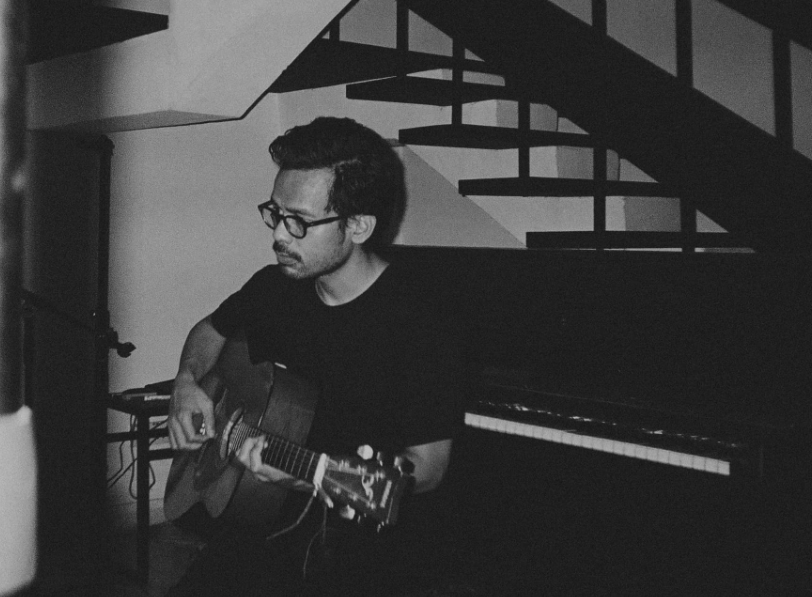 Singer-songwriter Fikri Fadzil, who is known as Bayangan, will be performing at the 'Flow Of Rhythm' concert at KongsiKL on Nov 27. Photo: Handout

Digital arts collective Filamen’s Abdul Shakir, who is the curator of KRF’s light projection projects, says that the festival is a platform not just for artists to connect, but also the communities in the vicinity.

“I hope this festival can bring people together, just like how we used to build settlements by the

river in the past. Hopefully this will also lead to people appreciating the river more,” says Shakir.

Photography enthusiasts can check out the Living By The River photography exhibition at the Oriental Art And Cultural Centre (OACC) in Old Klang Road, which will also feature video works.

“The exhibition comprises abstract images that express the movement of water as well as documentary-style images that capture the faces, landscape and built environment in the vicinity of the Klang River, contributed by various photographers like Alvin Lau, Amirul Rahman, Andrew Ling, Douglas Ho, Low Pey Sien, Tang Chun Cheuh and Zung Heng. 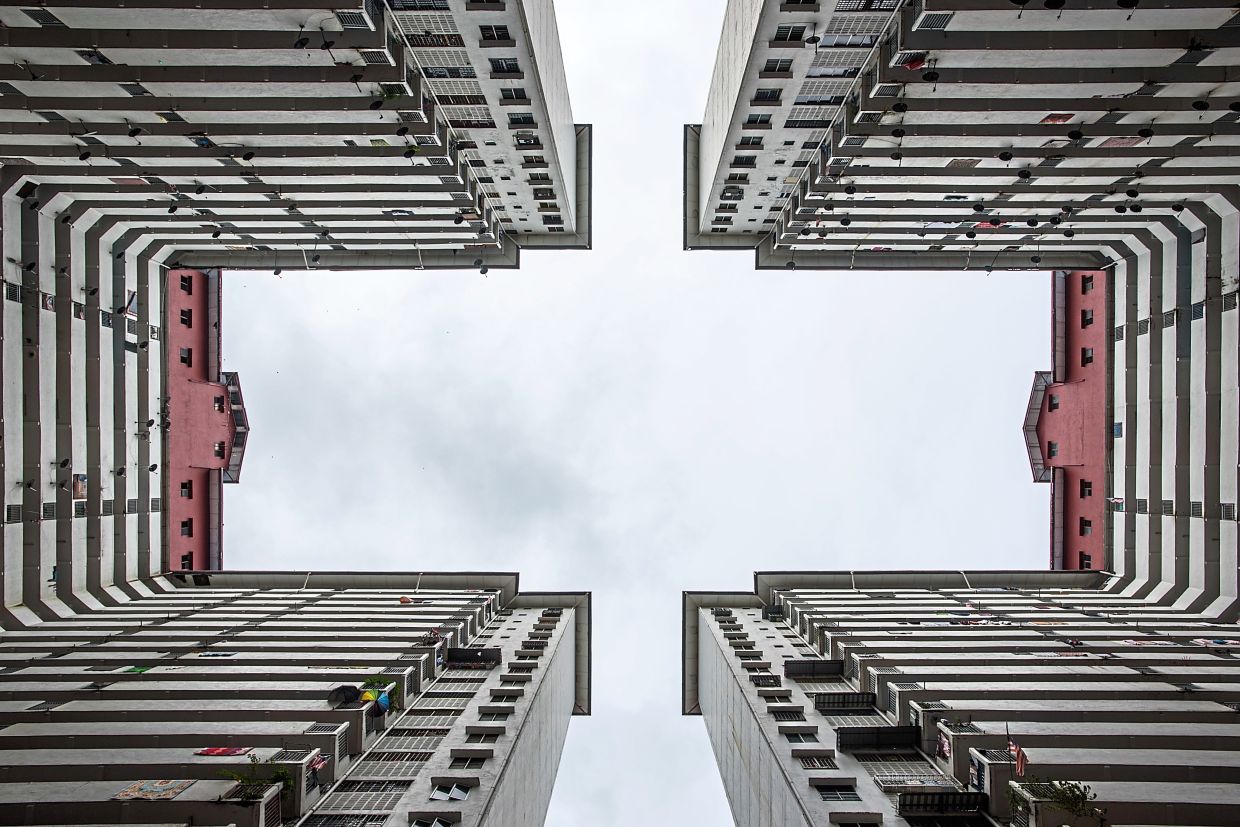 “We are also including some images taken during our walks while preparing for the festival,” says festival producer Mah Jun Yi.

At KongsiKL, there is an art installation by artist Liew Chee Heai titled My Island, where he draws on memories of his time living on a small fishing island off the coast of Japan, with around 30 inhabitants. He was based in Japan for 16 years and is now back in Malaysia.

“We replenish our food and daily necessities on the mainland. Whenever a typhoon hits, the boat and ferry services would be suspended, and we are isolated. I lived in a house facing the sea. From my house, I would see the ocean and fishermen out at sea. I would describe it as a lone island, because I don’t usually meet people, I am alone most of the time. So I transfer my memories and feelings on the island into this installation,” says Liew.

My Island is a large-scale installation that sits on water, with ice and a smoke machine to create fog on the water. It is a set up that Liew describes as poetic and containing slices of his life.

“The nature of an island in contrast is soft and mysterious in solitude. The installation will soften the KongsiKL space, which is masculine, with its exposed iron roof trusses, bare concrete floor and straight lines,” he adds.

The Klang River Festival gathers experts and enthusiasts under one roof in its Festival Dialogue Series, creating a space for discussion through talks that revolve around themes such as community and cultural practices, placemaking, development and photography documentation. 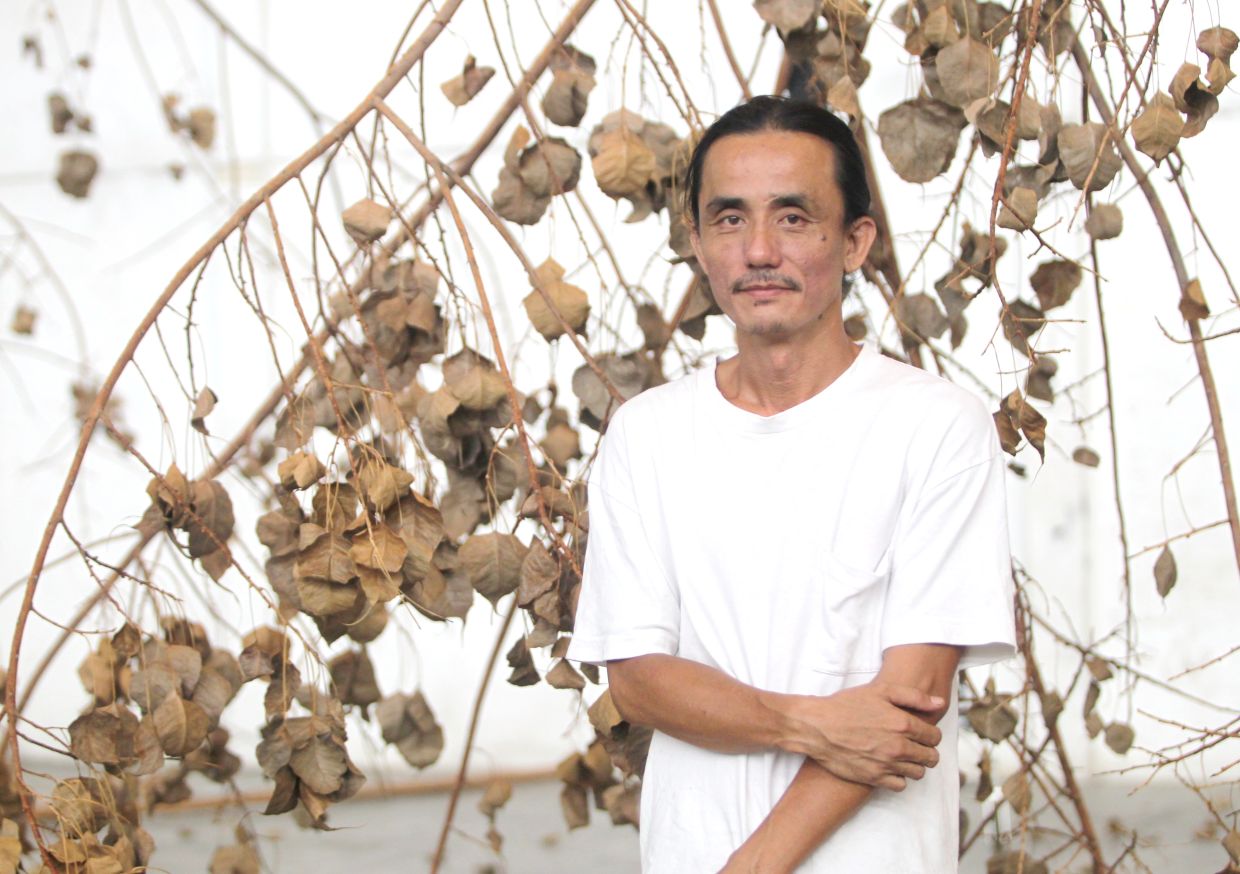 At KongsiKL, artist Liew Chee Heai will be presenting an installation work titled 'My Island', where he draws on memories of his time living on a small fishing island off the coast of Japan. Photo: The Star/Art Chen

In the Placemaking: Antara Hulu Dan Hilir session moderated by Bilqis Hijjas at KongsiKL, they will consider how to map the layers of this complex urban landscape, and initiate a discussion on the conservation concerns of a community once united by the common experience of living by the river, who are now divided by the highway.

At OACC, writer and curator Wendi Sia (also the co-founder of Gerimis Art Project) moderates Lens On Indigeneity with speakers Jeffrey Lim and Jefree Salim. Both photographers will talk about their work and draw parallels and contrasts in their approach, visuals and outcome when documenting indigenous communities in Malaysia.

For a glimpse into the thoughts and creativity of local filmmakers, head on over to the film screenings at TDSC and OACC.

One of the films, Liew Seng Tat’s Welcome To Kampung Radioaktif, is a tongue-in-cheek take on the Lynas controversy, set in a post-apocalyptic Malaysian village where those who cannot afford to flee their ancestral homes have their lives turned upside down, literally. In concluding, KRF’s creative director and KongsiKL president Joseph Foo says that for centuries, the river has been an important part of life for many Malaysians.

“We have been blessed by the resources in and around the river for generations, however many city folk have turned their backs to the river for development. It is time now for us to reconnect with the river.

"We hope that this festival will inspire and educate through the arts, to bring awareness of the river’s rich cultural heritage and the importance of recreating a sustainable ecosystem by the river for our future generations,” he says.

For the festival programme and more information, click here. 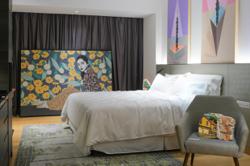