'I’m doing this tour now, to tell people that I’m an artist in my own right,' says Nigel Ng aka Uncle Roger at a recent press conference in KL. Photo: The Star/Azman Ghani

For starters, the London-based comedian knows he has a big night ahead with his The Haiyaa World Tour date in Kuala Lumpur this evening. But he also knows that his favourite local food checklist must be ticked off upon landing home.

Each time the 31-year-old former data scientist flies back to KL, he drives straight to the nearest mamak restaurant, heads to his favourite pan mee shop and visits his family in Kajang.

As his The Haiyaa World Tour opens tonight at the Plenary Hall, Kuala Lumpur Convention Centre, he knows the home crowd will be on his side.

This is part of Ng’s inaugural global tour which began in February, with a series of shows in Britain and the United States. He also has Bangkok, Singapore, Tokyo, and Taipei as part of the Asian leg of this tour.

“I’m excited about this tour. I have some local content just for my Malaysian fans. I don’t want to reveal too much but one of the things in my set is about how back then, if you had Astro, the moment it rained, you couldn't watch television at all!” says Ng in a press conference in KL today.

Ng went viral in 2020 for his portrayal of "Uncle Roger" on his YouTube channel. The character, created during the pandemic lockdown, was based on a grumpy Asian old man (or more precisely, a Malaysian Cantonese uncle) who went on to review BBC Food’s cooking host Hersha Patel’s version of an egg fried rice recipe.

In the video entitled "Uncle Roger Disgusted By This Egg Fried Rice", Ng expressed mock horror as Patel drained the cooked rice with a colander and then rinsed this with running tap water, using his famous “Haiyaa!” (to express disappointment).

His scathing review earned him millions of views (30 million so far) and fans worldwide. In fact, there’s a food stall in Sarawak called "Haiyaa Breakfast" that pays homage to him.

Earlier this week, Ng caused a stir when he received flak from Singaporeans for his sweeping take on their food.

"You guys just do a weird, less good version of what we do (in Malaysia), to be honest. Your bak kut teh is pale, it's transparent. I think there are more similarities than differences, but Malaysia has better food, especially in Penang. I don't think any region here can touch Penang - it's too good," Ng was quoted as saying a recent interview with The Straits Times in Singapore.

Ng also has a podcast on Asian culture called Rice To Meet You, which he hosts together with British-based Swedish comedian Evelyn Mok.

Interestingly, it was Mok who pitched him the idea of this trash talking, middle-aged Chinese uncle for a sitcom. He worked on the character on TikTok and Instagram before giving Uncle Roger a Youtube debut.

When asked if it ever bothers him that people recognise him more as Uncle Roger than Nigel Ng the stand up comedian, he quickly replied, “no, because we share the same bank account!”

“Of course, many of the contents I have put out are Uncle Roger related. And that’s why I’m doing this tour now, to tell people that I’m an artist in my own right.

“But to be honest, Uncle Roger is so much more accessible. Just like Rowan Atkinson. He does stand up too but people know him for his Mr Bean character. So, I’m okay with that,” says Ng, attributing his sense of humour to friends, family and genetics.

On the live stage, Ng drags out the 'Uncle Roger' routine for the first part of the show, before he takes over the night.

Ng moved to the United States in 2010 after graduating from Chong Hwa Independent High School in KL. It was while he was studying engineering at Northwestern University in Chicago that Ng started performing comedy.

He then moved to Britain after graduating in 2014 and worked as a data scientist before venturing into stand-up comedy full-time in 2019. Ng was nominated for the Best Newcomer award for his sold-out show at the Edinburgh Fringe Festival in 2019 and has had multiple sold-out runs throughout Britain and Europe.

For such a rising star in the comedy scene, Ng also has some useful advice for aspiring stand up comedians.

“Lean into the power of the Internet. Put yourself out there and think global,” he concludes. 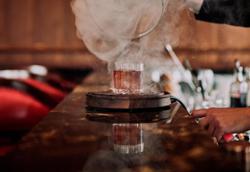