VIRTUAL DOCUMENTARY: A PIECE OF HEAVEN

Take a virtual trip to Dikaki Tower House, a treehouse and homestay at the foot of Gunung Raya in Langkawi. In this mini documentary, get to know visual artist/wood sculptor Tajalli Abdullah and his wife, visual artist, Normal Ismail, the couple behind this art haven away from the hustle and bustle of city life.

Surrounded by acres of natural landscape, this hideaway is catered for art enthusiasts, nature lovers or anyone who wishes to unwind. Art is a big part of this house, inspiring each corner. Tajali and Normal also share about their lives at Dikaki Tower House, their daily routine and how the green valley in Langkawi inspires them.

A Piece Of Heaven can be streamed for via Youtube. 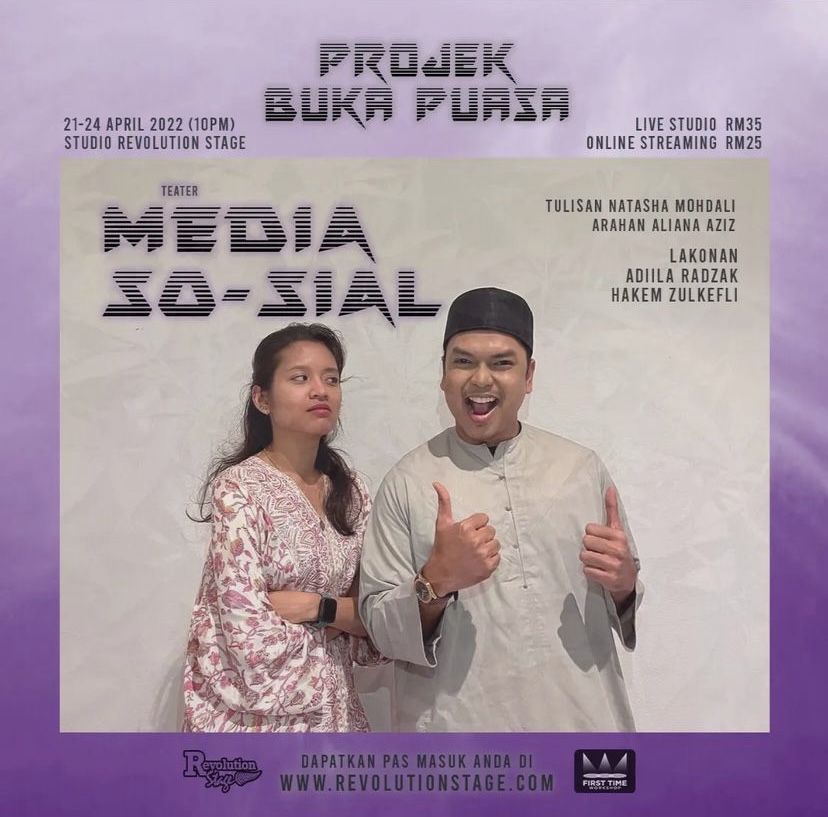 'Media So-sial' written by Natasha Mohdali is one of the five plays in the Projek Buka Puasa offering. Photo: Handout

Paleorapu written by Syah Fisal, revolves around two friends who want to hide elephant meat from a killer T-Rex. Tok Roam written by Izhar Azree, revolves around a young man who studies war but lacks patience. Media So-sial written by Natasha Mohdali, is a sharp look at the attitude of social media influencers.

Raja Bulan's Bilik Fotostat follows a tale of rage, featuring a young man who has been oppressed by his employer. Rahim Ramli's Kucing Kurap Kebulur touches on a community's arrogant attitude toward the unfortunate.

Anak Muda Buka Panggung is a new segment in the Dramatic Dialogue podcast hosted by Syafiq Syazim. This segment features five young traditional arts practitioners and activists who will be sharing insight about their respective fields - the origins, traditions and challenges.

This new segment is supported by the Cultural Economy Development Agency (Cendana).

Buka panggung refers to the performance structure present in any traditional performance that marks the beginning of a story. This project aims to start a conversation and raise public awareness about Malaysian traditional arts.

Anak Muda Buka Panggung can be streamed on Spotify.

VIRTUAL THEATRE: THOSE WORDS THAT SHAKE

In this virtual theatre show by Pitapat Theatre, its founder Seng Soo Ming brings to life the world of Shakespeare, exploring fragments of the Bard’s text. By taking out the stories, the characters and the specific historical period, this show focuses on the chemistry and the impact between the chosen texts and Seng. The chosen texts are from Hamlet, Macbeth, Richard III, Titus Andronicus and A Midsummer Night’s Dream.

Those Words That Shake, ticketed, will be streamed via Pitapat Theatre’s Youtube channel.

This Ramadan season, the Kuala Lumpur Performing Arts Centre (KLPac) will be revisiting three shows under its WFH@KLPac series. They will be streamed on CloudTheatre.

Hikayat Si Miskin Menjadi Raja tells the tale of two young men, Amir Hamzah, a wealthy prince, and Kadir Jabun, a poor boy. The duo accidentally exchange identities and get into all sorts of trouble, including a prison sentence and a wrongful coronation.

Pragina: EMOSI is a coming together of traditional and contemporary Balinese dance, presented by Emi, Shafiq Yussof and Zhafir Muzani.

Life Sdn Bhd: Differences is a platform to highlight young voices in the arts as they share their dreams, hopes, nightmares and struggles.