A video still from 'Di Bawah Bintang Mengerdip', the oldest short film in this series from 2010, which is a spoken word project between Space Gambus Experiment and National Laureate Datuk A. Samad Said. Photo: Nur Hanim Khairuddin

The virtual event, with an international line-up, will be streamed for free on KLEX's YouTube channel, starting March 10 at 8pm to March 12 at 10pm.

Founded in January 2015, ExScreen is a film screening series of KLEX that works to broaden cinema works with an alternative, experimental and unconventional approach. To attract a new audience in Malaysia, ExScreen aims to promote discussion, analysis, and overall appreciation around such experimental film works.

This year the films chosen are based on the theme: "Home". The short films were made between 2010 and 2020. 'Chinese Whispers' offers a tale of a children's rhyme in Teochew, a Chinese dialect, that the artist vividly recalls from her late grandmother. Dialects are usually spoken among family members, but not an official language that would be taught at schools. Photo: Handout

"The home has become the centre point of our lives since the beginning of the pandemic. It is our restaurant, our gym, our nightclub, and our resting space. The home has become static. Singular, in place. A repetitive lifestyle that is reflected in Harenstam’s Closed Ciruit (2011), where the loop peels back something perhaps more ominous behind the hearth," says Chris Chong Chan Fui, ExScreen 020: Home programmer.

"The home can also be a deception as in Man’s Home Sweet Home (2012)... a series of layers in the promotion of new homes, aspirational homes, and homes in reality. Does the home live within us or does it require four walls and a contract?" he adds.

"As we move further and further into our own minds, without social discourse, we look for safe spaces in whispers or more concretely, the structure of poems." 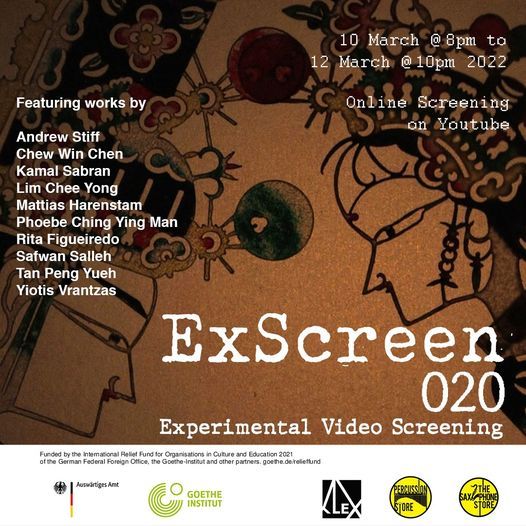 Among the short films featured are Chinese Whispers (2018) a short film about Teochew language poems being passed down from different generations. Directed by Chew Win Chen, the film recalls her late grandmother's children's nursery rhymes delivered by her cousin’s aunt, father, and herself. Another documentary Kemubu (2020), directed by Safwan Salleh, captures the changing landscape of Kelantan from the directors own collection of personal videos. Memories stitched together, the film is a walk down memory lane of childhood and adolescence.

Di Bawah Bintang Mengerdip, the oldest short film in this series from 2010, is a project between Space Gambus Experiment (SGE) and National Laureate Datuk A. Samad Said. The inspiration for this poem was derived from a series of unfortunate stories that the senior poet heard from some dancer friends some 60 years ago. He was deeply touched by their stories and wrote this poem in 1960. The recital of the poem was recorded live in 2010 with music support from SGE.

With help from the Goethe Institute, a German cultural exchange institution, KLEX has been able to create events to promote the alternative music and film scene in KL. From the SPIL Improvisational concerts and the ExScreen screening events, KLEX has adapted a hybrid approach to run its arts programmes. Soon it plans to release an album featuring 10 KL-based musicians who performed at the SPIL Concerts entitled: Serious Play Improv Lab Volume 1.

‘The Swordfish, Then The Concubine’ returns to question the power of oaths

In Kuala Lumpur, a creative community mall embraces diversity in the arts