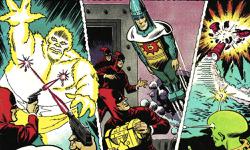 When you think about horror fiction and dark fantasy in Malaysia, Tunku Halim is a name to crop up first on any blood-stained list.

Since the 1990s, the 56-year-old author – with a legal background – has been spooking readers with his brand of "world gothic" tales and collections, including Dark Demon Rising, Horror Stories and Scream To The Shadows

In these pandemic times, Tunku Halim has put on a new - frightful -mask and taken on the challenge of writing stories for children.

He has written for a younger demographic before, focusing on history in books such as History of Malaysia, A Children's Encyclopedia and A Children's History Of Malaysia.

With the recent release of The Midnight Children trilogy (published by Penguin), Tunku Halim has turned his attention on spooky-based fiction for children.

"But I’d never written a story for kids and I wondered if I could do it. So I sat down one morning after breakfast and wrote a story about a vanishing dad, ” he adds.

To Tunku Halim’s surprise, the story not only took on a life of its own, but started to multiply. The author ended up writing three short stories, before realising he could expand the collection.

“About three quarters of the way through, I thought it would work better as a novel. After, all I had been using the same characters throughout the stories, and all I needed was an overarching narrative to link them all together. 'Gothic elements are found in mystery, the unknown, a hidden secret, an old mansion, omens, a female in distress, all of which unfold in the trilogy. So there’s a lot to enjoy!' says Tunku Halim about his new books for children. Photo: Filepic

"And then as there was so much exciting stuff happening in the first novel, I realised that it would have to be a three novel series, ” he elaborates.

Each book follows the stories of teen siblings Zak and Min, and the strange adventures they get into after their father mysteriously vanishes one morning.

In The Vanishing, Zak is trapped in his bedroom by vicious snakes, while Min encounters scary spider-like creatures. To make things worse, a man gives them a box with a finger bone inside!

Things get scarier in the next book, where Min is forced to move to the mysterious Cemetery House, while Zak, chased by terrifying creatures, can’t get home.

It all builds to a climax in The Moonlight World, where the two siblings face off against creatures known as Yak-Yaks, and their king. “I used creatures and spirits from Malay and South-East Asian myths in the three novels. But you’ll also find unique creations from my own dark imagination. I won’t want to go into the details as I don’t want to spoil the story for readers, ” says Tunku Halim.

Enough to scare, not scar

While Tunku Halim does have a daughter and a son, he insists he didn't base the characters of Zak and Min on them. They did, however, give him great insights on writing the sibling dynamic.

The author assures us that his new books were more in the realm of spooky fantasy rather than being outright horror.

He is mindful that he is writing children’s books, and did not want his readers to get nightmares.

“Having said that, the wonderful thing about books, compared to movies, is that if things gets too scary, we can always skip a paragraph or page which you can’t do with a movie.

"Nor are there any jump scares in books, which I think is a cheap way of scaring viewers. But I don’t think there’ll be any reason to skip paragraphs in the Midnight Children trilogy, ” says Tunku Halim, who as a child enjoyed the Narnia Chronicles before moving on to the Lord Of The Rings and Chronicles Of Thomas Covenant in his teenage years.

In many nostalgic ways, he adds that it was a fulfilling experience to realise his new children's book project.

“I enjoyed reading about what Ragdoo gets up to, a character that doesn’t appear until the third book. I also quite like the horrid Uncle Obb, whom we don’t really get to know until the second book, Cemetery House. I like the way how everything comes together in the last book."

The feedback for the Midnight Children has been encouraging, and Tunku Halim admits "it is better than for my adult tales."

“Both have their own set of challenges and I wouldn’t say one was harder or easier than the other. You have to be disciplined when writing for kids. You have to stay within the boundaries of children’s expectations, comprehension, and values, ” says Tunku Halim.

“You have to write from a children’s point of view, which means often having to recall your own childhood. You have to be very focused when writing for kids which makes it harder but also, in some ways, easier too.”

“If kids don’t like a book, they’ll just put it away, never to return to its pages. Adults, having paid good money for the volume, will try to finish it, ” he concludes.