The recent backlash against refugees and migrants in Malaysia has forced 12 refugee participants/speakers to pull out from the upcoming Refugee Fest 2020, which will be streamed online from July 4-10.

Nevertheless, Refugee Fest co-director Mahi Ramakrishnan believes that the festival has still a lot of good to give.

“Me and (festival co-director) Saleh Sepas spoke to the participants and artists, and they said it was unnecessary to put themselves out there at this point of time because of the backlash. They didn’t want more backlash for no reason, ” says Mahi in a phone interview.

Afghanistan-born Malaysia-based Saleh is the founder of Parastoo Theatre Team in KL, a performing arts outfit to empower refugees.

"And I thought, maybe we should just cancel the festival this year. Especially because there is also the pandemic. But we talked about it, and we realised that the festival is a good platform to send a message calling for unity, and tell the government it has a social responsibility to protect refugees, ” adds Mahi.

For the 12 speakers who have dropped out, Mahi says there will be an empty chair at each panel to symbolise their absence.

"Many refugees are incredibly grateful to Malaysian for letting them be here. A lot of them have friends here. So they don't want to say anything that will upset Malaysians or create more issues," says Mahi.

In Malaysia, the tolerance, understanding and the value of co-existence with refugee communities has been strained this year, especially with the Rohingya boat pushback incidents, death threats against refugee community leaders and activists who support them.

Mahi reveals that during the movement control order (MCO), Beyond Borders Malaysia had managed to donate groceries to about 25,000 families, including refugees and migrants. This was mainly made possible through donations by Malaysians.

"We thought we had been making inroads. But the last few weeks and months have been really difficult. But I still like to believe that any hate comes from ignorance and fear. Hopefully, we can still rekindle relationships, and get Malaysians to understand that refugees are fleeing persecution and death. And that seeking refuge is a human right," says Mahi. 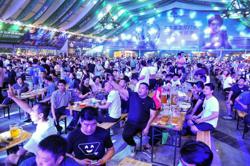