Before the outbreak of Covid-19, you rarely heard words and phrases like that. Today, however, it is rare to read a newspaper or news website without seeing them. Other words, such as quarantine, virus and lockdown, have taken on heavier significance, conjuring up all kinds of images whenever someone uses them.

As the Covid-19 pandemic grips the world, it can sometimes be easy to get lost in all the new terminology being used.

One individual who noticed this was Malachi Edwin Vethamani, professor of modern English literature at the School of English, University of Nottingham Malaysia.

“I became very aware that we were being bombarded with many new words during this time of the Covid-19 pandemic. Many words were taking on new meanings and ordinary people were now subjected to these words which we used in the media and various messages that was being circulated, ” says Malachi, 64, who is also an author and poet, in a recent interview.

Malachi decided to highlight some of the words which have been appearing very frequently in Covid-19 media coverage and beyond. He took a few days to study the newspapers, online news an also public speak now. That led him to recently compile an “A to Z” of such words, titling the project “My Coronavirus Lexicon”. (Ed: Check it out in the gallery below).

The lexicon is an insightful, often humorous collection of word definitions from “asymptomatic” to “zero business”, perfectly capturing the mood of these troubled times. The lexicon was posed on Malachi’s Facebook page on March 24, where it has since received an enthusiastic response.

“I wanted to create awareness, educate and also present these words, often in a humorous way so the readers could connect with them. I also wrote this lexicon so as to have a record of what were some of the common words during the 2020 coronavirus pandemic, ” adds Malachi.

Some of the definitions from Malachi also come with a side of social commentary. “Anti-social stockpiling”, for example, is defined as “hoarding”, to highlight the negative behaviour that has been on the rise since the movement control order was enforced.

Other entries are inspired by current events. The entry for “younger patient” came after Malachi read an article about an Italian priest who died after he gave up his treatment for a younger person. He was also fascinated how “younger” has become a relative term, with “younger patient” beginning to refer to anyone below 60 years of age.

“One of my own favourite entries in the lexicon is “Panic Buying: toilet-roll craze”. I wanted to highlight how this was almost a worldwide phenomenon. Suddenly, people we were rushing to buy toilet paper when there was no scientific reason why it was essential during this pandemic, ” says Malachi.

“Another entry that I felt presented an important message is “Front-liners: first line of susceptibility”. We see this word so often that many do not realise the heavy responsibility and risk faced by those who are dealing directing with people who are infected or suspected of being infected by the virus. It’s a word that is taken for granted and skimmed over.”

Malachi says his academic life has also been drastically affected by the Covid-19 situation, and he was trying to keep busy and stick to a daily routine through the ongoing movement control order. He is now doing new things such as preparing online lectures and communicating with his students online. While times are difficult, he maintains it is important not to lose hope.

“I hope we can all be responsible and follow the regulations. The rules may pose various inconveniences but are necessary. Let’s keep our morale high and stay safe, ” says Malachi. 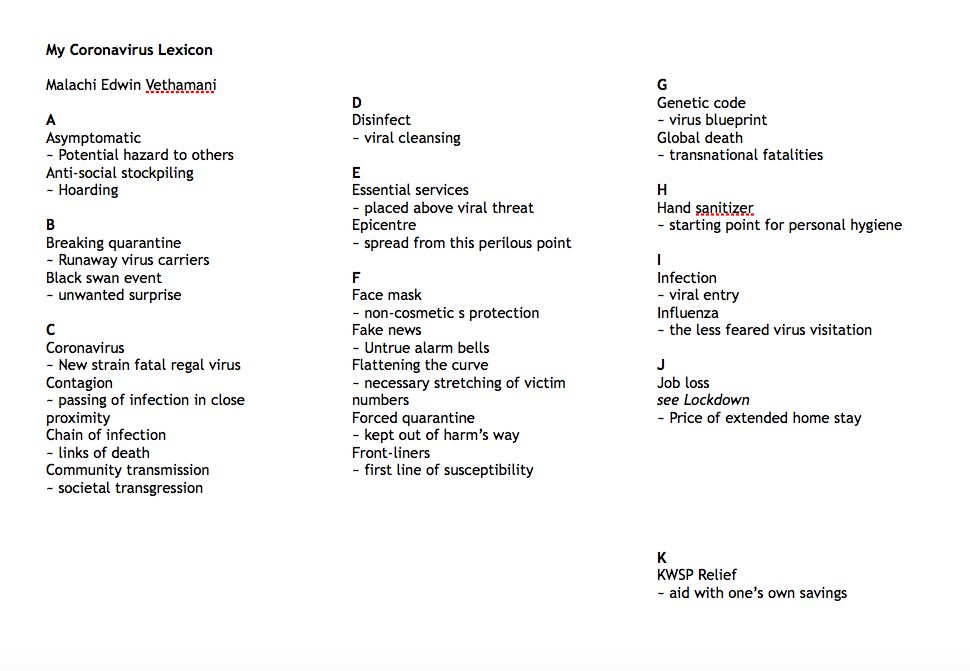 How many toilet rolls can you draw? Malaysian artist sketches Covid-19 situation daily