Chinese Malaysian author Ho Sok Fong writes about small town life in Malaysia in her second anthology, the first to be translated into English.

When it comes to enjoying books, we readers usually have a “reading space”, a favourite little corner or room where we can curl up with a book and escape the world. Ho Sok Fong’s favoured space when she was a child was rather unusual: outside the family washroom.

“I remember when I was nine, we would gather around the kitchen and outside the newly-built washroom and read romance stories in the newspapers,” the Malaysian Chinese-language author tells us in a recent email interview. “The washroom was really clean, it was a modern toilet and the floor was tiled, everyone in the family was reluctant to use it. The floor outside the washroom was cemented smoothly with concrete, so my aunt and I would sit there and spend the day chit-chatting, reading and even taking afternoon naps,” says Ho, 50.

From reading outside the washroom, Ho has moved on to become a writer and, today, she is an award-winning author and has published two short story collections, Maze Carpet (Aquarius, 2012) and Lake Like A Mirror (Aquarius, 2014).

Ho writes and mostly speaks in Chinese; her answers to our emailed questions were translated into English.

She recently gained prominence beyond a Chinese readership after Lake Like A Mirror was translated into English and released by renowned British publisher Granta in November 2019. Since then, it has been receiving acclaim both locally and overseas, including winning a PEN Translates award (given out by worldwide writers’ association English PEN).

What did Ho think of her book’s translation by Natascha Bruce?

“Interpreters have their own way of decoding and interpreting the story, and it is inevitable. Nonetheless, her interpretation still conveys the beauty of the words, but in a different language,” says Ho.

Kedah-born Ho – who is now based in Kampar, Perak – first worked as a process engineer in Penang for four years before deciding to become a journalist instead. She then completed a four-year Master’s degree in Chinese literature studies in Taiwan and received a doctorate from Singapore’s Nanyang Technological University – all while lecturing at Malaysia’s Universiti Tunku Abdul Rahman.

“What really prompted me to start writing was reading modern literature published in newspapers I read during my high school days. These works rarely mentioned politics but leaned more towards aesthetics and poetic expression. They focused more on expressing feelings and emotions,” she says.

Lake Like A Mirror contains nine stories, all combining to create a colourful portrait of Malaysian society. The anthology opens, fittingly enough, with the very first short story Ho wrote for publication, “The Wall”, which was first published in 2002 in Malaysian Chinese daily Nanyang Siang Pau.

“Aminah” is perhaps the most talked-about story in the collection; it’s about a woman in a rehabilitation centre for “wayward women”, and the trouble she causes with naked sleepwalking. Lake Like A Mirror has been described in many reviews as focusing on women trapped in difficult circumstances. Ho, however, says that this is not the theme she set out to explore. Instead, she wanted to write about the marginalised.

“I often write narratives about marginalised groups. Being marginalised may sound depressing but it is not something tragic. I empathise with the experience marginalised individuals go through and I see things from their point of view.

“I deal with topics like victims of bullying and those who are ostracised, gender and ethnic issues, and individuals who are unique and different,” Ho explains.

Many of her stories have been described as surreal; Ho, however, thinks everything in life is a little surreal. 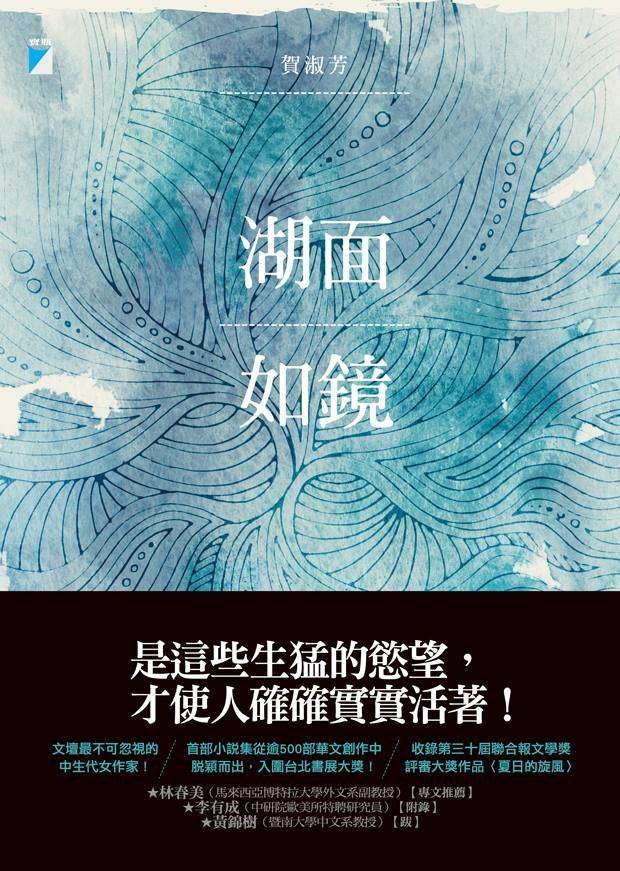 The Chinese cover of 'Lake Like A Mirror'.“We are living in a world where everything is surreal. Textbooks, newspapers, commercial ads and memoirs, they are all just fictional stories.

“The techniques of writing surrealist literature involves using fictional stories to talk about the real issues faced in actual life,” Ho points out.

While the author does not have a favourite story, she chose to end her anthology with “March Of The Town” for a reason. In the story, a young woman running her aunt’s guesthouse encounters a guest who checks out every day at noon, only to return later, seemingly having forgotten that he had already been there.

“I like the prose style of writing in ‘March Of The Town’ because it includes a great variety of contexts, like how it can be about Cui Yi but it can also be about the life of Cui Yi’s aunt and her regrets. Readers would experience and interpret the story differently each time they read it,” says the author.

Ho is currently working on her first novel, which will be about the May 13, 1969, race riots in Malaysia.

Getting Chinese writing recognised in Malaysia is challenging, she says, but it’s worth the journey.

“The Malaysian Chinese literature community is a small one, and our work is not recognised as national literature.

“As the community continues to shrink, we face problems that most big communities don’t face. Insufficient reviews, financial hardships that make us rely on funding, a smaller market size, and even political issues,” Ho says.

“Because of this, most of the authors I know do not write for commercial profit. We write what we want to write, and we don’t really gain anything.

“And that’s why Malaysian Chinese writers are the most passionate creators in the world.”