The late K.S. Maniam reading his work at the launch of 'Ronggeng-Ronggeng: Malaysian Short Stories' at Merdekarya, Petaling Jaya in December 2019. Photo: Handout

Award-winning local author and academic K.S. Maniam, known for his novels The Return and In A Far Country, died of cancer of the bile duct this afternoon (Feb 19) at the Universiti Malaya Medical Centre in KL. He was 78.

Maniam (born Subramaniam Krishnan) was revered in the local literary scene, and widely remembered as a thought-provoking writer who shaped the course of Malaysian literature. While many of his works touched on the plight of the Malaysian Indian community and marginalisation; his themes, characters and stories were also praised for their universal appeal.

Maniam was born in a smalltown called Bedong in Kedah in March 1942. He first started writing in his teens, with his first work, a poem, published in 1964 when he was 22.

Maniam's writing career saw him amass a portfolio of short stories, poems, novels and other works. Locally, his story The Loved Flaw won first prize in a 1987 New Straits Times–McDonald’s short story contest, while his Haunting The Tiger was a winner in a New Straits Times–Shell contest in 1990.

"I believe we should leave a record of ourselves and of our times in fiction. Everyone has a short story in him or her," Maniam was quoted as saying in The Star in November 2002. 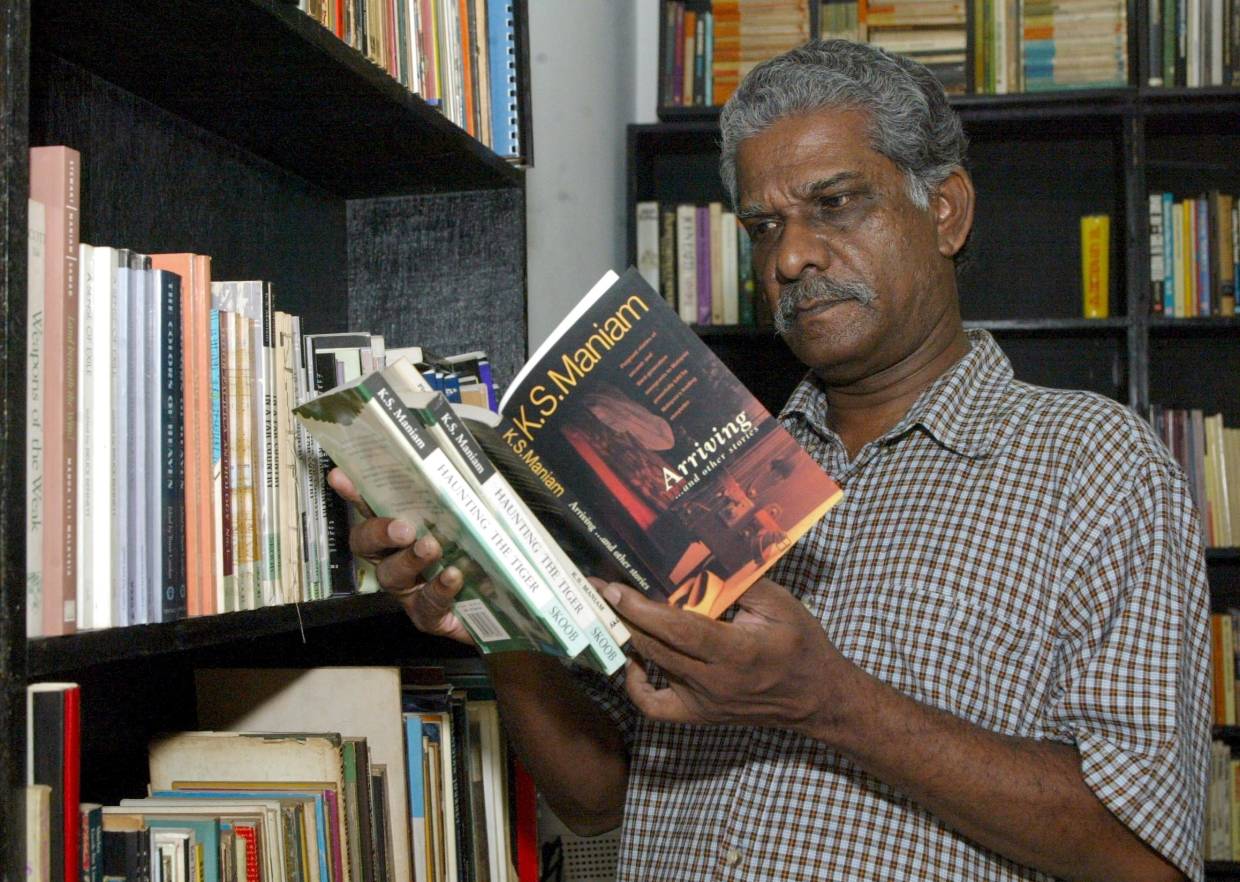 In this filepic, Maniam, who was known for his dry humour, is seen in his home study in Subang Jaya, Selangor in 2002.

Maniam, who was based in the Klang Valley, wrote three novels: The Return (1981), In A Far Country (1993) and Between Lives (2003). The Return was taught in English literature class in Malaysian schools for five years.

"His works were special. His mastery of cadence and rhythm allowed us to hear the people in his plays and novels rather than just the ideas, allowed us to hear the Tamil voices embedded in the English prose, allowed us to understand people and communities far removed from our own lives. His was a distinctive and original voice," wrote Jo Kukathas, writer, director and actress, on Facebook.

Maniam was also highly respected in theatre circles, and was one of the founding members of local performing arts outfit Five Arts Centre. His original plays The Cord (1983), The Sandpit: Womensis (1990) and The Skin Trilogy (1995) are regarded as important contributions to the Malaysian performing arts canon. 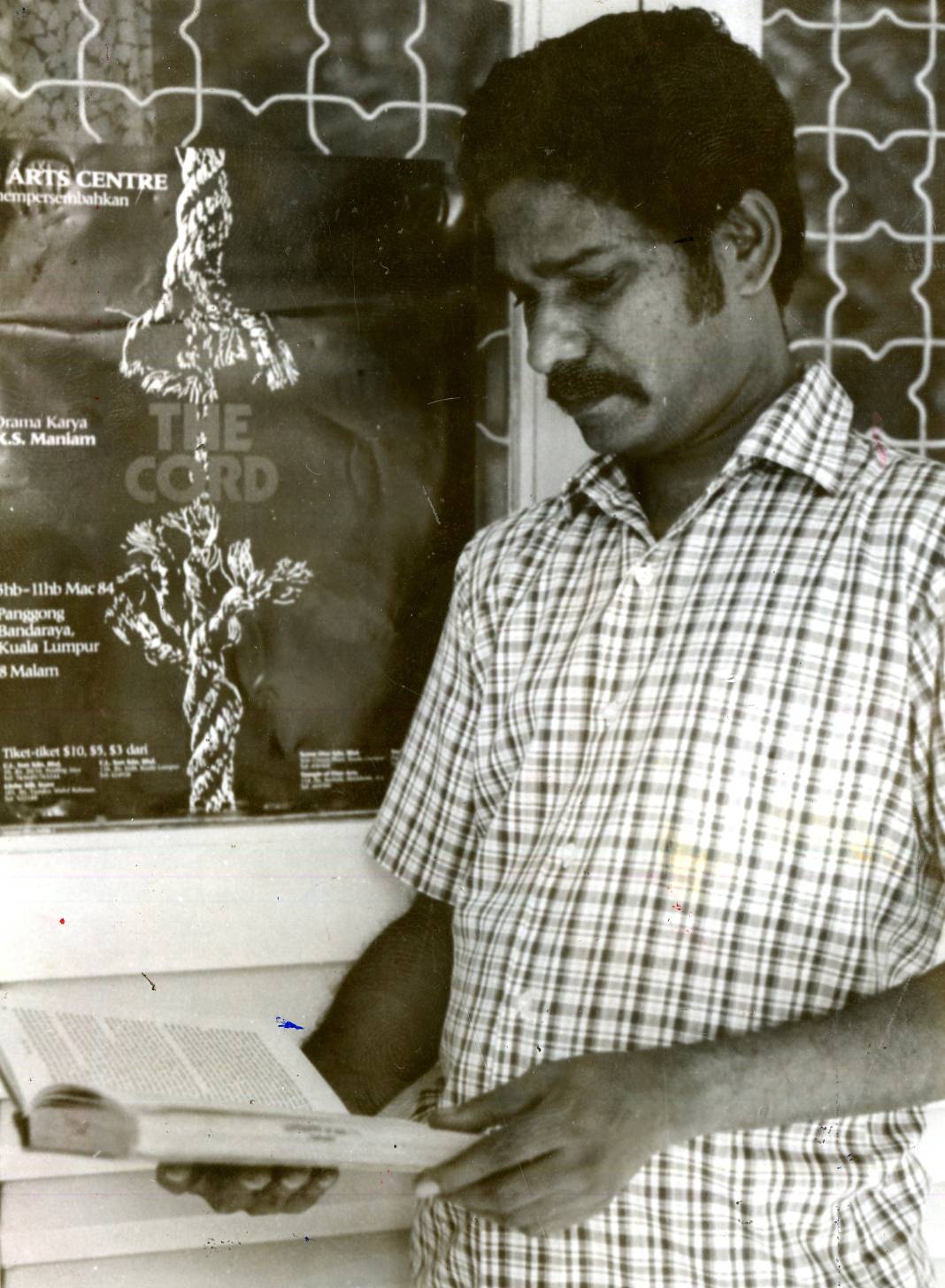 Maniam, as a playwright and founding member of Five Arts Centre, standing before a publicity poster of his play 'The Cord' in 1984. Photo: Filepic

"His iconic play The Cord launched Five Arts Centre in 1984, starting our journey of telling Malaysian stories. Against all odds we played to packed houses in the Old Town Hall (Panggung Bandaraya in KL). Over the years we did The Cord a few times, as well as Sandpit and Skin Trilogy. These plays were masterful, complex, deep, tough and unusual, exploring issues of race, class, power and the human psyche. We are indebted to K.S. Maniam for our Five Arts journey. Rest In Peace, dear Maniam," says Marion D'Cruz, pioneering contemporary dancer-choreographer, on behalf of Five Arts Centre.

On the academic front, Maniam worked in the English department of Universiti Malaya as a lecturer (from 1980-1985) and associate professor (1986-1997). In 2000, Maniam became the inaugural recipient of India’s Raja Rao Award for outstanding contribution to the literature of the South Asian diaspora.

Last year, Maniam was honoured at the K.S. Maniam's Writing: A Celebration tribute, organised by the University of Nottingham’s School of English (in Selangor) and Maya Press. The event saw the launch of the collection KS Maniam Selected Works.

“I feel great. Because they’re doing this in my own lifetime, isn’t it, and not after I’m gone. It’s a kind of double honour, that they recognised me while I’m still around, ” Maniam, known for his dry humour and sharp wit, was quoted in an interview with The Star last March. 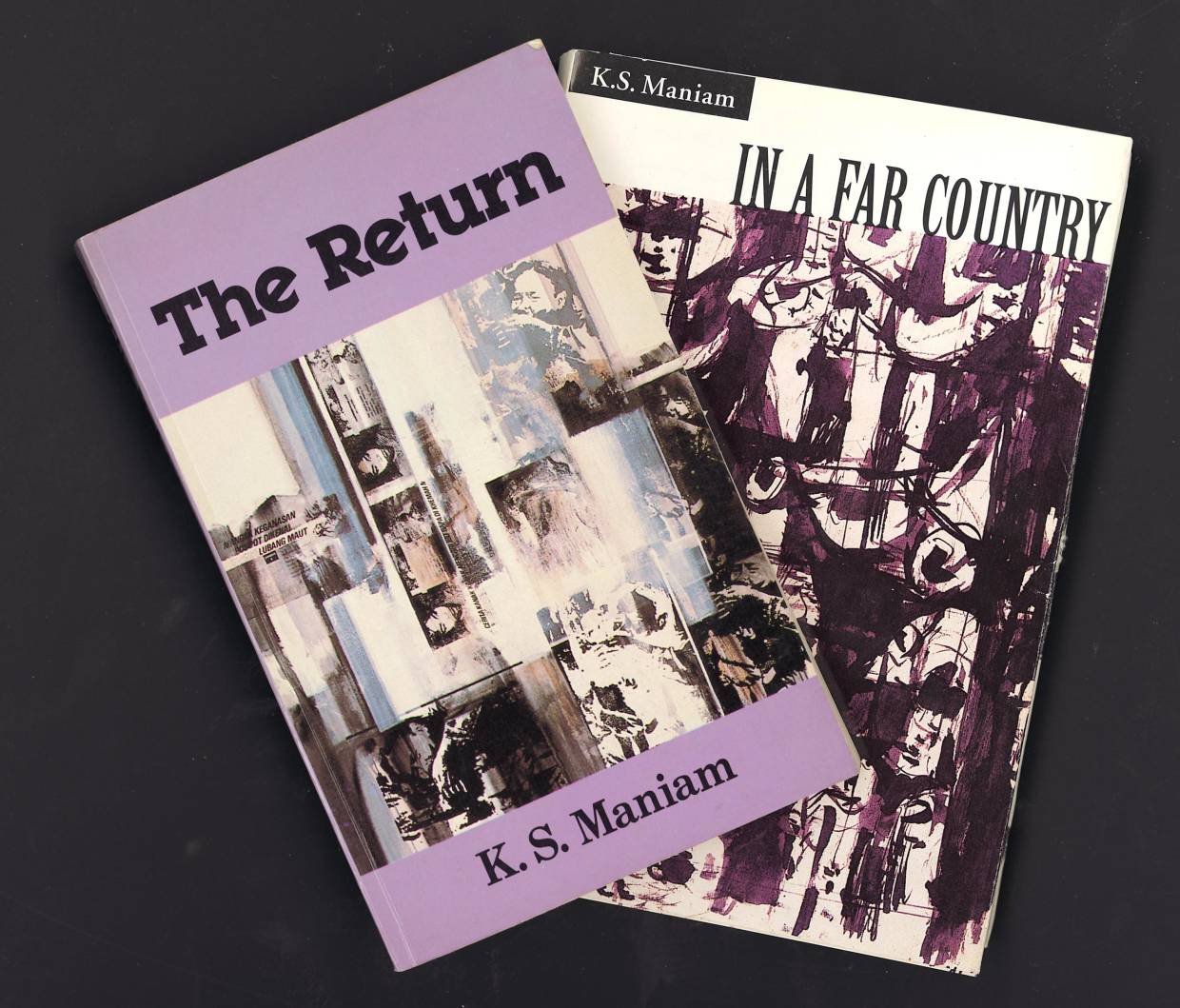 "When one thinks of Malaysian Literature in English and post-colonial literature, K.S. Maniam will be in the foreground of that literary canvas. He’s among the most studied and researched Malaysian writers worldwide. His achievements received so much international recognition but none from our governmental literary institutions. He did not hanker for any. He wrote because he loved writing. His work will testify to the wonderful writer he was, ” says Professor Malachi Edwin Vethamani (University of Nottingham School of English), a friend and fellow writer.

"K.S. Maniam was among the most important and distinguished Malaysian writers, with not much official recognition for his work. His books are not an easy read; his eye was unerring and unsentimental, insightful," says Manickam.

“A literary giant has left us. Rest in Power, KS Maniam, ” writer Bernice Chauly wrote in homage on Facebook.

Maniam leaves behind his wife, son, daughter and two grandchildren.