The Johor gambus used to feature motifs bearing Arab influence but Halidan wants to change this. He said he wants to bring the traditional instrument closer to this country by adorning it with designs of Malaysian fauna and flora, as well as black pepper which reflects Johor's identity. Photo: Bernama

No one is more excited than Halidan Ithnin following the recognition of the Johor gambus as a unique product of the district of Batu Pahat by the Intellectual Property Corporation of Malaysia (MyIPO).

Halidan, 54, who is well known here for the Johor "hadramaut" gambus that he makes, is confident the recent inclusion of Batu Pahat district in MyIPO's geographical indications (GI) register would augur well for the local gambus making industry.

The gambus is a short-necked, pear-shaped stringed instrument that is widely used in ghazal music, a popular genre in Johor.

GIs are any type of symbol or mark that are used to identify the country, region or area from which certain goods originate. Only producers carrying out their activities in the geographical area specified in MyIPO's GI register have the right to use a registered GI in the course of trade.

MyIPO's recognition of Batu Pahat and, in particular, its gambus industry will enable this traditional musical instrument to garner more attention. Its GI status, accorded in December 2019, does not come as a surprise as the gambus makers in this district have proven expertise in this field and continue to adhere to the traditional methods of making the craft. 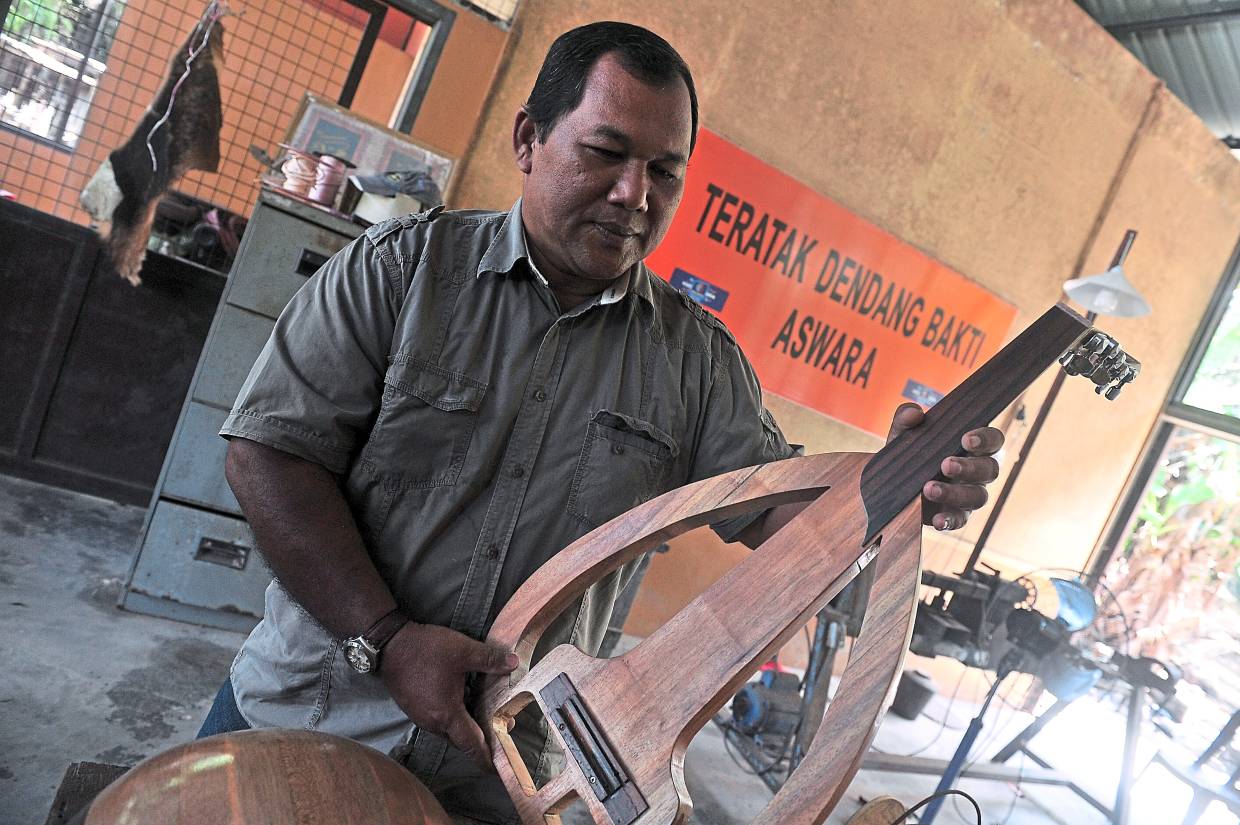 A handmade gambus can last up to 20 years but its durability boils down to the quality of the wood and glue that are used in making the instrument. Photo: Bernama

To render the gambus that he makes a local identity, Halidan, who has been making the instrument since 2000, only uses locally-sourced wood such as that of the rengas and merawan trees or soursop or ciku (sapodilla) fruit trees.

Gambus originated from Yemen and was brought to Johor by Arab traders in the past.

"I want to give the gambus a Malay touch, enhance its local characteristics and give it its own identity," said Halidan, whose late uncle Hassan Othman, better known as Pak Hassan, was a famous gambus maker during the 1970s.

"The wood I use is close to my heart. Spruce and mahogany wood are already well known worldwide, so why shouldn't we promote the specialities of our own local wood?"

The Johor gambus used to feature motifs bearing Arab influence but Halidan wants to change this. He said he wants to bring the traditional instrument closer to this country by adorning it with designs of Malaysian fauna and flora, as well as black pepper which reflects Johor's identity. 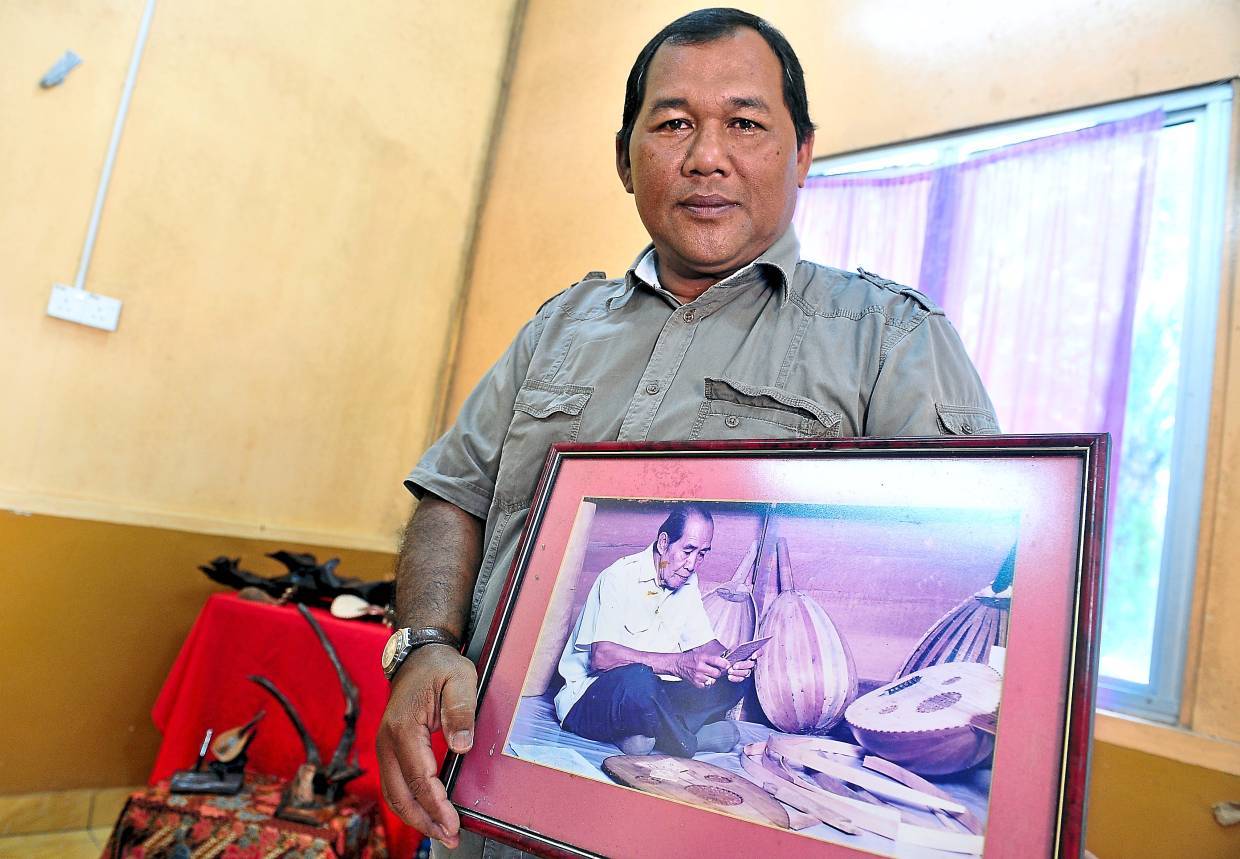 But when it comes to making the gambus, the father of three, who used to be a part-time lecturer at the National Academy of Arts, Culture and Heritage (Aswara), prefers the traditional methods and still makes it by hand.

He learnt the art of making the instrument by just observing his uncle Pak Hassan, who he regarded as his own father as he had been living with him from the age of three.

"During the time Pak Hassan was involved in making the gambus, I used to make two types of gendang (drum). I would sit beside him and observe him and ask a few questions. That's how I developed an interest in making the gambus," said Halidan, whose workshop is located at his house in Senggarang here.

Halidan himself is not adept at playing the gambus but he has his own technique to ensure that the sound made by his instrument is of good quality. He also makes it a point to get feedback from gambus musicians.

"People who are involved in the world of gambus are able to get the techniques and the 'soul' (of the instrument) right," he added. 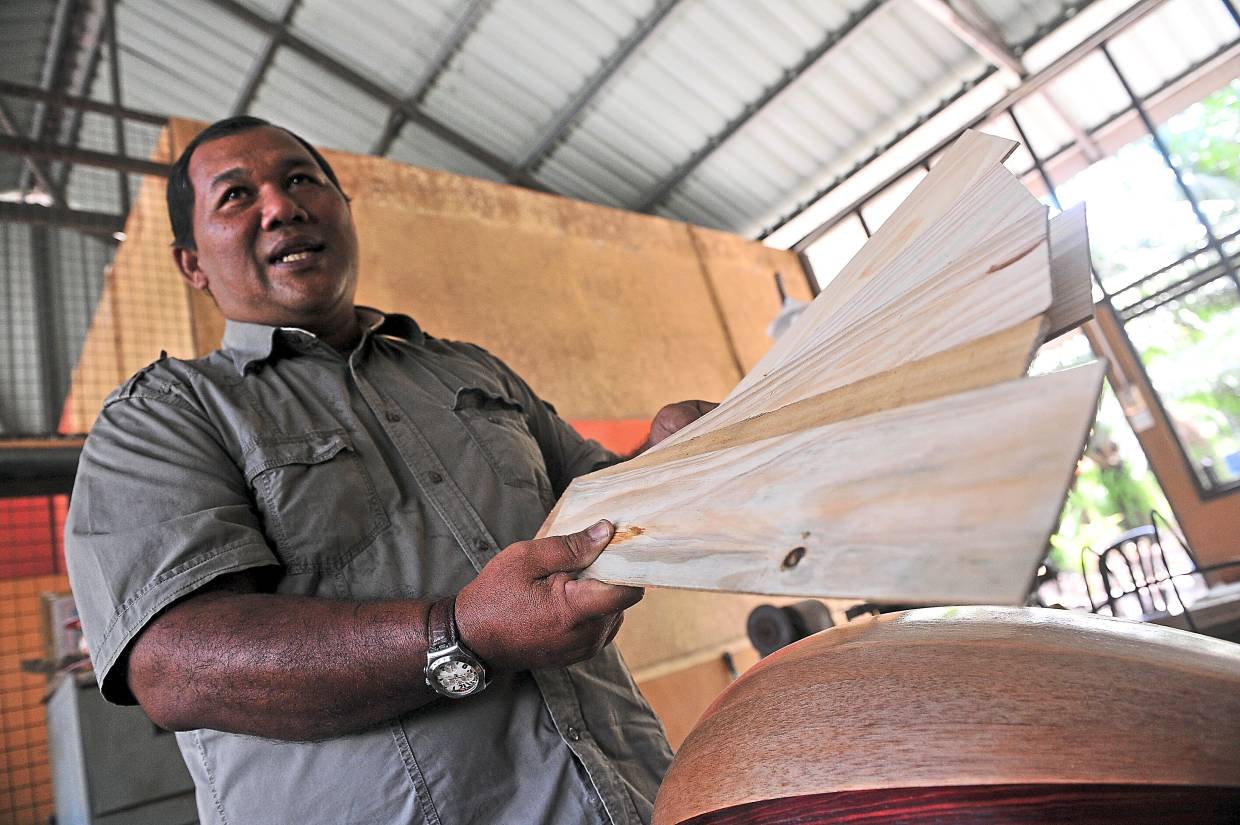 Halidan, who has been making the instrument since 2000, only uses locally-sourced wood such as that of the rengas and merawan trees or soursop or ciku (sapodilla) fruit trees. Photo: Bernama

A handmade gambus can last up to 20 years but its durability boils down to the quality of the wood and glue that are used in making the instrument.

"Certain types of glue used overseas may not be suitable for our climate and weather. The glue we use plays an important part and the gambus we make can last longer if we use the correct type of glue," he said, adding that it can take two weeks or even up to three months to make each piece.

Halidan, meanwhile, aspires to produce a book on the making of the gambus. He already has the materials for the book but lacks writing skills.

"I feel there is a need for a book that can teach the public how to make the gambus," he said, adding that more research has to be done on the historical background of the instrument.

He said he is also open to collaborating with other interested parties to document the making of the gambus.

"The gambus is a national heritage but we are weak when it comes to documentation. I hope this heritage is preserved and monitored... in fact, it will be better if it is made part of our nation's identity," he added. – Bernama 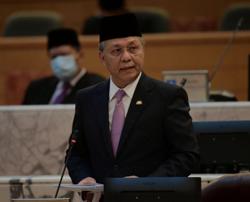