The rise of plant-based meat in Asia

Nearly 80% of Asians now believe plant-based meat is here to stay, and many are receptive to eating it in place of meat, or to reduce their meat consumption. — IMPOSSIBLE FOODS

Just over a decade ago, American plant-based meat producers like Beyond Meat and Impossible Foods seemed like the archetypal outliers dreaming of big things that no one had ever heard about, much less thought was possible.

The two were the earliest producers of plant-based meats and launched their products in an era fraught with skepticism and disbelief.

Fast forward a decade later and both brands are behemoths in the plant-based alternative protein space which has become both crowded and lucrative.

Global growth has been so positive that a recent report by Boston Consulting Group and Blue Horizon Corporation indicates that although alternative proteins accounted for 2% of the world protein market in 2020, this figure is likely to go up to 11% by 2035.

This means that in under 20 years, nearly 1/10th of the protein consumed around the world will potentially take the form of an alternative protein.

What is plant-based meat?

Of these available options, plant-based meat has been the most visible and successful since first hitting mainstream consciousness 10 years ago with the introduction of Impossible Foods and Beyond Meat’s realistic burger patties. Like many of the new plant-based meats, Beyond Meat sausages offer a rewarding flavour experience that nearly exactly nails the qualities of the original version. — BEYOND MEAT

Since then, the plant-based meat market has gained the bulk of investments – USD2.1bil (RM8.6 bil) in investments in 2020 (paired together with plant-based egg and dairy) compared to USD360mil (RM1.4bil) for cultivated meat and USD590mil (RM2.4bil) for fermentation companies, according to data released by The Good Food Institute Asia Pacific (GFI APAC), a non-profit organisation that aims to expedite growth of the alternative protein sector.

This is buoyed by an increasingly global consumer base, introduced to these products via a growing number of fast-food chains, supermarkets and restaurants around the world.

So what are plant-based meats? Plant-based meats, also known as meat analogues are essentially plant-derived products designed to closely resemble the physical appearance, taste, texture and structure of their original protein counterpart, whether that’s chicken, beef, lamb or other animal products.

The products are usually fashioned out of a range of ingredients that can include grains and legumes including soy, wheat, rice, peas, chickpeas, lentils and mung beans which are converted into flours, isolates and concentrates. Flavours, colour components, minerals, carbohydrates and fats like coconut oil and canola oil are often also included in the overall formulation. Plant-based meats are made up of a range of ingredients that can include soy, pea, wheat, legumes, minerals, flavours as well as fats like coconut oil or canola oil. — IMPOSSIBLE FOODS

To concoct a believable product both in terms of taste and texture, plant-based meats typically go through either one of two processes – dry extrusion or wet extrusion, which basically enables plant proteins to combine with other ingredients to form a successful formulation while eliminating unwanted flavours, aromas and textures.

“Ultimately, the choice of creating plant-based alternatives using dry or wet processes is a market decision. High-moisture products can provide better texture options such as meat-like fibres but will also require cold chains to be distributed. Dry products can travel, be stored more easily, and later be rehydrated, making it often more suitable for business-to-business distribution. Supply chains will decide which ones fit their needs best, ” says Adrien Beauvisage, head of region for South-East Asia and Oceania for Bühler, a Swiss multinational company which specialises in food technology.

While the initial success of plant-based meats was centred in America and Europe, plant-based proteins have very quickly established a firm footing in the Asia Pacific region, an acceleration that has been fuelled in part by the Covid-19 global pandemic, which has driven changes in consumer perception, awareness and general enthusiasm for plant-based meats.

This increased acceptance of plant-based meats was at first generated by a fear of eating animal products spurred by reports that the Covid-19 virus might have originated from the consumption of wild animals in a market in Wuhan, China.

But on a larger scale the pandemic has caused a seismic shift in thinking, with many Asians now more informed and interested in issues like sustainability and health. This interest has also been enhanced by increased availability of plant-based meats and improvements in the taste and texture of these proteins. An increasing number of Asians are embracing plant-based meats and the Asia Pacific region is set to have the largest share of the plant-based market by 2025. — IMPOSSIBLE FOODS

“There is compelling evidence that the global pandemic further accelerated a shift towards alternative proteins that was already gaining steam across Asia Pacific. During the first two months after the coronavirus outbreak, Hong Kong-based plant-based meat company Green Monday reported that online sales more than doubled.

“Similar surges were documented in Korea and other major Asian markets, which helps explain why investment in Asia Pacific-based alternative protein companies was 600% higher in 2020 than 2019, ” says Mirte Gosker, the acting managing director of GFI APAC.

Research published by nutrition company Herbalife Nutrition in December 2020 backs these claims up. The study polled 8,000 people in the Asia Pacific region and found that 41% of respondents, especially in Malaysia, Thailand, Indonesia and the Philippines now display a greater openness to plant-based food options.

Meanwhile, another study conducted by DuPont Nutrition & Biosciences found that 78% of Asians now believe plant-based meats are here to stay.

This turn of events is interesting, because plant-based meats are not actually new in some parts of Asia, like China. In fact, old-school soy based mock meat and plant-based meat replacements like tofu and tempeh have been around for eons. The difference is, these products catered to niche, often domestic markets and never really gained an international audience.

The 2.0 versions of plant-based meats on the other hand, seemed to have reeled in not only vegan and vegetarian fans but also meat-eaters who want to make meaningful changes to their diets, in line with the growing flexitarian and reducetarian global movements. According to plant-based egg producer Eat Just’s founder Josh Tetrick, “The demographics for Just Egg in South-East Asia are similar to those who enjoy the product in the United States and elsewhere in the world.

“They’re 21-50-year-olds who care about eating a little bit better when they’re at home or on the go and realise their food choices not only make them healthier but contribute positively to the world around them. When the choice is delicious, convenient and accessible, switching to plant-based is easy.”

While broadening the mass market appeal of new-fangled plant-based meats will be pivotal in expanding its reach in Asia, in many ways, many countries in the region already have an advantage, having been exposed to conventional plant-based meat replacements for ages now. It is this familiarity with plant-based meat substitutes that is likely to accelerate the movement in Asia a lot quicker than many other regions around the world.

In fact, Zion Market Research’s 2020 report indicated that by 2025 (a mere four years away), the Asia Pacific region will hold the largest share of the global plant-based market due to familiarity with soy-based vegan proteins as well as growing environmental consciousness.

“The demand and familiarity with meat alternatives already exists in Asia, which allows a new generation of meat alternatives, with better taste and nutrition profile, to grow even faster, ” affirms Beauvisage.

Other success stories include Malaysian-based Phuture Daging, which sells minced meat made out of soy, rice, peas and chickpea protein that is available in Singapore and Malaysia; Hong Kong start-up OmniMeat, which makes meat strips, mince and luncheon meat crafted out of shiitake mushrooms, pea, soy and rice and has a presence in Thailand, Singapore and Malaysia; and South Korean brand Unlimeat’s plant-based beef, made from surplus grains that would otherwise be discarded. Unlimeat has successfully penetrated a few key markets like Hong Kong and even the United States.

Conventional legacy brands like Nestle have also stepped up their game in Asia. Nestle’s Harvest Gourmet plant-based meat range in South-East Asia is processed in a new purpose-designed plant-based facility in Shah Alam, Selangor – the multinational giant’s first plant-focused space in the region. 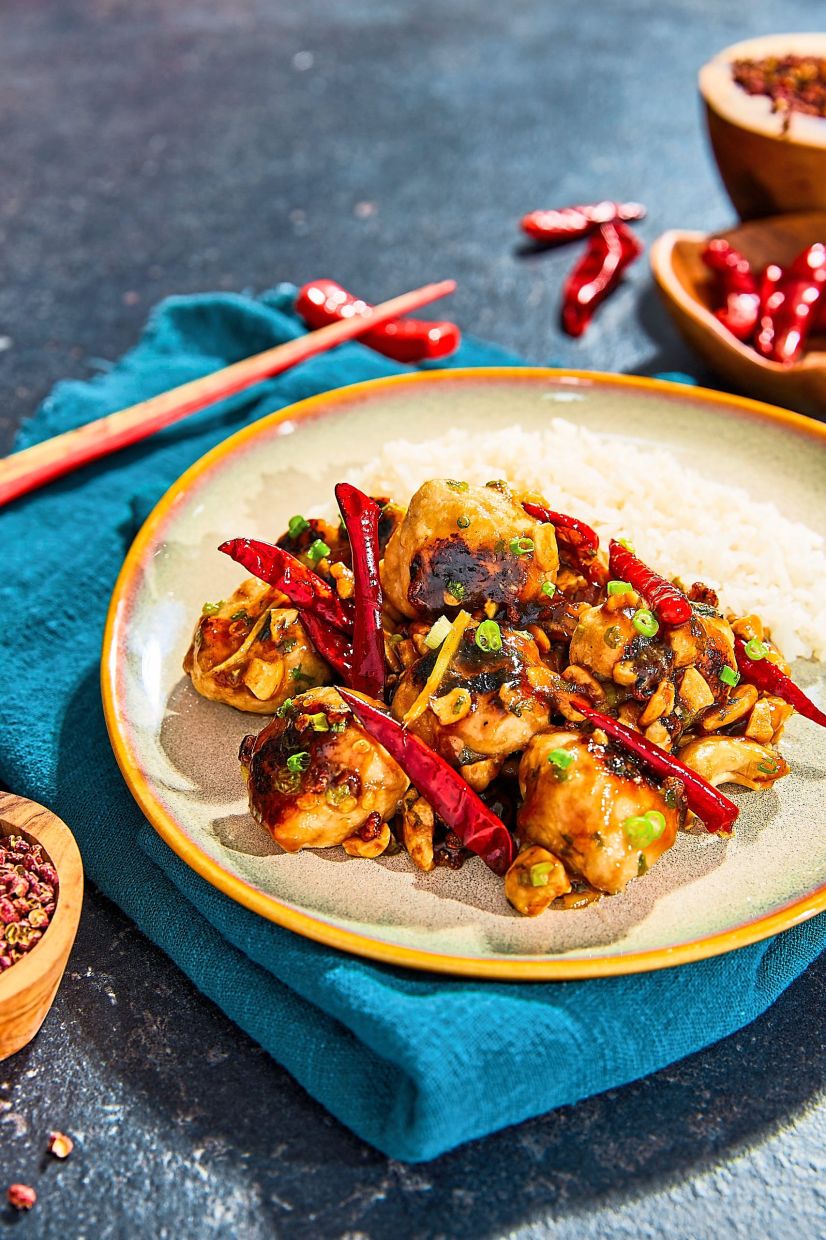 But perhaps nowhere has the growth and interest in plant-based proteins been more viscerally seen and felt than in Singapore, which has dashed ahead in the alternative protein game. The Singapore government has a $100bil (RM309 bil) plan to prepare for the effects of the climate crisis, and tangential to that is the goal of producing 30% of its own nutritional needs by 2030 (Singapore currently imports about 90% of its food).

To facilitate this, the government has encouraged and nurtured a reputation as a food tech capital, which in turn has facilitated its rise to becoming the regional (and potentially global) epicentre of alternative proteins.

This has translated into a slew of homegrown Singapore start-ups venturing into this lucrative field from Next Gen Food’s Tindle brand of plant-based chicken to Karana’s whole-plant jackfruit replacement meats.

The country has also attracted numerous international brands and organisations looking to make their mark in Asia, with Singapore as their home turf.

Innovative plant-based egg producer Eat Just for example, is building its first and largest plant protein production facility in Singapore and in December 2020, the company became the first in the world to get regulatory approval to sell lab-grown meat to Singaporean consumers.

More recently, in April 2021, Swiss brands Buhler and Givaudan which respectively specialise in technology and food flavours, combined forces to launch the Protein Innovation Centre (PIC) – the first of its kind in Asia to accelerate plant-based foods.

The centre is a one-stop space with all the equipment required to produce and test new products and the expertise to expedite product development. This technology and expertise is open to start-ups, researchers and manufacturers in Asia interested in producing plant-based alternatives and scaling production, ultimately allowing new players to make faster and more successful market entries.

“By 2050, the global population will reach nearly 10 billion people and global food demand will soar by more than 50%. This will happen in challenging circumstances due the increasing impact of climate change. Finding all the protein needed to feed this ever-growing population will be a challenge, including in Asia, where roughly half of the world’s population is located. “A change in our protein diet – relying less on animal protein and more on plant-based protein – is seen as one of the most potent ways we can achieve food security. It would free up large amounts of arable land and water for human consumption.

“To make it happen, it’s important that large population centres get access to plant-based products and consume larger numbers of plant-based proteins, including meat substitutes. Singapore, placed at the centre of South-East Asia and known for its cuisine derived from several ethnic groups, is a strategic location to make sure that new products developed in Asia find their audience, ” says Beauvisage.