Tham says for sauces and other liquids, he typically measures the amount that is required for each plate, so that his team doesn't end up putting too much and ruining the dish. - ART CHEN/The Star

It is nearly lunchtime on a clear, sunny Monday and the kitchen at critically-acclaimed fine-dining restaurant Nadodi is a hive of activity. There are six hours to go before the restaurant even opens its doors to diners, but the team is already busy – darting seamlessly around each other as they do all the things that are required to hold together a fine-dining restaurant that typically serves between nine to eleven courses per person each night.

In the centre of this hubbub is head chef Sricharan Venkatesh, who is hunched over a plate, his face a rictus of focus and concentration. One hand is moulded around a large chef’s tweezer, which he uses to delicately position a tiny little edible flower, seemingly the final touch to the dish. 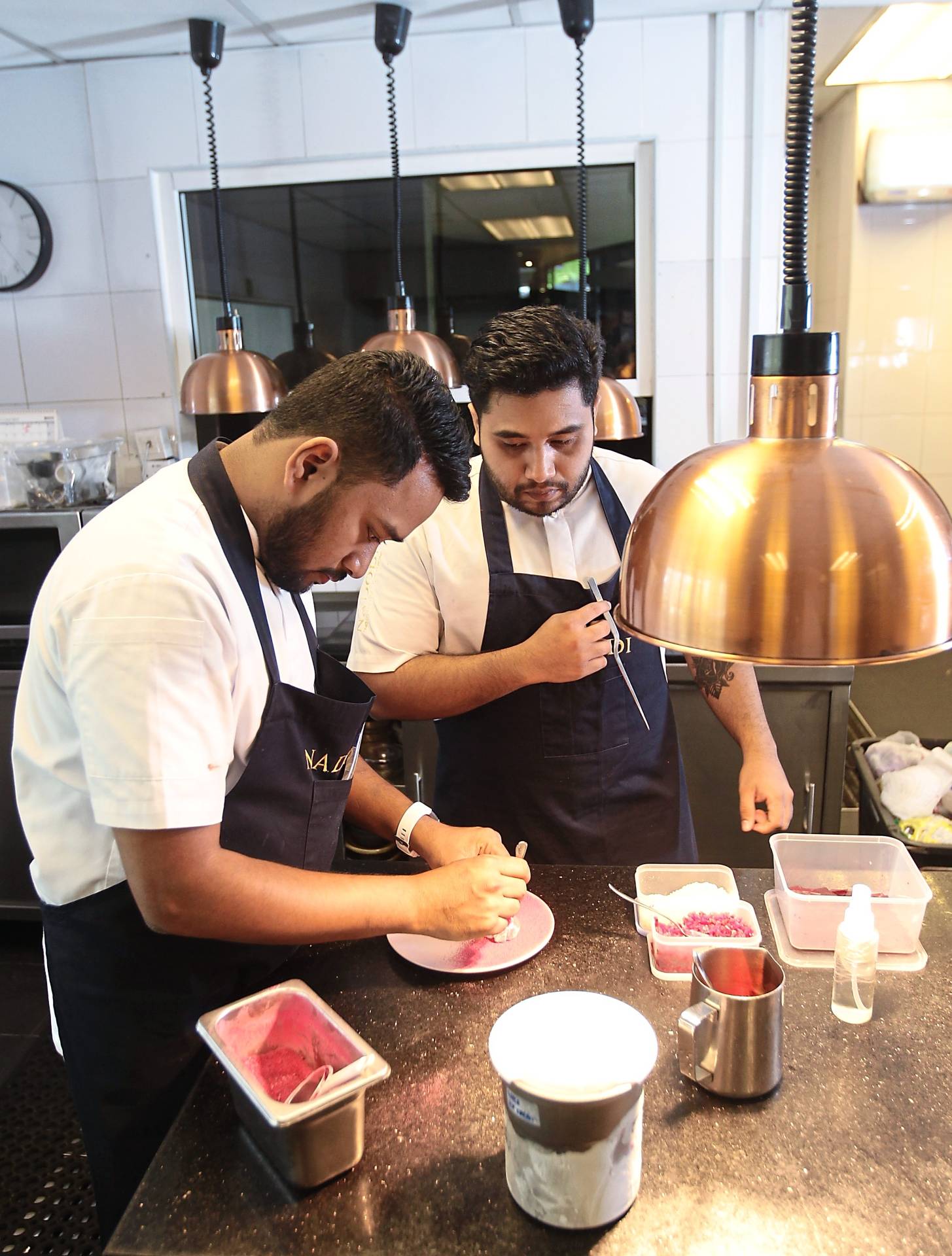 The plate is gorgeous – a dark brown fish sauce at the bottom is arranged to look like the map of a country. The sultry caramel brown hue is punctuated by bursts of green, courtesy of the peas and herbs placed strategically around the topography of the sauce. Laid atop is a perfectly rectangular slice of fish, which is itself topped by a spiral of fried noodles. On top of all this gloriousness is the delicate edible flower. It looks lovely – like a tiara gracing a beautiful face.

But Sricharan isn’t satisfied. “It doesn’t look right, ” he says as he plucks the flower off and peers into a container, searching for a better-looking option.

Trying again, he places another (admittedly brighter looking flower) atop and this time, he seems satisfied. “Okay, this is done, ” he says smiling.

Although the actual plating has only taken a few minutes, the effort that has gone into making the meal look (and taste) good is telling of just how much work top chefs now put into presenting plated works of art.

According to an article in Bon Appetit magazine, it was 18th century French chef Marie-Antoine Careme who first popularised the idea that food could be twisted and turned into works of work. An amateur student of architecture, he was at one point the chef de cuisine for Napoleon Bonaparte and was credited with creating dishes in shapes as intriguing as waterfalls and pyramids.

In today’s world, top chefs have taken that initial idea formulated by Careme and modernised it with the times. These days, 21st century plated meals from the best restaurants in the world can take all sorts of shapes and forms from Virgilio Martinez’s nature-inspired triumphs in his famed restaurant Central in Peru (ranked #6 in the World’s 50 Best Restaurants 2019 list) to Grant Achatz’s dramatic, stunning plated wonders at his three-Michelin starred Alinea. 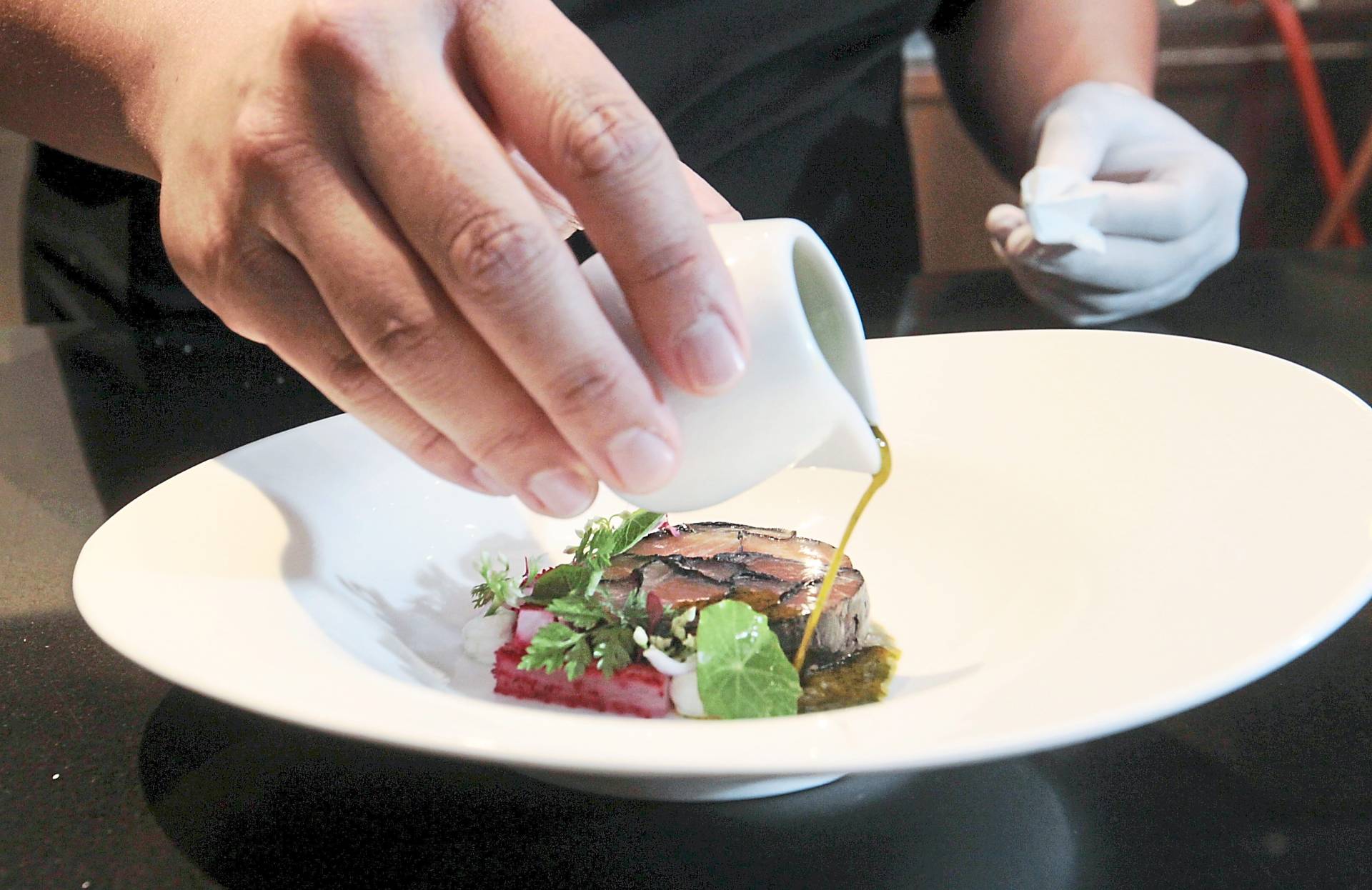 Tham says for sauces and other liquids, he typically measures the amount that is required for each plate, so that his team doesn't end up putting too much and ruining the dish.

In Malaysia, top chefs also go through pains to put together beautiful meals. The first step in crafting these elaborate dishes is also the most obvious one: brainstorming and thinking up ideas.

Inspiration can abound in a multitude of things, including a chef’s own personal favourite meals. Isadora Chai, who helms the highly respected French fine-dining restaurant Bistro a Table, says her deconstructed apple pie for instance, is a result of components that she likes.

“My favourite part of the apple pie is the end of the pie, because it has the highest ratio of crust to apple, and I prefer the crust. So that’s why I thought ‘Why don’t I make an apple pie where the crust and the apple are separate and then only during service, I assemble it together so the crust is never soggy.’ So that is what I thought of when I did this dish, ” says Chai.

For others, ideas spring to the mind based on cultural familiarity. Sricharan’s meen curry for example, alludes to the thick fish curries of south India (where he is from) but have been reconfigured in new surrounds. 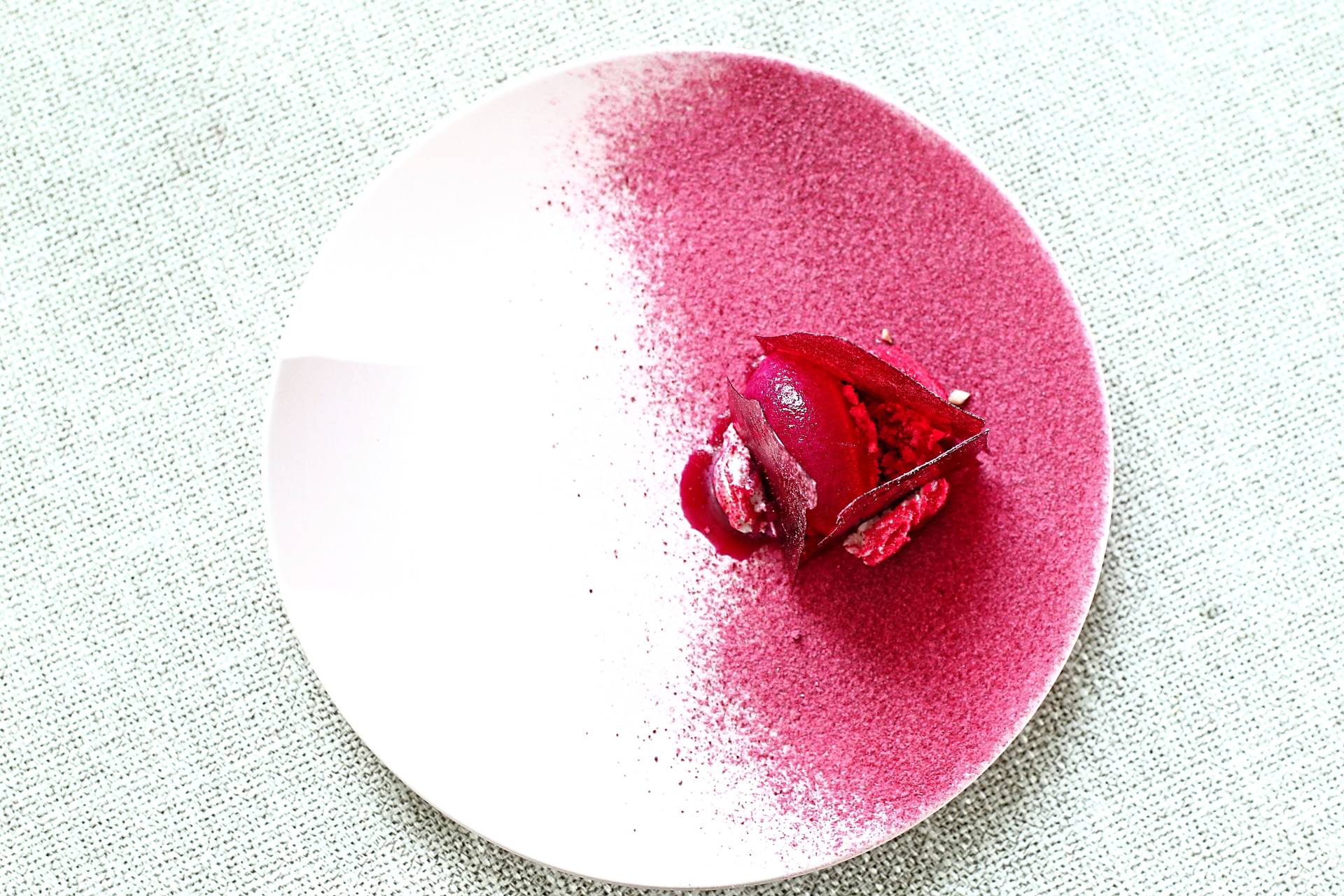 “Meen curry is actually kolambu, which is very thick. So the sauce is made from a fish stock and it’s more like a southern Tamil Nadu style of fish sauce and then we have a spice called ajwain that we use and some fermented garlic, some rice crisps and then a local red snapper, which is steamed and encrusted with dried coconut and roasted rice, which is then torched slightly. So it is like actually having rice, fish and curry at the same time – just in a different form, ” he says.

Sricharan also adds that coming up with a dish is not something he does alone – the entire team is involved in the process too. “The idea and the concept is always a team effort. It has to be that way, because that is the only way you can grow chefs also, ” he affirms.

Once a chef has conjured up a dish in their minds, they set about trying to get the taste and look of the dish as perfect on the plate as it in their heads. This includes figuring out elements like the size and dimensions of each ingredient, as well as choosing the correct plates and bowls for particular dishes. 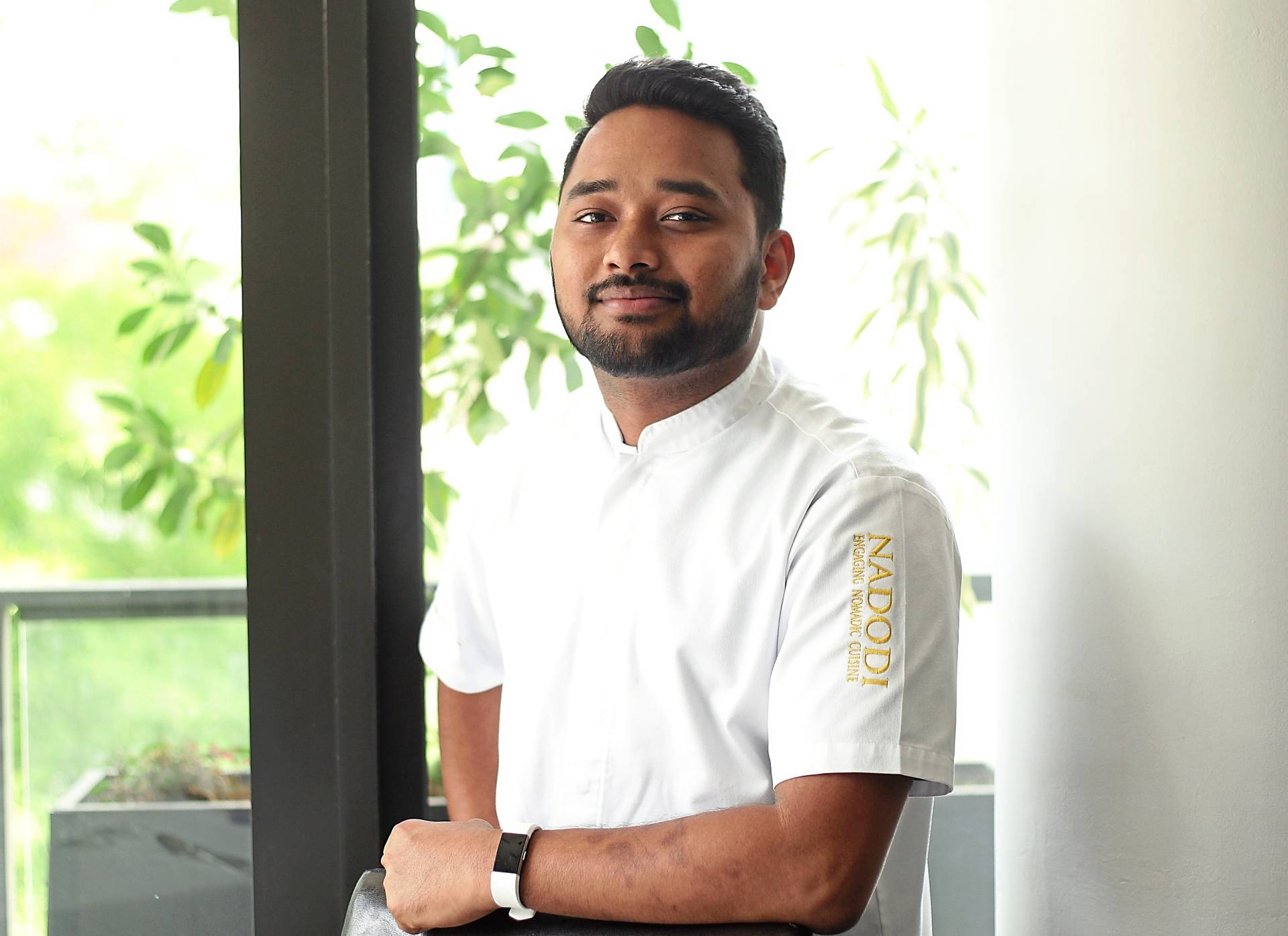 Sricharan likes to play around with colours and different kinds of plates for his dishes as he likes being a little more artistic with his plates. — AZMAN GHANI/The Star

“A good dish must be as symmetrical as possible. When you’re cutting a piece of meat or fish, for example, it has to be as perfect a cut as possible without any rough edges, because without this perfect cut, no matter how you plate it, it’s not going to be pretty. It’s a very small detail but it does contribute to the finer plating, ” says the affable Raymond Tham, who helms the award-winning modern European eatery Skillet.

Sricharan meanwhile says he likes playing around with different kinds of plates and colours, so diners don’t get bored of seeing too many of the same colours and designs while sitting through a multi-course degustation. 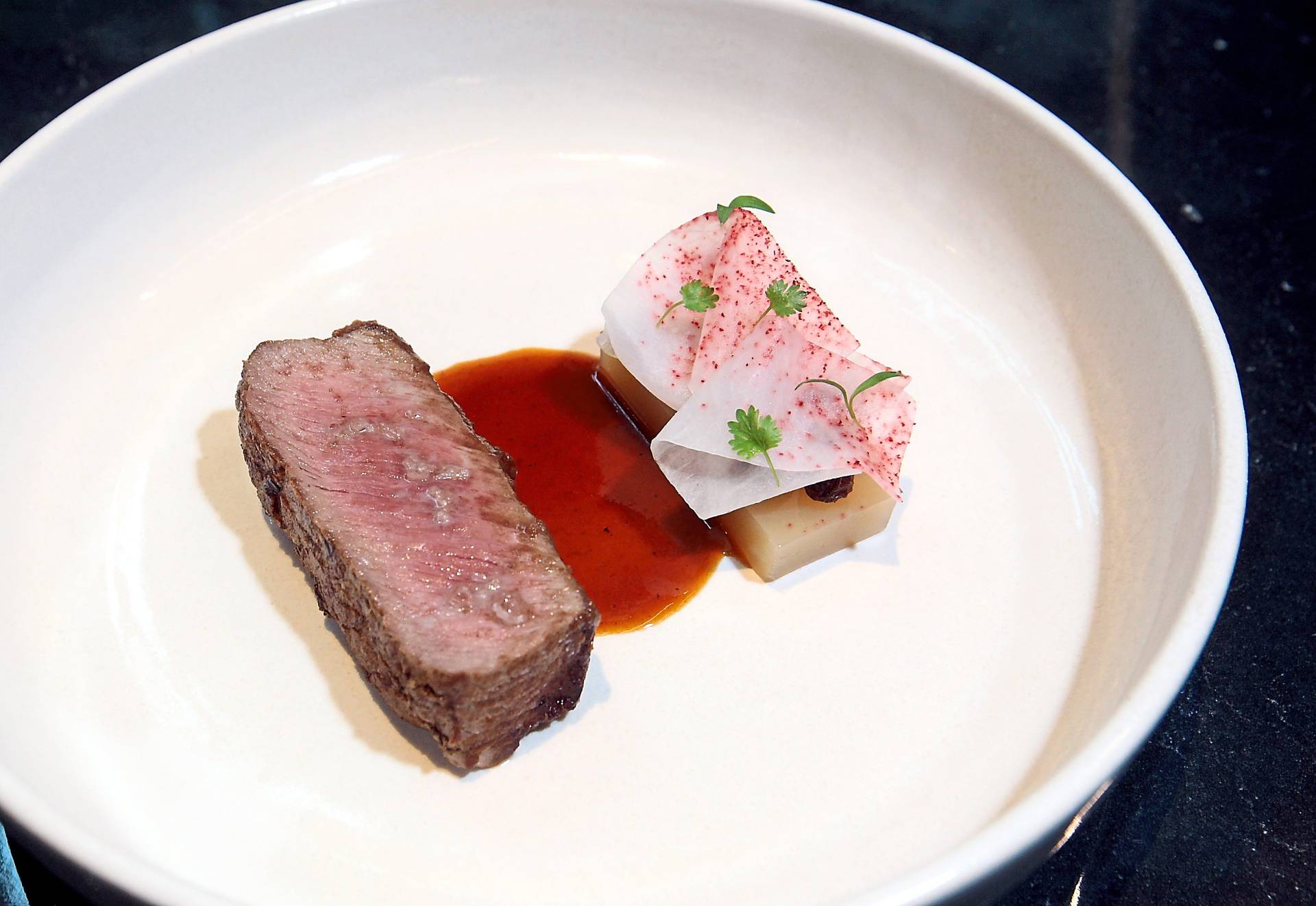 Tham’s plate of pan-seared lamb loin with fermented plum, apple jelly and whisky-soaked raisins is an example of the minimalist style that he now favours which just shows off good ingredients.

“My plates are mostly handmade and include some that I designed myself with a local ceramist. For me, I think plates need to have different dimensions to it, otherwise it becomes too monotonous. I look for variation in terms of depth and height – which helps to elevate the dish in different forms.

“I also feel it’s necessary to showcase different colours on the plate because you’re going to sit for two hours, you’re going to see all the plates coming and you need some colours, otherwise it kind of gets boring, even for myself, ” he says, laughing. Tham also pays attention to details like the colours of his plates and how they meld with the restaurant ambience. “Sometimes it depends on the restaurant environment. We’ve just recently renovated Skillet and our tables are now black so we can’t use too many black plates – we try to use more of the white ones instead, so diners have some visual contrast, ” he says.

Plating styles also depend on the chef – Sricharan for instance is a huge fan of off-centre plating as he doesn’t like things that are too “obvious or organised”. Tham meanwhile is now a fan of clean, minimalist plates while Chai has a thing for dots artfully arranged on the plate.

The final product that appears on the table also takes many rounds of fine-tuning and refinement before chefs are satisfied with the end results. “We practise many times, to be honest with you! To start with, some of the dishes have been plated six or seven times at a minimum until we feel it is right. And even when we agree on the final plating and think, ‘Okay this is good’ sometimes throughout the service, we might feel like there might be things we should tweak, ” says Tham.

Before serving a new dish, Tham even goes to the extent of doing a mock table service, setting up a table and putting his newly constructed meals on it to see how they are likely to appear to diners.

“When you plate a meal in the kitchen, it’s a bit different from how the customer looks at it. So after we plate it, we set up the full table service and we put it on the table and have a final look to see if it matches or not, ” he says.

When a dish has received the nod of approval, it goes on the menu and diners then place their orders. Come service time, the entire team is prepped and ready to plate the meals.

The first and most important step for many restaurants is to ensure all the plates are clean. Some chefs like Tham use a combination of vinegar, water and paper towels to carefully clean plates until they are gleaming and no fingerprints or remnants of oil linger. 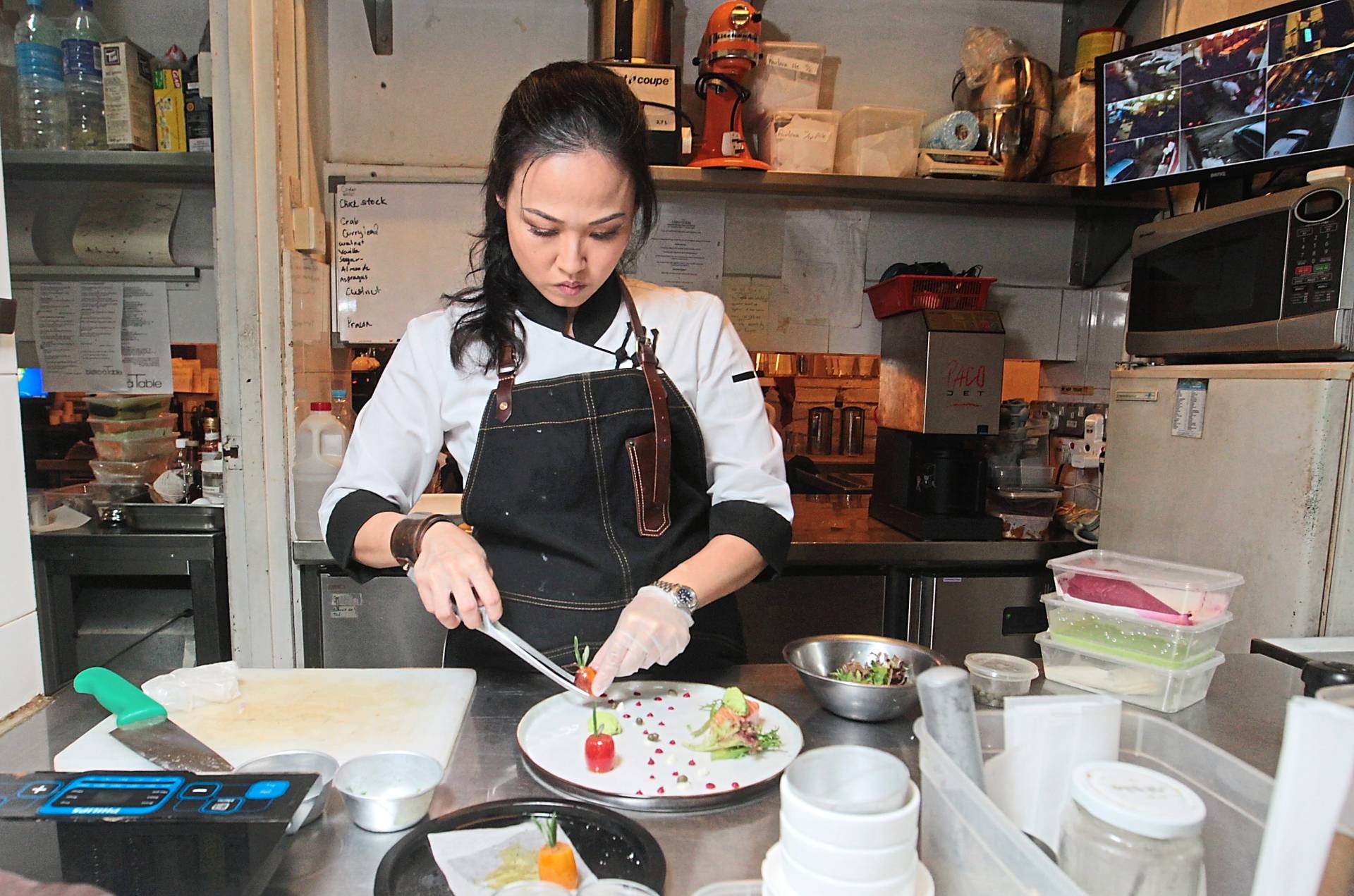 During busy periods, chefs are required to plate meals fast, and Chai has learnt how to plate a meal in about two minutes.

Knowing his customers’ predilection for fervent food photography, he also warms up plates intended for the main course, so that the food remains warm long after the cameras have stopped clicking.

Once the plates are cleaned and primed, it is go-time. In many instances, this is made easier because portion sizes have already been pre-determined. Tham for example, ensures that the weight of the meat or fish on his plates is exactly the same to avoid complaints from guests about consistency issues and also to ensure the restaurant’s food bill doesn’t overrun.

“Normally we have a weighing scale for the meat and for sauces, we have a measuring jug, so normally we pour it out based on the amount we’ve come up with. Because for something like the sauces, if someone pours too much of it, the dish may not taste how we want it to, ” says Tham.

Chai meanwhile, says that at the plating stage, she simply ensures that her team gets the soul of the dish she has created right. 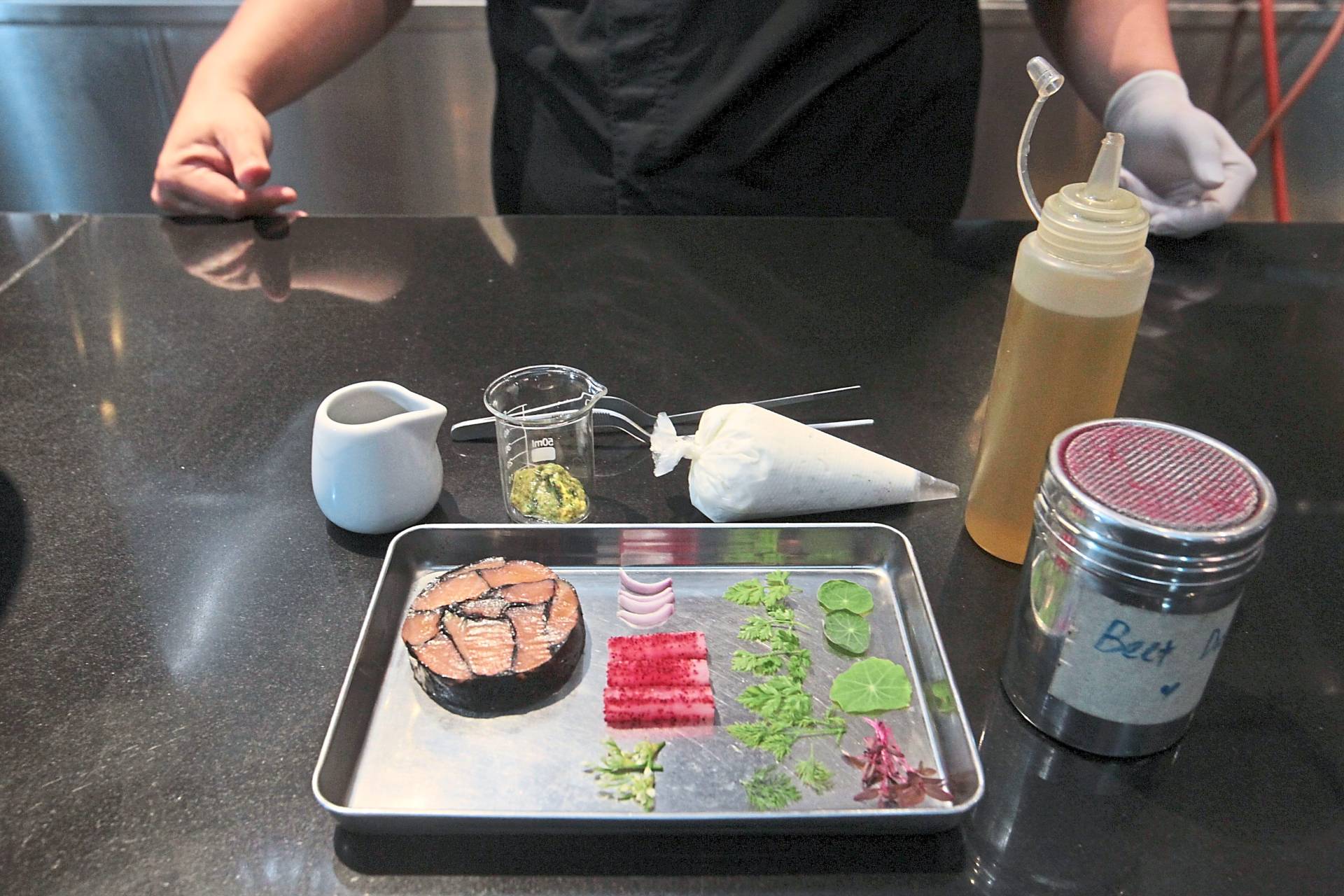 Chefs practice their plating so much that during service time, when they have all their components ready, they can plate a meal in a matter of minutes.

“I’m not going to insist that you must put 26 dots on each plate, but it should have the essence of the dish and it shouldn’t veer too much off, ” she says.

Because the team has already practised plating each dish many times before, at this stage, it only takes a few minutes to put together a plate to send out to diners.

“Each course takes five to six minutes per plate and the proteins might take a little longer, because it needs to cook as well so it’s close to around eight to ten minutes for that, ” says Sricharan.

Chai meanwhile works even faster. “During rush hour service, our plating would be no more than two minutes, ” she says.