The importance of being moderate 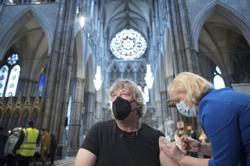 THE 19th century playwright and wit, Oscar Wilde, who wrote the successful play, “The Importance of Being Earnest”, made his name by playing with words in contradiction and double meaning.

Earnest was not just the name of a principal character in the play, but also meant being determined. Wilde, a man of notable success and excesses, said “Moderation is a fatal thing. Nothing succeeds like excess.”

So are we living in a world of success or excess?

For the silent majority who go about earning our living and leaving politics to the politicians and religion to God, it seems that the world is becoming more and more polarised – fundamentalism is on the rise and extremism is winning.

Unfortunately, the 21st century is an Age of Uncertainty, when even science is no longer sure of anything. With our spacecraft and super-telescopes, we looked out further and further and realised that there were not only more and more universes out there, but also black holes that we cannot understand.

With our microscopes, we see smaller and smaller things and then realised that even the smallest particles disappear into energy and concepts we are only just beginning to appreciate, let alone measure.

If we believed in Hollywood, an American way of life would be nirvana. There are many in this world who are no longer so sure. Such a life of materialist consumerism is possible for the few, but certainly not for the majority.

It is this Age of Uncertainty that has created polarisation and extremism in views and excesses. We are not sure where to go and he who shouts loudest appear to have the most attention.

A lot of this has to do with democracy. No one disagrees that democracy has become the accepted ideology of our age. Even Robert Mugabe of Zimbabwe accepts the principle of democracy – after all he has won every election he has participated in, but not everyone would agree with his methods of governance.

The arithmetic of democracy is very simple. If everyone has a vote, then the majority gets to decide who governs for a fixed term. However, if the voting is very close, meaning that the votes are very evenly split, then the smallest of minority with extreme views becomes the deciding vote. And both sides which need the deciding vote may be willing to accede to such extreme views in order to win their support. The radical Tea Party in the US was able to be very influential because of their ability to swing votes. They almost caused a default in US bonds, because of their extreme position on fiscal discipline.

A time of uncertainty breeds extremist views and action. When society as a whole is insecure, all kinds of views get into play. The risk is that extremism breeds more extremism.

Take a situation where society is very stable and the ruling party is a strong majority, secure in its position. The political scientist Mancur Olson (1932-1998) examined different forms of governance. He identified the situation where an “incumbent bandit”, even a tyrant, is likely to provide stability in property rights and protect the majority’s rights, because he identifies the majority views with his own.

Saddam Hussein was such an incumbent bandit, but is the present state of deteriorating democracy and civil war any better outcome those who have to live under bombs and destroyed homes?

The commentator Fareed Zakaria has argued that one should distinguish between democracy and constitutional liberalism. The common definition of the former is periodical free and fair elections with one person one vote. The other is the practice of law and order according to the constitution, but the constitution need not be established by the rules of the former. After all, people tend to forget that when the American Constitution was written, those who had the vote excluded women, Afro-Americans and indigenous Americans.

In recent years, fractious politics in America and elsewhere has raised the spectre that the form of democracy practiced there may lead to an unsustainable situation of increasing fiscal deficits through welfarism, because the government must always increase welfare in order to win votes.

Fareed argued that Hong Kong was the most revealing example of the above distinction – “it had one of the highest levels of constitutional liberalism in the world but was in no way a democracy.” Thailand is a case where democratic politics have created a situation when the army decided that its presence is needed to restore order.

The reality therefore is that democracy as practiced would require everyone to means that one must take into consideration the views of others. Politics is after all the art of the compromise.

Each nation must find its own path to national unity and integrity. Former Malaysian Prime Minister Tun Abdullah Ahmad Badawi said it best, “We have followed a path of moderation, development is our priority, national unity, good community relations, Muslims and non-Muslims, this is what has given us the advantage”.

To compromise is to take a moderate position. Hence, those who take extreme views must always remember that the moderates are in the majority. They may be silent, but they also know that if they allow extremists to hold sway, their future and their children’s future are at stake. If extremist views take hold, then even the silent majority may decide that moderation is worth fighting for.

Oscar Wilde always had the last word: “Everything in moderation, including moderation.”