Will the plan by the Government to build an incinerator in Kepong at the current National Waste Transfer Centre affect property prices?

According to various real estate professionals who declined to be named, yes. The effect on property prices will not be just over the short to medium term, but over the longer term as well.

“It is a major consideration. Who wants to live near a major source of pollution?” he asks.

Their comments bring to mind the plight of a relative several years ago. She bought an apartment off-plan for about RM200,000 before the price hike which started in 2010. The project was accessible via Bukit Jalil Highway. She did not check what was in the area before she signed on the dotted line. When the development was completed, she stayed for less than a year. She moved out and within a short while, she sold it because she was unable to get it tenanted. More than half of the units were unoccupied. 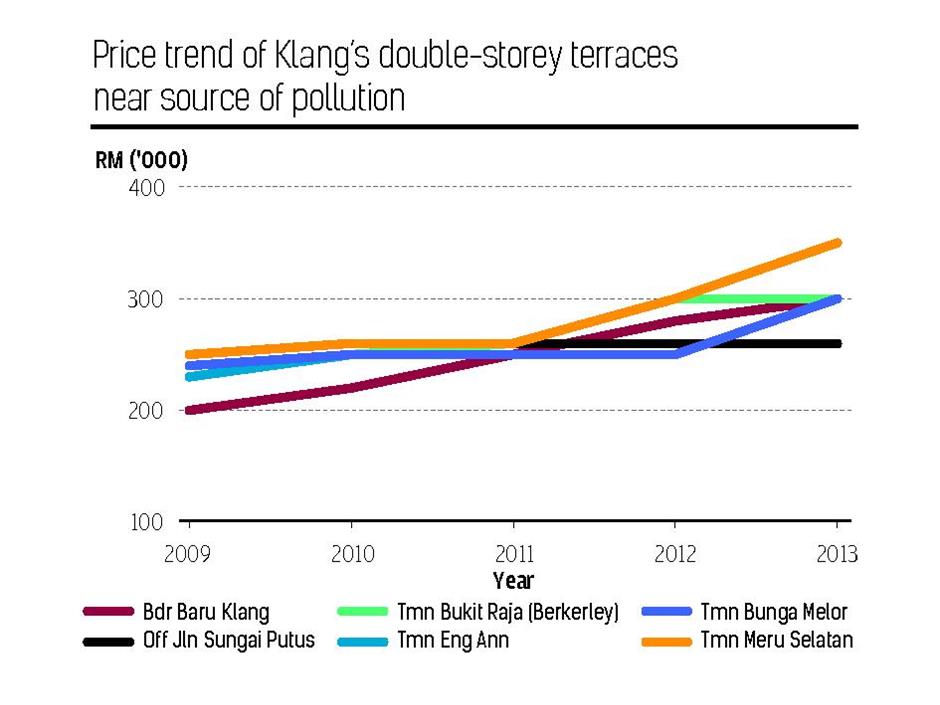 The apartment was located a few kilometres from a dump site. Although she cannot see it from her living room balcony, the smell of rubbish was perpetually in the air. That dump site was a major source of air pollution.

According to a real estate professional who wants to remain annonymous, the steel plant in Klang is a major source of pollution, which explains why certain areas located near the plant showed little or no price appreciation.

“These townships were located about 4km from a steel plant. Double-storey housing in Taman Chi Liung, Taman Sri Andalas and surrouding townships about 10km away from the plant enjoyed higher price appreciation by comparison,” he says.

“People are wary of areas where there is a major source of pollution,” he says. The same agent says Rawang had the same negative perception. A cement factory there has been a major source of employment for decades.

The entry of various developers into Rawang has resulted in more developments in that area, chiefly due to soaring land prices in and around Kuala Lumpur the last couple of years. 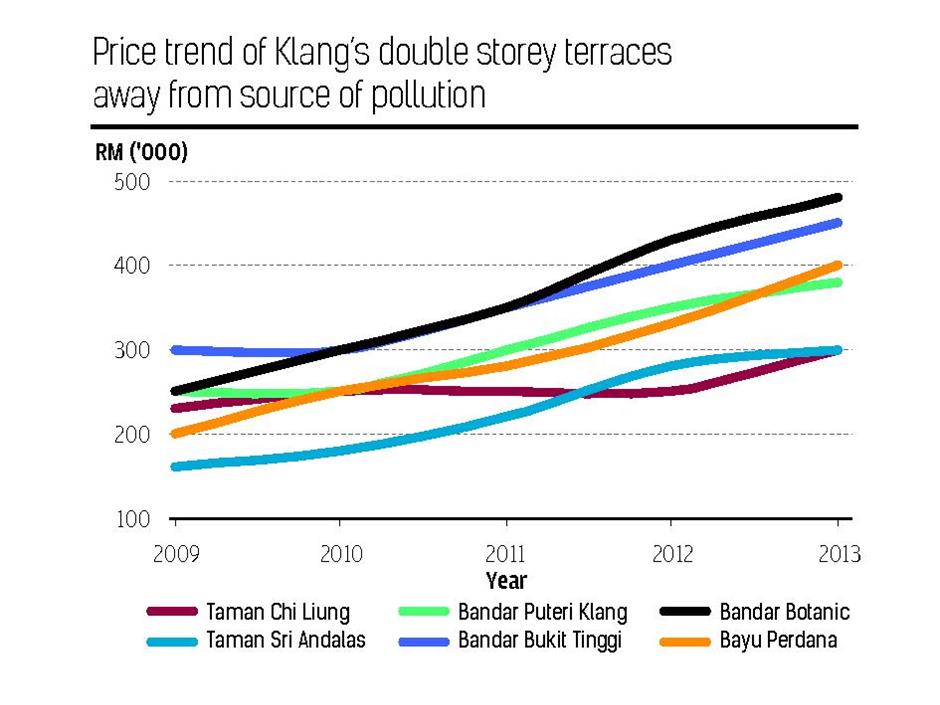 A second source who declined to be named says locating the incinerator in the national capital will have several implications. “It will not only bring down property prices in the short and medium term, but it will dampen prices over the longer term beyond the 5 to 10km radius because incineration will produce very fine ash gas. These pollutants will be dispersed over a wider area beyond the 15km radius although the closer you are to the source of pollutant, the worse off you will be. That is only logical,” he says.

“Pollutants do not travel on roads. There are in the air and settle on food. It impacts locations right up to Bandar Utama and Taman Tun Dr Ismail which sit on the 10km radius. When we travel by car, we get the perception that TTDI is very far away. If we were to travel in a straight line from the proposed site, Taman Tun Dr Ismail and Bandar Utama are just 10km from the proposed site of the incinerator,” says a real estate source.

The source says the incinerator will also impact banks as most properties are purchased with debt. “The banks think nothing of the incinerator project because they think it is someone else’s problem. It will impact them because people buy properties on borrowed money. When the property value goes down, the banks are impacted,” says the valuer.

Another property source says for such a major project to be located in the national capital, a detailed environmental impact assessment (EIA) must be done and the results made public.

“The people must be engaged, not just within the immediate surroudings but further afield as ash and particles are airborne,” he says.

“For the longest time, the Government has been talking about making Kuala Lumpur the top 20 most livable cities in the world.

“There must be some criteria upon which this aspiration is based.

“Will having an incinerator help the Government towards this end?

“How does Singapore manage their waste? Before we embark on such a project with so many implications, it is only prudent to study the matter further,” he says.

During a drive to the national waste transfer centre located off the Middle Ring Road 2, lorries can be seen entering and leaving the centre. The air is foul. Less than 1 km away is the Metropolitan Park and about 4km away is the Selayang Hospital.

Over at Taman Beringin in Kepong, located behind the National Waste Transfer Centre, is an on-going construction of several blocks of low cost flats.

About 1,600 units are being developed. According to the notice board on the current construction site, the owner of the project is the National Housing Department (Jabatan Perumahan Negara). It is a project by Urban Wellbeing, Housing and Local Government Ministry (formerly Housing and Local Government Ministry). Next to the construction site are several similar looking but older flats, which are already occupied.

A contractor says some of the 1,600 units will be ready this year. The air in this area is also foul.

The question is, why is the government building so many flats next to the National Waste Transfer Centre, a major source of air pollution? The occupants of these flats will be living with foul air 24 hours a day, seven days a week.

According to a resident in the area who wants to be known as Miss Liau, the National Waste Transfer Centre has been there for years.

About 2km away from the proposed incinerator site are two new projects, EcoSky by Eco World Development Group Bhd

Both of them are located adjacent to each other in Taman Wahyu, Kepong. EcoSky comprises about 940 units and has a gross development value (GDV) of about RM1bil while Lakeville comprises 1,800 units and has a GDV of RM1.15bil. Lakeville is 50% sold. Both projects are expected to be completed in 2018.

Other significant projects within the 8 to 10km radius include Naza group’s KL Metropolis, located in the Matrade area in Segambut and Kwasa Damansara project, about 10 km away, in Sungai Buloh. Kwasa Land, a unit of the Employees Provident Fund, is the master developer of the 943ha.

The current role played by the National Waste Transfer Centre is to receive waste from Petaling Jaya and the Federal Territory daily.

These waste are then transferred to the Bukit Tagar Sanitary Landfill (BTSL), located at the outskirts of Kuala Lumpur.

The primary function of BTSL is to receive and dispose municipal waste of Kuala Lumpur and Selangor. The landfill has been in operation since April 1, 2005 and receives 2,500 tonnes of municipal solid waste daily. BTSL has been designed to receive up to 5,000 tonnes per day of waste and has a 120 million metric tonnes capacity.

It is capable of receiving and treating waste from Kuala Lumpur and Selangor for over 65 years. If it continues to dispose Kuala Lumpur waste only, it will last 130 years.

The landfill is developed by KUB-Berjaya Enviro Sdn Bhd, a joint venture company between Berjaya Corporation

The National Waste Transfer Centre, where the incinerator is to be sited, is only 3 hectares (7 acres).

“Look at the numbers in its proper perspective. You have a landfill far from the city on 700 acres, with a considerable lifespan to accept 2,500 tonnes of rubbish.

“And you have a 3-hectare site in the city in a densely populated area to incinerate 1,000 tonnes of rubbish with an initial investment of RM1bil, with wide-ranging negative implications,” says the source.

A visitor to BTSL says the landfill is “free of smell”. “It is really sanitary,” he says.

This same visitor says if the government wants to build an incinerator, the people must first be taught to separate their garbage.

“Plastic, metal and paper can be recylced. Japan and Taiwan took decades to educate their people.

“Today, if you visit Tokyo, there are no rubbish bins around. You take your rubbish home with you. Are we ready (to separate our garbage)?”

“The next question is maintenance. We are known to build things, but not to maintain them,” he says.

·The people we spoke to for this story requested anonymity. 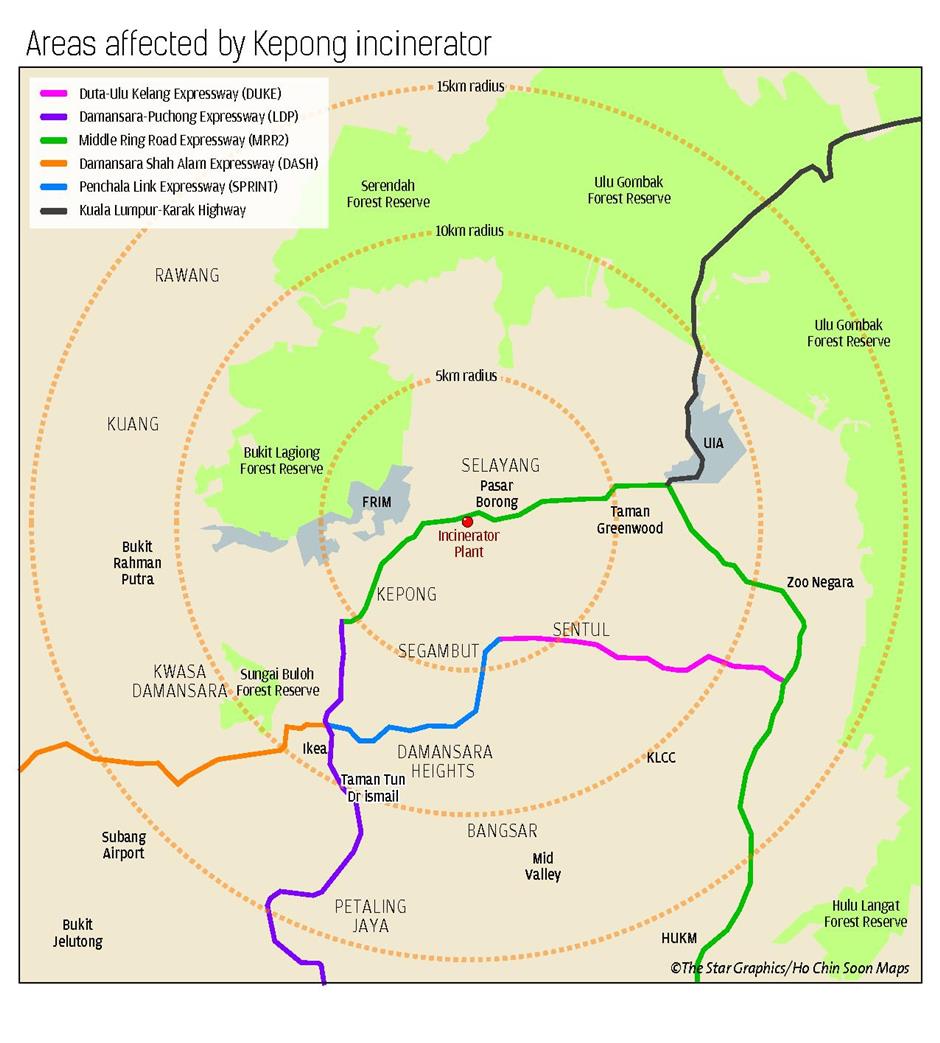