Fired up: Protesters burning tyres while others carry a banner that says ‘Kamayut strike will be the fight to the end’ in Yangon. — AP

THE Kachin Independence Army (KIA), one of Myanmar’s most powerful rebel groups, said it had shot down a helicopter after returning fire following airstrikes by the military, an official at the group said.

The United Nations estimates that tens of thousands of civilians have fled their homes as a result of the fighting between the military and ethnic insurgents in remote northern and eastern frontier regions.

The KIA’s information department head, Naw Bu, yesterday said the helicopter was shot down around 10.20am near the town of Moemauk in Kachin province.

“The military council launched airstrikes in that area since eight or nine this morning... using jet fighters and also fired shots using a helicopter so we shot back, ” he said by telephone.

News portals MizzimaDaily and Kachinwaves also reported the downing of the helicopter next to photographs showing a plume of smoke coming from the ground.

A resident in the area, who declined to be named, said by telephone that four people had died in hospital after artillery shells hit a monastery in the village.

Reuters could not independently verify the reports.

A number of Myanmar’s myriad ethnic rebel groups have come out in support of the anti-coup protest movement, offering shelter and even training to activists who have fled the crackdown, AFP reported.

The Assistance Association for Political Prisoners (AAPP), a local monitoring group, said at least five civilians were killed in operations to break up protests on Sunday.

AAPP said it was the highest single-day death toll since an Asean summit on the crisis last month.

A total of 765 civilians have been killed in the crackdown, according to the AAPP, though the military disputes the toll, giving a much lower figure.

More than 4,500 people have been arrested, the monitor has said, including dozens of journalists.

Yesterday – World Press Freedom Day – a group of foreign embassies in Myanmar condemned the junta’s treatment of journalists, saying they had become “targets of repression”.

Myanmar has been in turmoil since the coup, with protests almost daily against military rule.

On Sunday, security forces opened fire on some of the biggest protests in days, killing eight people, media reported.

The protests, after a spell of dwindling crowds and what appeared to be more restraint by security forces, were coordinated with demonstrations in Myanmar communities around the world to mark what organisers called “the global Myanmar spring revolution”.

The military said it had to seize power because its complaints of fraud in a November election won by Suu Kyi’s party were not addressed by an election commission that deemed the vote fair.

Suu Kyi, 75, has been detained since the coup with many other members of her party. — Agencies 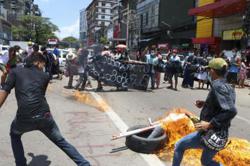