His finger of steel 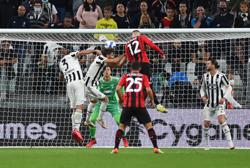 A Johor kung fu master has earned fame and set world records for a feat using his index finger.

WHEN kung fu master Ho Eng Hui shows you his index finger, don’t be offended. He’s not being rude – usually, he is just showing you his “weapon”.

This incredibly powerful finger can pierce coconuts – through the husk and shell, right down to the coconut water.

And he proudly declares: “This finger of mine actually helps me raise my family!”

Ho, 58, is referring to his twice weekly street performances at Jonker Street in Malacca, an attraction for locals and tourists. His feats have brought him fame and earned him a place in the record books, including the Malaysia Book Of Records and the Guinness World Records. Other than newspaper reports and television appearances, Ho and his finger were also featured in the Lonely Planet travel guide, highlighting the sights at the Jonker Walk Night Market.

Since 2000, the Malacca government has given Ho a spot in Jonker Street to perform and hawk his medicated oils. He travels from Johor Baru to perform there on Friday and Saturday nights (8pm to 9pm). Prior to that, Ho performed tourism shows in Bugis Street, Singapore, between 1991 and 1995. 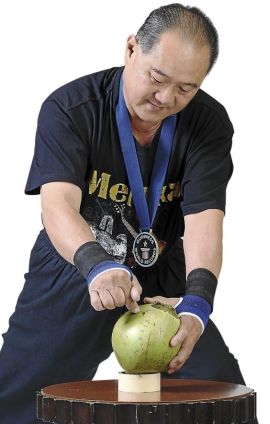 Ho secured a place in the Malaysia Book Of Records on Feb 2, 2001 when he pierced three coconuts in one minute and 10 seconds at Dataran Merdeka in Kuala Lumpur.

On June 21, 2009, he pierced four coconuts in 30.81 seconds in Jonker Street, Malacca. That feat put him into the Guinness World Records.

Two years later, on April 21, he broke his own record by piercing four coconuts in 12.15 seconds in Milan, Italy.

Before retiring from performing such feats, Ho, a father of two, wants to set another new record.

“I want to pierce four coconuts in 10 seconds and hope to get a sponsor before attempting the feat,” said Ho, who keeps himself in top form by walking. Every day, he walks a total of 20km in the morning and evening to build up his stamina.

Ho may not be fanatical about his diet but is watchful about what he eats. He prefers fish, vegetables and less meat. He also abstains from oily foods.

For a living, Ho sells his medicated oils for aches and pains. He learnt how to make them from his Singaporean kung fu master Choo Kong Leong.

“My medicated oils are sold in pharmacies, medical halls and mini markets in Johor Baru, Seremban and Kuala Lumpur,” he said.

Since 2008, he has registered his business as Ho Eng Hui Medical Hall in Johor Baru. He contracted a factory to manufacture the oils for him.

Ho first trained to pierce coconuts with his finger when he was 17.

“Choo told me to train in one-finger kung fu. At first, I was not very successful but I trained hard as I wanted to succeed,” he said. 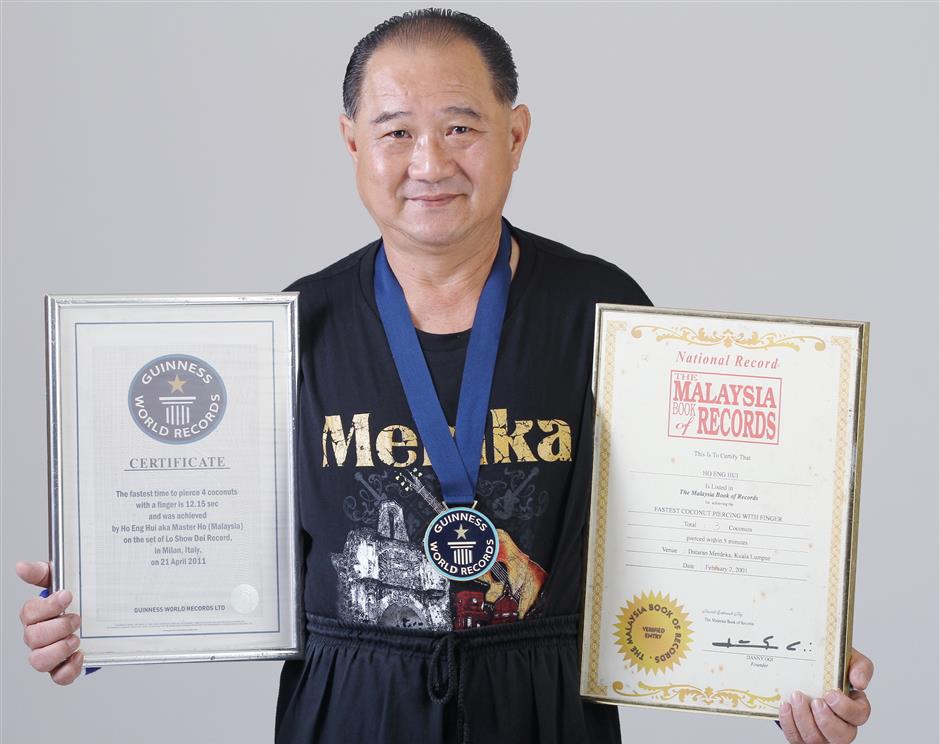 Ho with his Malaysia Book of Record and Guinness World Records certificates for piercing coconuts with his index finger.

It took him two years to pierce his first coconut. But afterwards, he had a swollen and painful finger.

“I did it every time I passed a banana tree. People said I was mad,” he reminisced.

But it was no pain, no gain for Ho. He kept training despite the pain and a medicated finger.

Later, he practised with cardboard boxes before the final test on young coconuts.

Ho learnt qi gong from Choo, who performed street kung fu stunts such as swallowing a metal ball (the size of a ping pong ball) and then spitting it out again. Choo also smashed coconuts using his head and allowed himself to be a punching bag.

On the day of the interview, Ho demonstrated how he focused his qi on a coconut, but declined to perform the feat saying he was unwell. His right index finger looked slightly bent. He has broken this finger twice in Singapore – in 1992 and 1994 – after which he took a six-year hiatus from piercing coconuts.

In 2009, he broke his finger again after a feat in Beijing, China.

“It was winter and I broke my index finger after piercing two out of five coconuts. I had to stop the performance due to excruciating pain and took a year off to rest,” he said.

But two years later, Ho returned to prove his mettle. He set a new record in Milan, Italy, after breaking four coconuts in the fastest time! 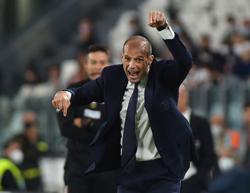